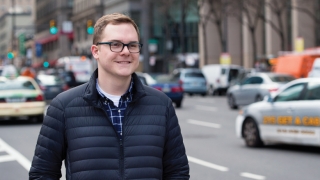 Around the time of her high school graduation, Laurie Ronan received the second cancer diagnosis she’s gotten in her life. Weeks later she had a seizure; as a result, her driver’s license was suspended. “All my friends were going away to college, and driving was one of the last little bits of freedom from my parents that I had,” she recalls. Instead, she became more dependent on them.

You can hear the chagrin in Ronan’s voice as she tells this story in an episode of the insightful CHOP-produced podcast “AYA Cancer Chat: Life Interrupted.” The podcast gathers a group of adolescents and young adults (AYA) for down-to-earth discussions about what they’ve gone through because of cancer, with the goal of helping current patients.

The idea came from 26-year-old Herbie Hickmott, who was diagnosed at 12 with a benign tumor on his optic nerve. Regular MRIs at CHOP showed no changes — that is, until he was a senior in college and the tumor started growing, threatening his vision. Chemotherapy followed.

At 22, Hickmott found himself sitting in a hospital waiting room full of little kids. “I didn’t want to be listening to Nickelodeon,” he says. What he wanted to hear was how others his age coped. So he spearheaded the creation of “AYA Cancer Chat.”

The topics of the podcast’s 13 episodes range from concerns over appearance to life as a germophobe. One episode is called “Don’t Tell Me I’m Brave.” Sarah Tucker, a Child Life Specialist, moderates the talks: “I help keep them on track if tough stuff comes up and make sure everyone feels comfortable.” Intimate subjects such as fertility get addressed, but the tone generally remains funny and poignant.

The podcast allows someone who’s feeling cut off from a normal teen life to sit alone and listen to a conversation full of relevant tips. For Hickmott, he says, “It’s been a very personal way to feel connected.”

Episodes are available at chop.edu/ayacancerchat, and more are in the works.