Knobella is able to breathe only with the help of a ventilator. Born 14 weeks early, weighing 1 pound, 2 ounces, she has lungs that are too immature to function on their own. She’s getting the best possible care from Children’s Hospital of Philadelphia’s Newborn and Infant Chronic Lung Disease (NeoCLD) Program, which treats more babies with CLD than any other program in the world. 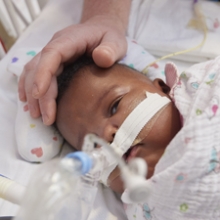 NeoCLD patient Knobella, 5 months, has graduated to an endotracheal tube as her lungs have matured. But while the ventilator is keeping her alive, it is also damaging her lungs. In the future, babies like Knobella will, hopefully, have another treatment option: liquid ventilation.

It’s counterintuitive, but filling the lungs with a special liquid called perflubron is a path toward healing CLD and improving these preemies’ futures.

Recently, the NeoCLD Program was designated a CHOP Frontier Program, along with the Mitochondrial Medicine program and the Center for Pediatric Airway Disorders. Beginning three years ago, CHOP committed to giving exceptional, cutting-edge programs financial support, plus guidance from a multidisciplinary steering committee. The Frontier Programs have made world-changing discoveries, delivered lifesaving therapies and provided exceptional care.

“These programs are distinguished by outstanding patient care combined with associated translational research,” says Joseph St. Geme III, MD, Physician-in-Chief at CHOP. “They have the potential to have a major impact on childhood health.”

The NeoCLD Program began clinical trials of liquid ventilation in November. While the baby remains on the ventilator, the lungs are filled with perflubron, which delivers oxygen to the tiniest air sacs where ventilator-delivered air can’t reach. The improved oxygen flow allows doctors to decrease the pressure and amount of oxygen delivered through the ventilator, lessening lung damage. At the end of treatment, the perflubron evaporates and the lungs function better.

“I know it works because I saw it work,” says neonatologist William Fox, MD, who has spent the last 25 years working on liquid ventilation. During a trial at CHOP in the 1990s, 17 infants were treated successfully. But all liquid ventilation trials in the United States were halted in 1996 due to poorly designed adult studies. Fox has now received Food and Drug Administration approval to resume his trials in premature infants.

The potential to change the outlook for children with severe chronic lung disease is one reason the NeoCLD Program was selected as a Frontier Program. Another is the comprehensive care babies with CLD receive in our Harriet and Ronald Lassin Newborn/Infant Intensive Care Unit.

“Other NICUs can take care of a just-born preemie,” says neonatologist Huayan Zhang, MD, Medical Director of the NeoCLD Program. “But they don’t have the resources to care for these babies as they grow and have other needs. Our program looks at a baby as a whole person and creates a plan that’s best for the baby’s full range of needs.”

Even babies who take part in the liquid ventilation trials will need the ongoing support of the NeoCLD Program. “But it will get them on the right path to recovery sooner,” Zhang says.

The power of the cells’ batteries

A mere 30 years ago, a remarkable discovery was made: Mutations in the DNA inside mitochondria — the energy-making batteries within cells — could cause disease. World-renowned CHOP researcher Douglas Wallace, PhD, made that first-ever diagnosis. Since then, the young field of mitochondrial medicine has been making astonishingly fast advances, and CHOP’s Mitochondrial Medicine program is leading the way.

“In 2007, there were about 70 mitochondrial disease genes identified,” says Marni Falk, MD, Executive Director of the program. “Now, mutations in approximately 300 genes are known.” 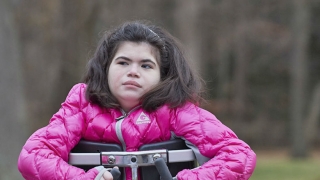 Juliet, mitochondrial patient Juliet, 13, has one of those gene disorders. As a baby, she was diagnosed with an unknown form of mitochondrial disease. After years of tests and research, CHOP identified the gene mutations that were the precise cause of her multi-organ disease. While Juliet was the first patient in the world diagnosed with that genetic mutation, physicians have since diagnosed more than 80 other patients worldwide.

Depending on which cells have low-functioning mitochondria, patients can develop a wide range of health problems, including fatigue, weakness, developmental disabilities, seizures, vision or hearing loss, feeding difficulties, and serious problems with heart, liver or kidney function. Before energy failure was definitively linked to disease, it was challenging to connect hard-to-measure symptoms such as chronic fatigue, headaches and gastrointestinal problems. “Nobody really understood why the person was sick,” explains Falk. “Often, symptoms would be dismissed as psychiatric or blamed on the person or family.”

While a cure remains elusive, “We are much more often able to make a specific diagnosis, counsel someone who may be at risk for developing X, Y and Z complications, and offer standard-of-care monitoring and therapies,” says Falk.

With Frontier Program support, Mitochondrial Medicine at CHOP has expanded in size and ambition. Over a few months’ time, the program grew from 200 to 800 patients, who come from all over the world. The addition of new staff members has dramatically decreased wait times for appointments. The program is creating the first-of-its-kind position of a mitochondrial dietician — because “we think optimizing nutrition in each patient will be a big part of treatment,” says Falk — and building a precision medicine clinical trial infrastructure to test new therapies.

As a result, more families can gain a fuller picture of their children’s conditions. “Knowing the specific gene mutation made a huge difference to us,” says Juliet’s mother, Janice. “Now we can start from somewhere and look for effective treatments.”

When only 4 days old, Steven had surgery at CHOP for multiple heart defects diagnosed while he was still in the womb. Then it was discovered that his heart wasn’t the only thing that needed fixing: He developed breathing difficulties and was found to have vocal cord paralysis and scarring in his airway. Ian N. Jacobs, MD, Medical Director of the Center for Pediatric Airway Disorders, performed a tracheostomy, in which a tube is inserted through a surgically created hole in the windpipe to create an alternate airway. It was the first of several surgeries Jacobs would perform on Steven, including two airway reconstructions using small pieces of Steven's rib cartilage.

It’s a procedure that Jacobs and his team perform often — and one they are intent on improving. They’re pursuing a much better alternative to rib cartilage: customized, bioengineered material designed to fit the specific size and rigidity of the patient’s airway. Although it sounds futuristic, “We’re currently working on an animal model of such an engineered graft,” Jacobs says. “When it can be translated to children, it would be derived from the patient’s ear cartilage cells, which would be used to grow cartilage in the laboratory.”

With Frontier Program support, “We’re building a new bio-engineering/bio-materials lab and recruiting a top-notch scientist to do translational research,” explains Jacobs. “Other surgical areas, like plastic surgery, urology and orthopaedics, could benefit as well from such research.”

The center treats a wide range of conditions, the most common being problems like Steven’s airway scarring. “But we see a lot of rare disorders, like missing the back portion of the larynx,” says Jacobs, “and there are few centers in the country that can treat these.” 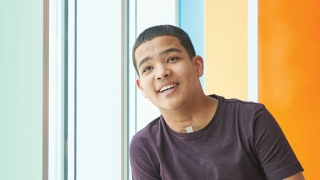 Steven, tracheostomy patient Steven’s many surgeries required him to have the tracheostomy tube in his neck for years. Finally, when he was 10, it was removed, and Steven, now a sixth-grader, has as much energy as his classmates. “Removing the trach was such a big step for him because it affected his body image, his self-esteem,” says his mother, Vanessa. “Getting the trach out allowed all of that to flourish.”

It was the kind of meaningful breakthrough that countless more children will experience, thanks to the Frontier Programs.