A unique womb-like environment designed by pediatric researchers could transform care for extremely premature babies, by mimicking the prenatal fluid-filled environment to give the tiniest newborns a precious few weeks to develop their lungs and other organs.

“Our system could prevent the severe morbidity suffered by extremely premature infants by potentially offering a medical technology that does not currently exist,” said study leader Alan W. Flake, MD, a Fetal Surgeon and Director of the Center for Fetal Research in the Center for Fetal Diagnosis and Treatment at Children’s Hospital of Philadelphia (CHOP).

Flake and colleagues report on preclinical studies of their extra-uterine support device today in Nature Communications. They tested and monitored effects on fetal lambs, in which prenatal lung development is very similar to that occurring in humans.

The innovative system uses a unique fluid-filled container attached to custom-designed machines that provide physiologic support. The fetal lambs grow in a temperature-controlled, near-sterile environment, breathing amniotic fluid as they normally do in the womb, their hearts pumping blood through their umbilical cord into a gas exchange machine outside the bag. Electronic monitors measure vital signs, blood flow and other crucial functions.

Of the one in 10 U.S. births that are premature (younger than 37 weeks gestational age), about 30,000 per year are critically preterm — younger than 26 weeks. Extreme prematurity is the nation’s leading cause of infant mortality and morbidity, accounting for one-third of all infant deaths and one-half of all cases of cerebral palsy attributed to prematurity.

Seeking Breakthroughs for the Tiniest Patients 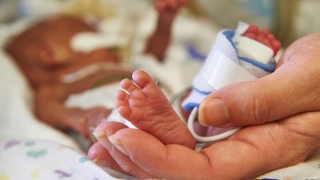 We’ve reimagined how to improve outcomes for babies born too early.

Neonatal care practices have improved overall survival of premature infants and have pushed the limits of viability to 22 to 23 weeks of gestation. At that age an infant weighs below 600 grams — little more than a pound — and has a 30 to 50 percent chance of survival. But this survival comes at a high price in quality of life, with a 90 percent risk of morbidity, from chronic lung disease or other complications of organ immaturity. Survivors face lifelong disability.

“These infants have an urgent need for a bridge between the mother’s womb and the outside world,” said Flake. “If we can develop an extra-uterine system to support growth and organ maturation for only a few weeks, we can dramatically improve outcomes for extremely premature babies.” The goal is to support infants from 23 weeks to 28 weeks gestational age; at 28 weeks they cross the threshold away from the most severe outcomes.

In the current study, the researchers describe the evolution of their system over three years, through a series of four prototypes, beginning with a glass incubator tank, and progressing to the current device. The eight preterm lambs tested in the most recent prototype were physiologically equivalent to a 23- or 24-week-gestation human infant.

The current system mimics life in the uterus as closely as possible, building on knowledge from previous neonatal research. There is no external pump to drive circulation, because even gentle artificial pressure can fatally overload an underdeveloped heart, and there is no ventilator, because the immature lungs are not yet ready to do their work of breathing in atmospheric oxygen. Instead, the baby’s heart pumps blood via the umbilical cord into the system’s low-resistance external oxygenator that substitutes for the mother’s placenta in exchanging oxygen and carbon dioxide.

In addition, amniotic fluid, produced in the laboratory, flows into and out of the bag. “Fetal lungs are designed to function in fluid, and we simulate that environment here, allowing the lungs and other organs to develop, while supplying nutrients and growth factors,” said Fetal Physiologist Marcus G. Davey, PhD, who designed and redesigned the system’s inflow and outflow apparatus.

The sealed, sterile environment inside the system is insulated from variations in temperature, pressure and light, and particularly from hazardous infections.

Previous researchers have investigated versions of an artificial placenta in animal models, but pumpless systems have achieved a maximum duration of 60 hours, and the animals have sustained brain damage. The new system, in contrast, has operated up to 670 hours (28 days) with some animals, which remained healthy. The lambs showed normal breathing and swallowing, opened their eyes, grew wool, became more active, and had normal growth, neurological function and organ maturation.

The program team brings together a broad range of experts at CHOP, including neonatologists, fetal medicine specialists, respiratory therapists, perfusionists and others. The initial impetus for the program came from CHOP Research Fellow Emily Partridge, MD, PhD, who experienced the challenges of caring for critically premature infants. “Those infants really struck a chord with me,” she said. She researched existing scientific literature, and five years ago proposed to Flake the pilot project that became the current device.

The researchers will continue to evaluate and refine the system, and will need to downsize it for human infants, who are one-third the size of the infant lambs used in the current study.

If their animal results translate into clinical care, Flake envisions that a decade from now, extremely premature infants would continue to develop in chambers filled with amniotic fluid, rather than lying in incubators, attached to ventilators. Added to the desired health benefits, there could be a large economic impact as well, reducing the estimated $43 billion annual medical costs of prematurity in the U.S.

Flake stresses that the team does not aim to extend viability to an earlier period than the current mark of 23 weeks. Before that point, limitations of physical size and physiologic functioning would impose unacceptably high risks. However, he added, “This system is potentially far superior to what hospitals can currently do for a 23-week-old baby born at the cusp of viability. This could establish a new standard of care for this subset of extremely premature infants.”

Watch the video to learn more about this study and hear from the research team.