Vesicoureteral reflux (VUR) remains a hot topic in the world of pediatric urology — and in pediatrics in general — as it is so intimately related to urinary tract infections (UTIs). The primary controversy is most often about the diagnosis of VUR — and whether or not to obtain a voiding cystourethrogram (VCUG) in response to antenatal and postnatal urinary tract dilation (UTD) or a UTI. However, it is important to consider that reflux comes in many shapes and sizes that go beyond the presence and grade of VUR. Management after diagnosis is often the most challenging question.

The evaluation of VUR must include:

To determine optimal management of VUR for each patient, the constellation of the above factors needs to be evaluated, as these brief cases demonstrate. 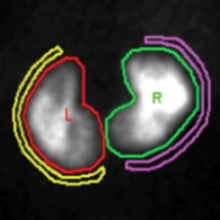 Image 3: Case 1—DMSA showing scarring in bilateral moieties of horseshoe kidney. A 14-month-old girl presented with a history of 2 recent febrile UTIs, at 11 months and 3 months later, when she presented to urology. We started her on antibiotic prophylaxis, and a VCUG demonstrated R grade 3 VUR and L grade 2. Despite antibiotics, she developed another febrile UTI at 18 months, and just after completing treatment, she had another febrile illness. In response, a DMSA renal scan was obtained, which showed bilateral scarring. No evidence of BBD. At 19 months, she underwent bilateral robotic assisted laparoscopic ureteral reimplantation. Since then, she has been infection-free, is now potty trained and doing well. 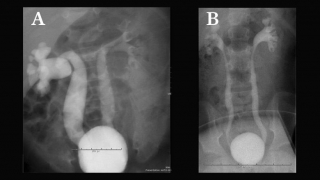 Image 4: Case 2—(a) Initial VCUG as infant to diagnose VUR; (b) VCUG at 10 years old, with re-presentation after pyelonephritis A 10-year-old girl returned to clinic after 6-year absence. Following a febrile UTI at 2 months old, she was diagnosed with R grade 3 and L grade 2 VUR (see Image 4a), and started on antibiotic prophylaxis. At 1 year of age, a repeat VCUG showed persistent reflux, but no dilation on RBUS. After toilet training, a DMSA demonstrated equal function with no scarring, so prophylaxis was stopped. She was not seen in urology until she had an episode of pyelonephritis at 9 years old (see Image 4b). In retrospect, family admitted she may have had multiple self-resolving UTIs in the interim. Repeat DMSA showed right renal scarring with only 28% function and left 72% function. She was restarted on Bactrim prophylaxis, and due to a history of dysfunctional voiding and constipation, she was started on MiraLAX and began biofeedback to optimize her voiding dynamics. After 1 year, prophylaxis was stopped and she has not had any further UTIs.

A 6-week-old girl presents with a febrile illness. A catheterized urine sample grows >100K E. coli. A RBUS appears normal. Because she is under 2 months of age, a VCUG is performed that demonstrates L grade 2 and R grade 1 VUR late in filling on the left, and during voiding on the right. She is placed on antibiotic prophylaxis. She is seen back with an RBUS at 6 months, then 1 year. RBUS remains normal, with progressive renal growth. Continuing on antibiotic prophylaxis, she goes through toilet training, is encouraged to drink water, voids on a regular basis (avoid the potty dance!), and remains constipation-free. At age 3 antibiotics are discontinued, and at 3.5 years a repeat RBUS still shows no urinary tract dilation with adequate renal growth.

These cases demonstrate that the diagnosis of VUR is only the first step. In general, if babies are diagnosed with VUR after a febrile illness, we aim to allow them time to grow out of the reflux with continuous antibiotic prophylaxis. Addressing BBD may be sufficient to render patients infection-free. If they can achieve toilet training without further UTIs, they come off antibiotics and we see how they respond.

However, if breakthrough infections persist, sometimes surgery is necessary, but even this must be followed with diligent maintenance of routine voiding and bowel habits to prevent recurrent cystitis. Even in the absence of infections, if the reflux is severe, causing dilation of the upper tracts seen on RBUS and persisting past age 2, we may have a lower threshold for surgical repair since girls especially may be at risk of significant UTIs later in life.

Like so many things in medicine, VUR is a dynamic diagnosis that must be managed on a case-by-case basis to determine the best care for each individual patient.

Contributed by: Dana A. Weiss, MD