A 7-year-old boy was diagnosed with obstructive sleep apnea syndrome (OSAS) on a polysomnogram (PSG) obtained because he snored every night, with occasional gasping. He did well in school, got along with friends and was not sleepy during the day. He was full-term, had occasional rhinitis, and took no medications. Family history was unremarkable. His weight, height, and BMI were at the 50th percentiles for age.

He had a slightly adenoidal facies, normal jaw that was not retrognathic, patent nares, and mild edema of the nasal mucosa. Oropharynx showed symmetric tonsils protruding beyond the anterior pillars (3+), and normal palate and dentition (Figure 3a). 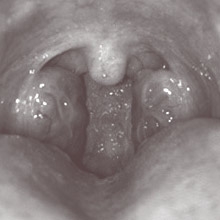 Chest, lung, and heart exams were normal. There was no cyanosis, clubbing, or edema. Muscle strength and development were normal. PSG revealed OSA with an obstructive apnea hypopnea index (AHI) of 9.3/hour, arousal index 11.2/hour, peak end-tidal CO2 54 mmHg, SpO2 nadir 87%; and normal sleep efficiency and stages. A tracing from his overnight polysomnogram is shown in Figure 3b. His parents were reluctant to have surgery; therefore he was referred to the Sleep Center at The Children’s Hospital of Philadelphia to discuss treatment options. 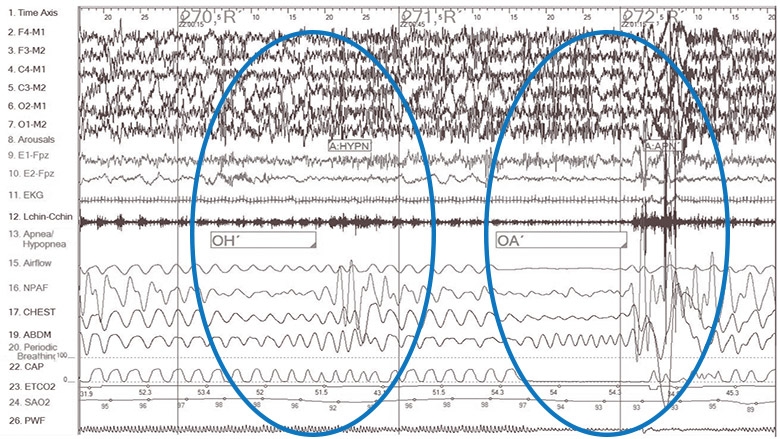 Most children with uncomplicated OSAS, including obese children, show a marked improvement in the number and severity of obstructive events on PSG following adenotonsillectomy. Early treatment with adenotonsillectomy is the usual first-line treatment recommended by the American Academy of Pediatrics (AAP). While adenotonsillectomy is a safe and common procedure in otherwise healthy children, some families prefer alternatives to surgery. The truth is, there are no universally accepted guidelines as to when to treat OSAS in children. The decision to treat should be individualized and not predicated solely by the obstructive AHI. Clinical features, such as daytime function, medical risk factors, and severity of PSG abnormalities (including desaturation, CO2 retention, and arousals, in addition to the AHI) should help drive the decision.

Recently, a large, multicenter, randomized controlled trial was undertaken to determine whether adenotonsillectomy would, in fact, result in improved clinical outcomes. The Childhood Adenotonsillectomy Trial or CHAT study evaluated early adenotonsillectomy vs. “watchful waiting” with supportive care for childhood OSAS. This study showed that early surgery resulted in improved behavior and quality of life as well as normalization of the PSG in the surgical group (79%) compared to those in the watchful waiting group (46%) at 6 months. This study failed to show an association between OSAS and cognitive outcomes over 6 months; however, children assigned to adenotonsillectomy showed greater improvements in behavior, daytime sleepiness, and sleep symptoms and larger improvements on the Connor’s Rating Scale (measuring restlessness, impulsivity, and emotional lability) compared to the watchful waiting group. These findings support the AAP clinical practice guidelines that adenotonsillectomy is the recommended first-line treatment for uncomplicated pediatric OSAS.

The CHAT study also found normalization of PSG findings in 46% of children in the watchful waiting group. The reasons for spontaneous resolution are unclear, but may include growth of the airway or regression of lymphoid tissue over the 6 months. Therefore, watchful waiting with supportive care and close follow-up to detect possible worsening of the OSAS and its associated problems has become an acceptable approach in appropriate patients.

Considering that childhood OSAS may be associated with neurocognitive impairment, behavioral problems, failure to thrive, hypertension, cardiac dysfunction, and systemic inflammation, deciding whether watchful waiting is appropriate can be challenging. The child should be free of daytime symptoms, and the child’s polysomnogram should not show severe abnormalities. Because the CHAT study was limited to 5- to 9-year-olds with mild-moderate OSAS without severe oxygen desaturations, the watchful waiting approach should not be applied to patients younger than 5 years, those with more severe symptoms or findings, or children with high-risk medical conditions.

Nasal CPAP is effective to treat OSAS, but clinicians need to include family education to improve adherence and schedule frequent CPAP titrations.

During the watchful waiting period, interventions may be promoted, including orthodontic procedures, weight loss, and controlling environmental factors such as allergens, tobacco smoke, and other pollutants. Treatment with intranasal corticosteroids or montelukast could be considered; however, effects on OSAS require further research and long-term side effects must be considered.

To refer a patient to the Sleep Center at The Children’s Hospital of Philadelphia, call 215-590-3749. Patients can be evaluated at the Main Building, CHOP Care Network Specialty Care & Surgery Center King of Prussia, and CHOP at Virtua Specialty Care Center in Voorhees, New Jersey. View more information on the Sleep Center’s services.