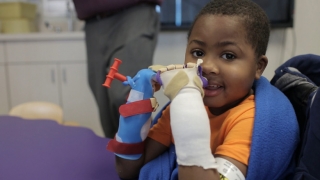 Precocious 8-year-old Zion Harvey, the world’s first child to receive a bilateral hand transplant earlier this summer, and charismatic little boy who captured the hearts of millions around the world, was discharged from The Children's Hospital of Philadelphia (CHOP) earlier today. Earlier this summer, surgeons at CHOP joined with colleagues from Penn Medicine and Shriners Hospitals for Children - Philadelphia to complete this landmark surgery and at a press conference on July 28, Zion, his family, and his medical team were introduced to the world. Read Zion’s full story.

Following surgery, Zion spent a week in CHOP’s Pediatric Intensive Care Unit, then was moved to a medical unit and eventually moved to an inpatient rehabilitation unit where he has been receiving physical and occupational therapy several times per day, an essential step to gaining improvement in hand function.

“We are so proud of Zion,” said lead surgeon, L. Scott Levin, MD, FACS. “Almost immediately after surgery, Zion displayed his resilience and positive attitude as he adjusted to the incredible experience of having new hands. In daily sessions with CHOP physical and occupational therapists, he has worked hard, slowly gaining movement and strength in each hand, learning to pick up and hold objects.”

Levin, who is the director of the Hand Transplantation Program at The Children’s Hospital of Philadelphia, chairman of the Department of Orthopaedic Surgery at Penn Medicine, and professor of Surgery (Division of Plastic Surgery) at the Perelman School of Medicine at The University of Pennsylvania, led the 40-member multidisciplinary team who performed the operation.

Zion will continue to receive therapy on an outpatient basis.  The treatments may last as long as two years and are aimed at enabling Zion’s full use of his transplanted hands. Dr. Levin and his team will continue to follow Zion monthly initially, then annually throughout his lifetime. Doctors are very optimistic about his progress so far as well as his long-term potential.

“The challenges facing Zion are new, but his determination should overcome them. He’s already done so many amazing things,” said Zion’s mother Pattie Ray. “This is just one more hurdle he’s ready to jump.”