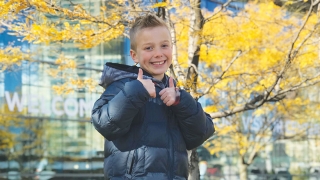 Patient is active and doing well on medication. Case: A 5-year-old boy presents for an annual well visit. His parents report he has recently had an increased appetite along with increased energy levels and that he constantly complains about being warm with occasional complaints that his heart is “beating fast.” He is otherwise happy and interactive with his siblings and friends, but has had increased moodiness and some behavioral outbursts. With the exception of mild, intermittent asthma, his past medical history is unremarkable, including his birth history. Family history is positive for multiple members having autoimmune disorders.

On exam, he is flushed and his eyes are somewhat prominent. His heart rate is elevated at 130 beats per minute, and his skin is warm and sweaty. His neck is full, but you do not see an obvious outline to his thyroid and there are no abnormal lymph nodes. He is breathing comfortably with clear breath sounds bilaterally. His abdominal exam is normal, no hepatosplenomegaly or masses.

Discussion: Experts at the Pediatric Thyroid Center at Children’s Hospital of Philadelphia diagnosed him with hyperthyroidism, a condition that accounts for 15% of pediatric thyroid disorders. The most common etiology of hyperthyroidism across all age groups is autoimmune hyperthyroidism, known by the eponym of Graves disease (GD) attributed to the early clinical description by Sir Robert Graves. GD is more common in females, with a peak incidence in puberty; however, over the last decade, there is an increased incidence of autoimmune thyroid disease in pre-pubertal patients, including patients <5 years.

The clinical presentation of hyperthyroidism is somewhat dependent on the age of the patient, and there is often a delay in diagnosis secondary to the indolent but progressive onset of signs and symptoms and the significant crossover with common behavioral disorders, including temper tantrums/moodiness, anxiety, and attention deficit/ hyperactivity disorders. Additional common symptoms include heat intolerance, fatigue, increased appetite but with weight loss, increased urination +/- enuresis, and increased frequency of bowel movements. Mild growth acceleration may occur in younger patients with delayed pubertal progression and amenorrhea or lighter menses in peripubertal/pubertal girls. Common physical exam findings include an increased resting heart rate (typically >100 beats per minute), restlessness/ fidgetiness, fine tremor (most noticeable in the hands with straight arm extension), and proximal muscle weakness (inability to maintain a single, straight leg raise against gravity in a prone position).

The thyroid is typically enlarged (goitrous), readily noticed with neck extension +/- swallowing, and a bruit may be auscultated. Approximately 30% of pediatric patients will have unilateral or bilateral noninflammatory, proptosis (bulging eyes +/- mild scleral injection but without chemosis, periorbital edema, or evidence of orbital congestion).

The diagnosis of GD is confirmed by 2 tests: a suppressed thyroid-stimulating hormone (TSH) (<0.5 mIU/L) and elevated thyroid-stimulating immunoglobulin (TSI). Additional laboratory testing should include a T3 (total T3) and a T4 (free T4 or total T4) level (both elevated), as well as baseline complete blood count (CBC) and liver function testing (CMP). Because GD is in the spectrum of autoimmune thyroiditis, both anti-thyroglobulin and anti-thyroid peroxidase are identified in more than 50% of patients. Radiological imaging, either thyroid ultrasound or a radioiodine uptake and scan, should be considered if the TSI is not elevated in an attempt to identify an alternative diagnosis, including an autonomously functioning thyroid nodule (a “warm” or “hot” nodule), hashitoxicosis (a transient phase of dysregulated release of thyroid hormone typically followed by conversion to hypothyroidism), or others (see Table #4 in reference 1).

The treatment of GD centers on blocking thyroid hormone production and waiting to see if TSI normalizes. The only medication approved for use in the United States is the thionamide methimazole (MMI). A simple approach to decide the initial dose is to administer 1 mg per age in years of the patient; ie, 5 mg for a 5-year-old. Repeat labs should be obtained (TSH, T3 and T4) monthly with adjustment in MMI dose based on response to therapy. Once the T3 and T4 normalize, the TSH will start to increase, a sign that the MMI dose can be decreased.

Atenolol or another a-specific beta-blocker may be used initially to help control the tachycardia and associated symptoms. This can be stopped once T3 and T4 are in normal range. MMI should never be stopped until the TSI is in the normal range. Approximately 25% to 30% of patients may experience MMI-associated pruritis +/- urticaria and/or joint pain. Temporary lowering of the MMI with co-administration of a nonsedating antihistamine and a NSAID can help extinguish these side effects. The most common adverse reaction is MMI-induced neutropenia. This occurs in <1% of patients and is heralded by fever, pharyngitis, and oral ulcers. Therefore, MMI should be held pending CBC results for patients who present with these signs and symptoms.

Approximately 20% of children and adolescents diagnosed with GD will achieve remission from disease within 5 years of diagnosis. If the course of disease is unpredictable and negatively impacting daily activities, or the patient has not achieved remission within 5 years, definitive therapy to convert GD to permanent hypothyroidism should be pursued. The 2 options for definitive therapy are either thyroidectomy or radioiodine ablation. Both are equally effective, with the risk of complications based on appropriate patient selection and the experience of the treatment facility. The CHOP Pediatric Thyroid Center, the busiest pediatric thyroid center in North America and internationally, recently published a review of 464 patients undergoing thyroid surgery between 2010 and 2017, including 127 patients undergoing thyroidectomy for GD, with an overall permanent complication rate of <1%.

Patient update: It has been 4 years since this patient’s diagnosis. He has had occasional flares in signs and symptoms of hyperthyroidism. However, in general, there are many more good days than bad, and he is thriving and keeping up with peers. While it has not been an easy course, based on his age, resolved thyroid eye disease, and decreased frequency of lab testing, his parents are still interested in waiting to see if he achieves remission.