How sharp are your diagnostic skills? Correctly name the diagnosis for the case below to earn a chance to receive a swag bag from Children’s Hospital of Philadelphia. A winner was randomly selected on May 6 from those who submitted the correct answer. 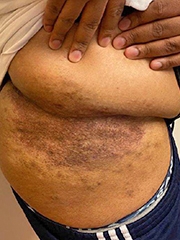 A 28-year-old male was seen in our Comprehensive Vascular Anomalies Program clinic with a history of a congenital birth mark over his right lateral side, gluteal area and upper thigh. He was sent for multidisciplinary evaluation because of episodes of severe pain and cellulitis over the birthmark. These episodes were increasing in frequency and occurring every 4 months. Clinical symptoms included fever, chills, pain, erythema, and firmness over the birthmark. Occasionally he experienced hyperhidrosis, bleeding, and drainage at the site of the birthmark. Symptoms improved with antibiotics and required hospitalization for sepsis on one occasion.

He has been seen at several institutions since birth. His mother reported to him that the lesion was present at birth and “grew with him.” Initially, his mother was told that it was a “birth mark” that would go away and was then told the lesion was a “port wine stain.” A small bunch biopsy was done when he was 13 that revealed a capillary malformation.

The patient reported the lesion getting fuller and thicker over time.

What is the most likely diagnosis?

This was a vascular lesion that was present at birth with some change over time and with morbidities including, pain, infection, bleeding and firmness. Vascular anomalies are divided into tumors and malformations. Tumors are proliferative and rarely present at birth. Malformations are congenital in nature and can worsen over time — not necessarily from cellular proliferation, but from changes in the immature vasculature. The vessel of origin appeared to be a capillary, but the reports of fullness and changes with time made us question a deeper component to this lesion.

Our differential diagnosis consisted of a non-involuting congenital hemangioma (NICH), a capillary lymphatico/venous malformation (CLVM) or a capillary malformation. A capillary malformation will fade or can become darker and fuller over time. but is not usually associated with cellulitis and the other symptoms. The lesion appears too circular and defined to be a CLVM, but imaging was needed to assess deeper involvement.

Congenital hemangiomas (CH) arise in utero and are fully formed at birth. They do not have accelerated proliferation as infantile hemangiomas that are not present at birth. There are three subgroups of CH, rapidly involuting CH (RICH), non-involuting CH (NICH) and partially involuting CH (PICH). RICH regress after birth and resolve at 15 to 16 months of age. They can be associated with transient hypofibrinogenemia and thrombocytopenia. NICH do not involute and grow with the individual, but there have been reports of an increase in the size of these lesions and morbidities, including pain and infection. PICH initially regress and then remain as a NICH.

Thus far there is no medical treatment for these lesions. If needed, interventional or surgical treatment is considered. Recently, GNAQ and GNA11 somatic mutations have been identified, which may be helpful to help guide us in directed therapeutic options.

Our patient had an MRI that revealed a skin and subcutaneous lesion characterized by diffuse thickening over the involved lesion and dilated draining veins. There was early venous filling consistent with arteriovenous fistulae. Findings were consistent with a non-involuting congenital hemangioma (NICH). Lack of surrounding soft tissue inflammatory change/underlying soft tissue mass made Kaposiform hemangioendothelioma/tufted angioma less likely. Pathology was reviewed and thought to be more consistent with a NICH though the specimen was small. Repeat biopsy is schedule to assess for somatic mutations. There are no present treatment options. He was put on prophylactic antibiotics and has not had another episode of cellulitis. Newer agents are on the horizon as possible treatment options as surgical intervention is not a possibility because of extent of the lesion.

At CHOP, patients with complex hemangiomas and other vascular anomalies are treated in the Comprehensive Vascular Anomalies Program (CVAP). It includes state-of-the-art genomics and personalized research strategies to determine the causes of these conditions and identify targeted therapies. These innovative options are based on standards of excellent interdisciplinary clinical care.

The CVAP team brings together experts from Children’s Hospital’s Dermatology Section, Plastic Surgery, Oculoplastic Surgery, Hematology, Oncology, Cardiology, Interventional Radiology and others as needed. To consult with a specialist or refer a patient, please call us at 1-800-TRY-CHOP, then press 2. 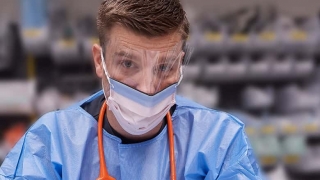 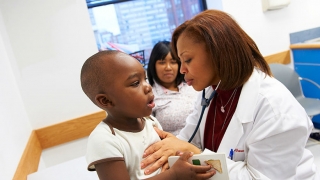 Find tools to help refer a patient to Children’s Hospital of Philadelphia.