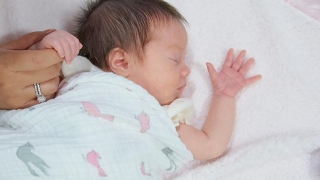 Premature babies are often born with underdeveloped lungs and therefore are at greater risk for infant chronic lung disease, which is also called bronchopulmonary dysplasia (BPD).

Even after these babies’ lungs have matured to where they can leave the NICU and go home, they still require attentive follow-up care. As their lungs continue to grow and heal, they are especially vulnerable for the first two to three years of life.

Studies indicate that 40% of babies with infant chronic lung disease continue to show symptoms of lung disease in childhood. Sometimes these children will have wheezing and coughing with respiratory viruses and shortness of breath with exercise. Up to 25% of these children have symptoms into adulthood.

That is why CHOP launched the Post-preemie Lung Disease Clinic as a central place to follow premature infants as they become toddlers and beyond. The goal is to keep these children on a trajectory that will maximize their lung function and health while minimizing comorbidities.

Any child who had chronic lung disease as a premature infant and who still has intermittent or chronic respiratory problems is a candidate for this specialized care.

Some follow-up visits may be conducted via telehealth, if appropriate.

The clinic is staffed by pediatric pulmonologist Sharon McGrath-Marrow, MD, MBA, who has 28 years of experience caring for post-preemie children with lung disease, a nurse practitioner, respiratory therapist and a registered dietitian.

Each child’s path to optimum lung function is different, and the current state of their lung disease and treatments will determine how frequently they should visit the Post-preemie Lung Disease Clinic.

Clinicians in the clinic understand the value of working closely with families as their children move toward achieving the best outcomes. Parents and guardians are integral to treatment as they observe symptoms, monitor use of supplemental oxygen and deliver medication.

The clinic team will equip the family to confidently care for their child as the child moves through the stages of lung development.

Physicians will work with families to set up a weaning schedule that works in the home for children on supplemental oxygen. This will allow children to gradually become less dependent on oxygen and better able to engage in typical childhood activities.