It’s one thing for a kid to be a football fan. It’s a whole other ballgame when an NFL star is a huge fan of a kid — on and off the gridiron.

That's the case with 9-year-old Amirah, a patient at Children's Hospital of Philadelphia (CHOP), and Saquon Barkley, a running back for the New York Giants who was named the NFL's offensive 2018 Rookie of the Year. 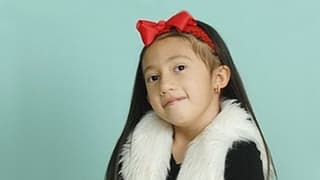 Barkley is Amirah's uncle. He displayed his love for his niece publicly by wearing custom designed shoes for #MyCauseMyCleats day in December 2018. Barkley's shoes included “22QAwareness” and “RIP Dr. Robert Campbell” to spotlight Amirah’s relatively unknown genetic condition — chromosome 22q11.2 deletion syndrome — and the late CHOP physician who played a large role in her complex care over many years.

The cleats also included a picture of Barkley and Amirah, who celebrated her birthday a few days before Barkley's big game against the Chicago Bears.

“22q is a disorder that my niece was diagnosed with when she was very young," says Barkley. "I am representing 22q to give back to my niece and let her know that I am always thinking about her, that I love her and care about her so much.”

Over the past five years, Amirah has made amazing progress despite the physical, emotional and developmental challenges of living with 22q11.2 deletion syndrome, thanks in huge part to CHOP’s internationally recognized 22q and You Center. The center is the leader in the diagnosis and treatment of children with chromosome 22q11.2 deletion syndrome, which is caused by a small missing piece of the 22nd chromosome, at times affecting every system in the body.

22q11.2 deletion syndrome is the most common cause of DiGeorge syndrome, which includes problems with the heart and glands in the chest resulting in immunodeficiency (problems fighting infection) and low calcium. Before the chromosome difference was identified at CHOP, there were several other clinical names for the condition including velocardiofacial syndrome, conotruncal anomaly face syndrome, Cayler cardiofacial syndrome, and Opitz G/BBB syndrome (in a subset of patients).

Early signs of a problem

Amirah was 5 years old when she was officially diagnosed with 22q11.2 deletion syndrome, a chromosomal disorder involving a small, missing piece of DNA on the long arm of chromosome 22, resulting in the loss of about 50 genes. But there were signs that something was affecting her health soon after her birth.

For example, Amirah turned blue while eating the day after she was born. At the time, she was diagnosed with an elevated diaphragm.

When Amirah was 6 months old, her mom, Katrina, became concerned when Amirah wasn't using her left arm to play with or reach for toys, and couldn’t sit on her own. Katrina took her to CHOP where and MRI revealed the baby's brain had not developed correctly. Amirah began early intervention including physical therapy. By 10 months old, she was sitting up on her own. Amirah continued early intervention services for the next few years and received physical, speech and occupational therapy at home.

Amirah was a toddler when her family noticed her spine appeared curved. Initially, pediatricians reassured Katrina that Amirah would likely grow out of the scoliosis. But because of Amirah's other issues, Katrina wanted to double check, so she scheduled an appointment with an orthopaedic specialist, Robert Campbell, MD, then-Director of the Center for Thoracic Insufficiency Syndrome. Dr. Campbell recommended that Amirah wear a brace to slow down the progression of her curve and keep it from getting worse. For a time, the brace worked.

In addition to her curved spine, Amirah was also experiencing shortness of breath and asthma-like symptoms. She was being treated by a pulmonologist at CHOP.

Learn more about 22q11.2 deletion and how it's treated at CHOP.

22q11.2 deletion syndrome is associated with developmental delays, including growth and speech, as well as learning differences, autism and ADHD in a subset of patients. Children like Amirah can be diagnosed with any combination of an array of health problems across multiple systems. For Amirah, it appeared her genetic condition had also caused thoracic insufficiency syndrome, a spine and chest wall disorder that limits growth and can have life-threatening consequences because the spinal curve affects lung growth.

Scoliosis is one of the most challenging conditions still affecting Amirah, her mom says. Every six months, Amirah undergoes surgery to extend, replace or repair the vertical expandable prosthetic titanium rods (VEPTR) that were first implanted in her back by Dr. Campbell when she was 3 years old. The rods helped to straighten her spine, but because she continues to grow, the rods need to be expanded or replaced to keep pace with her growth.

Amirah also had pharyngeal flap surgery when she was 5 years old to repair a difference in her palate. The surgery alleviated Katrina’s worries that Amirah’s classmates and teachers wouldn’t be able to understand her when she spoke. “It was one of the best decisions we made,” says Katrina. “Her speech improved so much in a short amount of time. She was able to communicate independently and have conversations with her peers.”

Prior to surgery, Amirah’s therapist felt her speech had reached a standstill, despite intensive therapy. “We saw two different ENT doctors in our area and both said Amirah was fine just by doing a hearing test. Her speech therapist still wasn’t happy and suggested we ask for a referral to go to CHOP,” recalls Katrina.

Though Dr. Campbell was the first to suspect Amirah's condition may have a genetic component, it was otolaryngologist Ken Kazahaya, MD, MBA, FACS, who found the first evidence to support that theory.

While performing an endoscopy of Amirah's nasal passages and esophagus, he discovered a problem with her palate and referred the family to the genetics team at CHOP. Amirah was seen by Elaine H. Zackai, MD, Director of Clinical Genetics at CHOP. Dr. Zackai confirmed that Amirah had 22q11.2 deletion syndrome and referred the family to CHOP's 22q and You Center for follow-up and care coordination.

A special day for a happy kid 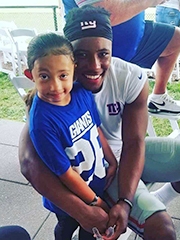 Today, Amirah is thriving. She's an active kid who enjoys playing baseball for the Giants, her special needs team in the Miracle League, and she loves to dance and sing. Though she was shy before her palate surgery — she frequently became frustrated when people couldn't understand her — now, she's outgoing.

“Whenever we go anywhere, she is the first on the dance floor and the last one to leave,” Katrina says. “She dances. She sings. She will put on a show.”

Amirah still get nervous before spine surgery every six months, but two or three days after the procedure, she's back to her happy, joyous self, her mom says. She now sees orthopaedic surgeon Patrick Cahill, MD, who took over after Dr. Campbell passed away.

“I feel like every day she does more and more than we ever expected of her,” Katrina says. “Every day is miraculous.”

Amirah and her mom truly appreciate the time they spend in the 22q and You Center, and are grateful to its staff, especially Director Donna M. McDonald-McGinn, MS, CGC, for shepherding Amirah and her family through their medical journey and facilitating Amirah's complex multidisciplinary appointments. There is no question the 22q and You Center is committed to ensuring that Amirah, and all the patients in the Center, receive the best possible care by any of the more than 20 subspecialties whose providers have become world experts in this condition. In fact, it is through the 22q and You Center that Amirah was evaluated by reconstructive surgeon Oksana A. Jackson, MD, who went on to surgically repair Amirah's palate, which markedly improved her speech — making a huge difference in her daily life.

“Most importantly, the center helps families navigate this complex condition and better cope with the hurdles that come along in infancy and across the individual’s lifespan.”

For her birthday, Amirah chose to have dinner out with her family at her favorite restaurant. The celebration continued when they all attended the Giants-Bears game that her uncle was playing in. It was Amirah’s first live professional football game, and watching her uncle playing for her was a gift she will never forget.

When the Giants beat the Bears in overtime, they were not the only winners that day: Amirah has the cleats to prove it.