Alex Volz is a playful boy whose bright blue eyes and energetic smile bring joy to everyone around him. In many ways, he is a typical toddler.

He adores the furry red Sesame Street character, Elmo. And he loves to sit with his mom, Marissa, while they read books and piece together puzzles.

But Alex and his family are extraordinary survivors. At just two and a half years old, Alex has persevered through more challenges than most of us face in a lifetime. 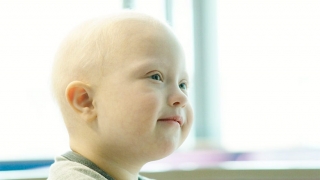 On April 21, 2005, Alex was born with both Down syndrome (trisomy 21) and a congenital heart defect. At just four hours old, he was rushed to The Children’s Hospital of Philadelphia for life-saving care. Marissa and her husband Rick were reassured by the excellence and compassion of the doctors and nurses who cared for Alex during those crucial nine days in the Newborn/Infant Intensive Care Unit.

Less than a year and a half later, the Volzs found themselves back at Children's Hospital. This time, little Alex needed cardiac surgery. Performed by Thomas Spray, MD, chief of the Division of Cardiothoracic Surgery, Alex's complicated surgery was a triumph.

After five days at CHOP, the Volzs were thrilled to return to a normal life at home. Now, managing the challenges of Alex’s Down syndrome seemed insignificant in comparison.

From ear infections to leukemia

The Volz's homecoming was short lived. Just one year after his heart surgery, Alex was getting stubborn ear infections that just wouldn’t go away. Before jumping to conclusions, Marissa did some research and discovered that children with Down syndrome are more apt to get leukemia.

Marissa immediately took Alex to the emergency room at Children’s Hospital, hoping to hear that Alex's ear infection was just that, an ear infection.

Instead, the doctors gave Marissa the news that she feared most. At only 27 months, Alex was diagnosed with acute lymphoblastic leukemia (ALL).

Distraught, Marissa couldn't bring herself to say “leukemia” at first, but the doctors and nurses at the Cancer Center at CHOP supported her and Rick by laying a foundation and describing a clear path for treatment.

"There was a plan, and they could fix him,” said Marissa. "I felt better knowing that."

The oncologists and nurses explained to Marissa that there are five phases to treating ALL. Although Alex is currently in remission — which means that his leukemia cells have been adequately reduced to allow for the return of healthy red and white blood cells and platelets — his journey is not over.

Right now, Alex is braving through the fourth and most intensive phase of treatment. When he’s not too nauseous from the chemotherapy, he nibbles on his favorite foods: Cheerios, ravioli and toast.

In order to completely beat the leukemia, Alex must continue his treatments up through the final and longest phase of therapy, called maintenance, which takes 2½ years for boys. In the maintenance phase, Alex will receive a repeated course of less intense chemotherapy to further reduce the number of leukemia cells.

Alex's prognosis is good. ALL has one of the highest cure rates. But it's a painful and scary battle for anyone to endure, let alone a toddler.

Even through his toughest chemotherapy treatments, Alex demonstrated strength and courage every day. It is not unusual to see him giggling and smiling. His contagious laughter even transfers to his doctors and nurses. And his bravery is an inspiration to us all at Children’s Hospital.

Because of the research being completed at The Children’s Hospital of Philadelphia, we have led the way to a cancer cure rate higher than 80 percent, making it possible to cure cancers like Alex's leukemia.

We will not stop until the world is cancer free for our children, so that kids like Alex can have the gift of childhood they deserve.