He’s 14½ inches tall, with soulful eyes and a cuddly H-shaped body. He’s a great listener, as well as a source of good advice. And he’s become an important member of the Cancer Center team at The Children’s Hospital of Philadelphia.

Meet Cellie. A unique stuffed toy, created to help children with cancer and their families better handle the multitude of stresses they face. The Cellie Cancer Coping Kit, which also includes cards printed with coping tips and a guide for parents, is part of an innovative new program at CHOP.

Despite his goofy appearance, everything about Cellie has been carefully considered. 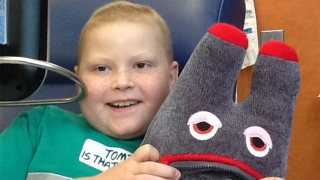 Ten-year-old Justin Stagner-Hertz found out he had acute lymphoblastic leukemia (ALL) in July 2010. During the course of his treatment at CHOP, he and his parents, Bill and Lisa, agreed to look at an early prototype of Cellie. They were participating in a research study to gather patients’ and families’ feedback to improve the Cellie Coping Kits.

“I gave them the idea to make a pocket so you could put notes in his mouth,” says Justin. Indeed, the final version of Cellie has a zippered mouth that can be used to hold the coping cards and other notes.

When Lisa saw Cellie for the first time, “I immediately thought, ‘What a great idea,’” she says. “It would be great for newly diagnosed families to help them learn how to cope. I could envision kids cuddling it during treatments. We had discovered some of the ideas on our own, but I knew it would be especially helpful for families early on.”

When Justin relapsed this spring, he was given a Cellie Coping Kit of his own. As a 10-year-old boy, he doesn’t cuddle Cellie much, but he and his family have found the coping kit to be helpful during this cycle of treatment.

“It invites conversation,” Lisa says. “At first, it was hard to even talk about the C-word. Now, we take Cellie out and look at the cards, and I try to engage Justin in talking about having cancer. Cellie helps him open up.

"Sometimes, we get silly," she says. "Laughter and humor are a big part of healing.”

For a recent treatment, Cellie made the trip with Justin from their home in Aston Township, PA, to CHOP. Justin wore an allergy alert bracelet, and so did Cellie. Cellie also comes along when Justin is admitted to the Hospital for four days every month for treatment.

Justin says he gained confidence to ask his doctors questions himself from one of the kit’s coping tips that encourages kids to write down questions they have for their doctor, so they don’t forget to ask them at the next appointment.

Tips for caregivers too

Bill and Lisa follow some of the more than 100 tips in the caregiver’s guide. For example, they remind Justin to use “belly breathing” during needle pokes and distract him with complex LEGO® sets that are brought out only during his hospitalizations.

“We’ve made a space shuttle and a ninja ship with moveable parts,” Bill says. “The kits have hundreds of pieces and keep him really occupied.”

Clinical psychologist and behavioral researcher Meghan Marsac, PhD, who came up with the Cellie idea, started with existing research and discussions with CHOP’s oncology team to develop the prototype.

“We wanted something engaging for the children to help them through this difficult time in their lives,” Marsac says. “It needed to be child friendly and family friendly. Families can use the Cellie Kit independently, but medical providers can include it in their care of the patient, too.”

After incorporating input from the first research study — the one the Stagner-Hertz family participated in — Marsac conducted a second study with a dozen families who were given a Cellie Coping Kit when their child was diagnosed. Overwhelmingly, children and parents liked the kit, felt the advice was trustworthy and helpful, and most importantly, they used it.

Sharing Cellie with others

This summer, the Cancer Center began providing coping kits to newly diagnosed patients ages 6 to 12 years. The Hospital’s Comprehensive Sickle Cell Center has adapted the kit for a study involving its patients, and other areas of CHOP are also considering rolling out their own versions. Marsac would like to make Cellie available to kids facing cancer at other hospitals, too.

“The Cellie kit was just one of so many things CHOP has done to make this experience easier on Justin and on us,” Lisa says. “The generosity and caring blows my mind.”