It was a Tuesday in November 2011 when 2½-year-old Hailey Tamagno started to limp. “She told me her leg hurt,” says Hailey’s mom, Missy.

“When I said something to my mom, she though it was a little weird that Hailey would have pain like that," Missy adds. "I thought it was just growing pains.” 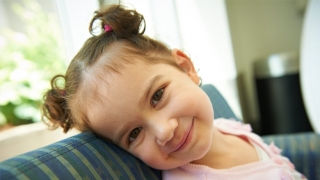 The pain seemed to have disappeared by the next day, but Hailey’s grandmother encouraged Missy to take the toddler to the doctor for blood work.

“Her pediatrician called me late Wednesday night, like 8:30 p.m., which was unusual,” says Missy. “He said the results were somewhat abnormal and said we should have more testing done the next day.”

Thursday morning was Hailey’s next round of tests, and by Thursday afternoon they had a diagnosis: leukemia.

“It was a blur. Our pediatrician told us to take her straight to Children’s Hospital of Philadelphia — there was someone at the hospital who was expecting us.”

Missy and her husband, Chris, were shocked and scared, but also incredibly lucky. When Hailey first saw the doctor on Wednesday, there had been no trace of cancer cells called blasts in her blood. By Thursday afternoon, her blood was 52 percent blasts. They’d caught the cancer almost as early as they possibly could have.

By the end of her first day at CHOP, oncologists had a complete diagnosis for Hailey. She had acute lymphoblastic leukemia (ALL), the most common form of cancer in children. The medical team was impressed by how proactive Hailey’s pediatrician had been.

“They called our doctor to tell him he did a really good thing,” says Missy.

Just five days after Hailey had first complained of pain, she had surgery at CHOP to have a temporary device called a port placed under her skin. A port is a less painful way for the medical team to give children chemotherapy and other treatments, because they can inject medication into the port and avoid painful needle sticks. Hailey stayed in the Hospital for nine days to recover from the procedure and begin chemotherapy.

“Hailey never complained,” says Missy. “She thought CHOP was a hotel! She was having so much fun with the child life specialists who came to play with her. I had never been to CHOP and didn’t know what to expect. It didn’t feel like a hospital to me. She had a place to play. I didn’t feel any pressure from anyone. They just wanted to help us. I had a lot of questions for the doctors and nurses and they were so patient, which was very comforting. I felt like, OK, we’re going to be OK here.”

Hailey’s treatment plan consisted of eight months of chemotherapy, which she received at CHOP Specialty Care and Surgery Center in Voorhees, NJ, not far from the family’s home in Columbus, NJ. She responded quickly to chemotherapy. Just four days into her treatment, a bone marrow aspiration and spinal tap showed no cancer cells.

Although Hailey was responding well, with an excellent prognosis, the family had to make some adjustments.

“I took a leave of absence from my job to be home with Hailey,” says Missy. “I was worried about keeping the house as sterile as possible, so I kept her older sister, Lily, out of preschool. My husband was really the only one coming in and out of the house. For about eight months, we just stayed here and did our own thing.”

Hailey lost her hair from chemotherapy and had a few fevers that required antibiotics, but otherwise she got through treatment fairly easily.

In August 2012, she had her port removed and entered the maintenance phase of her treatment, which means she’ll have outpatient chemotherapy approximately once a month through January 2014. Now all of her medications are taken orally.

Hailey joined her older sister at preschool in September 2012. “She just does her thing,” says Missy. “She doesn’t bat an eye. She is a healthy, normal kid.”

Soon after Hailey started preschool, Missy and her brother decided to run in the Four Seasons Parkway Run & Walk, the largest annual fundraiser for the Cancer Center at CHOP.

Four-year-old Hailey was chosen as a Parkway Run 2013 Ambassador. She is one of 12 children who will represent the thousands of kids diagnosed with cancer each year. Her team of family and friends is called Hailey’s Heroes, and they’ll work to raise money for childhood cancer research and survivorship programs throughout September, which is Childhood Cancer Awareness Month.

“There’s a stereotype that goes along with cancer,” says Missy. “It’s the ‘C’ word, especially when it comes to children. No one wants to talk about it. But the more you talk about it, the more educated you become. A cancer diagnosis is not a death sentence. People are misinformed about childhood cancer, and it’s important to be educated. That’s why Childhood Cancer Awareness Month is so important."

“People say, ‘I don’t know how you do it.’ But you just do, you can’t run away from it all," Missy says. "And Hailey’s so brave and spirited; it makes it easy to fight.”

Breakthrough stories like Hailey's are made possible, in part, thanks to generous donations to the Cancer Center. With your support, we can provide innovative care, pioneering treatments and lifesaving cures to more children — today, tomorrow, and for years to come.