Two weeks after 11-year-old Toni’s foot pain began, she was an inpatient at Children’s Hospital of Philadelphia (CHOP). Toni wasn’t sure why she needed all the medical tests being performed — she just wanted to go home. 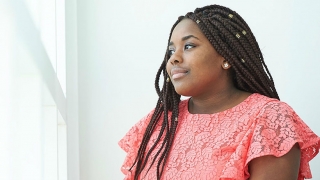 It was the end of August 2014 when Toni first complained that her foot hurt. Her parents, Tonya and Tony, took her to Med Express. Toni had an X-ray and was given a boot to wear.

A week later she was still limping, but now her hands were swollen and painful. Toni’s parents took her to Lawrence Ahr, MD, her pediatrician at CHOP Primary Care, Mount Laurel, NJ. He recommended ibuprofen and gave the family a prescription for bloodwork if the pain continued. “A week later she was still limping,” says Toni’s father, Tony. “She couldn’t keep up with us.”

They decided to get the bloodwork done. The next day, “Dr. Ahr called and told me to pick up Toni immediately and get her to CHOP. They told us to pack a bag for Toni.” The pediatrician had spoken with Barbara H. Greenbaum, MD, a pediatric oncologist at CHOP. After reviewing Toni’s test results, Dr. Greenbaum sounded the alarm. She wanted Toni seen by a specialist right away.

When the family arrived at CHOP, Toni had her blood drawn again. Out of the earshot of Toni, her parents asked doctors what they were looking for. “They told us it was acute lymphoblastic leukemia and wanted to take Toni to the oncology floor,” Tonya says.

The next day, doctors performed a spinal tap on Toni, which came back fine. Then, doctors had a meeting with Toni’s parents and explained the next steps — including the two-year treatment process that lay ahead of them.

At first, Tonya didn’t want to tell Toni. “I didn’t want her worrying about that. She was only 11 years old,” her mom explains. But Tony calmly explained the situation to his daughter and said the doctors and nurses at Children’s Hospital would help her get better. Toni looked to her dad for reassurance: “You said I was here to get better, right? Then, that’s all that matters.”

“I didn’t think anything about it really when they told me,” Toni says. “I was just like ‘OK’ and kept going about my day. I couldn’t believe it.”

Toni was admitted for a three-week hospital stay and began intensive chemotherapy. She and her parents struggled to accept life with cancer, but the nurses and child life specialists tried to make the hospital experience as pleasant as possible for the sixth grader and her family.

“Every nurse we had was awesome and the child life specialists were amazing,” Tonya says. There were days where I was walking around in a fog and they were really nice.”

Toni came home on Oct. 7, and then continued outpatient chemotherapy at CHOP Specialty Care and Surgery Center in Voorhees, NJ. Tony says CHOP team members helped the family create a treatment schedule that was convenient and allowed the family to live their lives as normally as possible.

During outpatient treatment, Toni’s positive, upbeat and pleasant attitude so impressed Darlene S. Hammel, MSW, LSW, one of the social workers at CHOP Voorhees, that she asked the preteen to speak to other children at the clinic. “I’d give the kids words of encouragement,” Toni explains. “I would talk to them so they wouldn’t be sad.”

And while all of the kids at the clinic were tired, somehow Toni managed to convince them to do crafts to get their minds off treatment.

Darlene introduced Toni’s family to Camp Happy Times through the Valerie Fund, and soon Toni became one of the camp’s biggest supporters and encouraged other kids who have had cancer or currently have cancer to come to camp.

“I met a lot of great friends at camp,” says Toni. “I’m going to camp again this summer for one week. You’re just out with everyone, no phone, it’s really fun. This year I’ll bring a camera so my parents can see what it’s like.”

Toni and her family fondly recall their experiences with the caring, dedicated CHOP team throughout Toni’s treatment. They credit Nicholas F. Evageliou, MD, Dr. Greenbaum, and a half dozen nurse practitioners, nurses and child life specialists for the excellent care delivered to Toni.

“The team always wanted to see Toni do well. They really encouraged her,” says her father.

Toni believes her cancer experience and treatment at CHOP has fundamentally changed her for the better. “I tried not to show people when I was sick,” Toni says. “I figured I might as well just be happy because I know I’m going to get better.”

Toni completed chemotherapy on Jan. 10, 2017, and in June she graduated from eighth grade. While she still gets her bloodwork checked monthly, Toni is focused on the future.

“I don’t think it’s possible to go back to the same person I was before, because a lot of things have happened,” Toni says. “I just have to cope with the person I am today. It’s who I am.”