After failing a hearing test at school, 7-year-old Hannah’s parents turned to Children’s Hospital for answers. Within weeks, she was getting surgery at a CHOP Specialty Care and Surgery Center in King of Prussia. 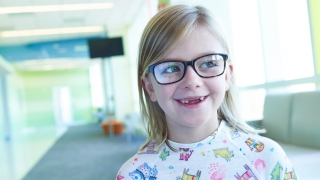 “She never told us she couldn’t hear the teacher,” says Courtney, Hannah’s mom. “We thought it was just 7-year-old selective hearing!” It was the beginning of second grade, and Hannah had just failed a hearing test at school. She failed a second time at an audiology appointment that same week. “The audiologist recommended we make an appointment with Dr. Elden at CHOP,” says Courtney. She made the call right away.

Lisa M. Elden, MD, MSc, FRCS(C), FAAP, is a Pediatric ENT Surgeon (ear, nose and throat) at Children’s Hospital of Philadelphia (CHOP). She was a great choice for Hannah because she sees patients at the CHOP Specialty Care and Surgery Center in King of Prussia, which is close to Hannah’s home in Conshohocken.

Making a plan for Hannah

After reviewing Hannah’s X-rays, doing an examination and learning about her medical history, it became evident that the failed hearing tests were related to more complicated issues. In addition to her hearing problem, Hannah wasn’t able to breathe through her nose and used an inhaler to control her asthma. Throughout her whole life she suffered from constant colds and ear infections.

Dr. Elden recommended that Hannah have her adenoids removed, a procedure called adenoidectomy. Adenoids are similar to the tonsils. They are made up of lymph tissue and are located in the space above the soft roof of the mouth. Adenoids may cause problems if they become enlarged or infected, which was the case for Hannah.

Hannah’s surgery would be outpatient, meaning she would go home the same day. At the same time of the adenoidectomy, Dr. Elden would also drain the fluid in Hannah’s ears. The combination of the two procedures would improve Hannah’s hearing, breathing and overall health.

Three weeks later, in October 2016, the family was back in King of Prussia for surgery. Courtney was anxious about what was to come, but the staff at CHOP put her at ease. “Everyone was so helpful and nice throughout the entire experience. From the receptionist who greeted us, to the nurses and doctors who treated Hannah, everyone we came into contact with was kind and supportive,” says Courtney. “This was the first time any of our kids have had a surgery. I was nervous, but they really helped us stay calm. And the facility is amazing.”

Hannah sailed through the day without issue. Her surgery began at 9 a.m. and she was home resting comfortably by early afternoon. She was out of school for a week while she recovered, but it was worth it for the improvements she’s already experienced.

“Since the surgery Hannah has been doing great!” says Courtney. “She passed her recent hearing test at school for third grade, hasn't had any colds or stuffy noses yet this season and best of all, was able to play her entire soccer season without hardly having to use her inhaler, which is amazing.”

Hannah will continue to follow up with both audiology and ENT specialists to make sure she stays on track. And Courtney just loves seeing her daughter healthy for once, able to hear every word she says and breathe easy.

“We couldn't be happier with how the surgery went and how Hannah's quality of life has really improved since the surgery,” she says. “We are so thankful for Dr. Elden and can't say enough about how much we appreciate her and everyone at CHOP for helping our daughter."