When Chase was 3, a life-threatening infection led to the amputation of his hands and feet. At CHOP’s Center for Rehabilitation, he improved his core strength and learned how to use his prosthetic limbs. Now 8 years old, he loves playing all types of sports, is an avid gamer, and enjoys drum lessons. 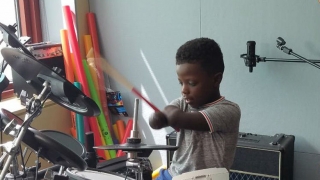 It was the trip every little kid dreams about: Chase, 3, and his brother CJ, 5, were headed to Disney World with their parents, Chisa and Chad. There would be breakfast with the characters, parades down Main Street, rides and fireworks.

Chase had been thrilled to go. But once the family got there, he started showing signs of not feeling well. “He became very sluggish and was just not his normal, cheerful self,” says Chisa. So instead of the Magic Kingdom, the family went to an urgent care facility, and then to a hospital emergency room. But Chase kept getting worse. His blood pressure was extremely high, and he was not responding to the fluids given to help with what was thought to be dehydration. The family was put into an ambulance and sent to the local children’s hospital.

It ended up that Chase had a strain of the flu that nearly killed him. He went into septic shock and lost consciousness. He suffered a brain hemorrhage, requiring emergency surgery, and was put into a medically induced coma. Chase also had many blood transfusions and required dialysis.

The family spent a very difficult month in Florida, many miles from their home and family and friends in New Jersey. Chase remained in a coma. After a month, the family and Chase’s pediatric neurologist worked with Children’s Hospital of Philadelphia to transfer him from Florida to CHOP.

The sepsis caused Chase’s blood-clotting mechanism to ramp up, and so he needed to be on medications that kept blood circulating to his major organs. The tissue in his hands and feet, however, wasn’t getting enough nourishment. Necrosis, death of the tissue cells, was progressing.

The decision to amputate Chase’s hands and feet was made a few weeks after the family returned to Philadelphia. He underwent a few surgeries to see if any tissue could be saved, but it wasn’t possible because of the extent of the growth of e. coli bacteria.

Doctors began weaning Chase off of his many medications. One evening Chad was at Chase’s bedside in the Pediatric Intensive Care Unit and saw something remarkable: Chase’s lips were moving. He was waking up. “It was a late night, and I was on my way home with CJ so he could go to school the next morning,” remembers Chisa. “Chad called me and said, ‘You have to see this!’ He messaged me a video of Chase saying ‘mommy.’ I’m not sure who was more excited, CJ or me. I couldn’t wait to get back to the hospital the next day.”

After Chase woke up, “We needed to tell him his hands and feet needed to be amputated,” says Chad. The parents came up with a solution: They told him he would have robot hands and feet.

“Chase was like, ‘OK!’” says Chad. Indeed, the idea sounded pretty cool. CJ wanted to know why he couldn’t have robot hands and feet, too.

The amputations took place at CHOP in December 2013. Chisa and Chad were heartbroken — but then they saw how resilient their son was. It didn’t take long until Chase was eagerly jumping out of his wheelchair, wrestling with his dad and playing with his brother.

At CHOP’s Inpatient Rehabilitation Unit, the first thing Chase wanted to figure out was how he could hold a Wii remote. Fitted with a strap, he was soon playing like nothing had changed.

Chase had daily sessions with physical therapists, occupational therapists and speech therapists. “He called it ‘rehab school,’” says Chisa. The parents appreciated the friendly environment they found there. “They were all very helpful, very organized,” says Chisa. “They took to his personality right away. They also understood it would be a long journey.”

But Chase sped along his rehab path. “Before he was able to walk on his prosthetic legs, he would ride around the unit on a tricycle,” remembers Chad. After he got accustomed to his prosthetics, he was back playing sports again — track, baseball and soccer. 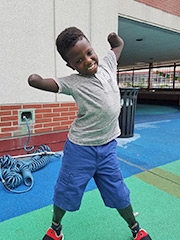 Now 8, Chase is showing everyone that he can do whatever he sets his mind to. His summer day camps are able-body, not special needs. He participated in the 2018 Adaptive Sports USA Junior Nationals competition and won three gold medals in track and field. He’s learning to play the drums — he has special hand prosthetics to hold drumsticks, but he can play even without them.

“He doesn’t like to use his arms,” Chisa explains with a shrug. “When they play video games, my older son says, ‘Chase always beats me!’”

His future is wide open. “Like most kids, Chase has new ideas all the time of what he hopes to be when he grows up,” says Chisa. “One day it’s a teacher, and the next it’s an athlete. Chase is here with us for a reason, and we can’t wait to see what life has in store for him!”