Nora, 9, has never let her food allergies get in the way of a good birthday party. But she also has severe asthma, so her heart sank when she arrived at a friend’s party recently to find the kids gathered in the basement. Typically, the musty air would trigger an asthma attack. 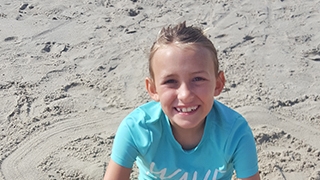 Thankfully, because Nora had recently started biologic therapy at the Allergic Asthma Program at Children’s Hospital of Philadelphia (CHOP), she was able to enjoy the party without using her inhaler.

When Nora got in the car after the party, her mother Michelle asked if she had any issues related to her asthma or food allergies.

“Nora just smiled and said she hadn't even thought about it," Michelle says. "She went on to chat with me about how she was able to enjoy the party without needing her inhaler, which made her feel more like a normal kid.”

Nora was a fussy infant. Her parents, Michelle and Adam, thought she would grow out of it. But when Nora’s first taste of formula at 3 months old sent her into anaphylaxis, they connected her discomfort to food allergies.

Initial testing indicated Nora was allergic to soy, yet Nora’s fussiness continued and she broke out into “mystery rashes” even after Michelle eliminated soy from her own diet to avoid passing it to Nora through her breast milk. Nora’s pediatrician referred them to CHOP’s Allergy Program for a second opinion.

“I was glad we sought out CHOP at the recommendation of our pediatrician. It was a life-saving decision.”

Nora’s symptoms improved with her new eating plan, but didn’t disappear. She caught her first cold at 6 months and was powerless to fight it off. “She seemed to be struggling to breathe,” her mother remembers.

Nora was again admitted to the local hospital where she was diagnosed with asthma and prescribed oral steroids and treatments with a nebulizer. It was the start of a pattern. Every winter, Nora would be admitted to the hospital with an upper respiratory infection.

As Nora grew, her family handled her food allergies and asthma as separate issues. A local pulmonologist treated Nora's asthma, and her food allergies were monitored through annual visits with pediatric allergists at CHOP’s main campus and CHOP Specialty Care Center in Exton, PA.

“We had a plan as to how to get through colds and knew the interventions necessary to keep her airways open so her body could fight the infection,” Michelle says. Nora used three different inhalers daily with higher dosages and nebulizer treatments whenever she caught a cold.

But the asthma was persistent and severe. Nora didn’t sleep well at night. Each winter, she would go through dozens of inhalers. And the oral steroid made Nora uncharacteristically irritable. Her parents thought Nora’s symptoms were under control but an incident when she was 8 years old showed them just how dangerous their daughter’s asthma and allergies were.

Michelle had just served Nora a pizza made with a cheese substitute when she realized something was wrong. “I looked at her and she was kind of itchy and feeling uncomfortable.” Michelle grabbed the cheese packet and realized she had mistaken a lactose-free brand for vegan cheese. Nora was quickly becoming very swollen and said, “I can’t breathe.” Her mother administered her EpiPen® and rushed Nora to her local hospital, where she was treated with more epinephrine and other medications, monitored and released.

Dr. DaVeiga explained to the family that Nora’s reaction to milk was life-threatening and with further testing described how her milk specific-IgE levels were extremely high. Michelle felt helpless and terrified; Nora had only consumed a tiny amount of cheese. How could she protect her daughter in the future?

Dr. DaVeiga explained that poorly controlled asthma increases the risk of poor outcomes from a food allergy reaction and Nora’s lung function testing had begun to show signs of significant airway obstruction from her asthma. She recommended monthly injections of a biologic therapeutic medication that binds to the IgE allergic antibody in the blood stream, blocking its actions.

“I realized how sick Nora really was and that we needed to do more to help with her quality of life in both asthma and allergies,” Michelle says.

“Dr. DaVeiga has been an incredible advocate, even fighting with the insurance companies for Nora. I’m super grateful that she did because we’re seeing such great changes in Nora.”

The first sign of improvement came less than two weeks after Nora’s first injection at CHOP Specialty Care Center in Exton. She was sitting in the living room with her family when she suddenly gasped. “I said, ‘What’s wrong?’” her mother remembers. Nora answered, “’I feel like I just took a deep breath!’” Michelle realized that might have been the first time her daughter was able to fill her lungs.

Nora continues to see Dr. DaVeiga for her asthma and allergies. Since starting the biologic therapeutic medication for asthma, Nora has not needed to go to the hospital and has only rarely needed extra asthma medication. Recent testing show Nora's lungs have returned to normal functioning.

Michelle says her daughter never dwelled on her asthma or food allergies. But as a kid who loves gymnastics, dance, singing and playing the piano, Nora is now enjoying a life in which she can breathe more easily.