This is not a story about superb medical care, although that plays a part. Nor is it about an incredible recovery, though that did occur. This is a story about a nurse and the impact one team member can have on a family’s experience. 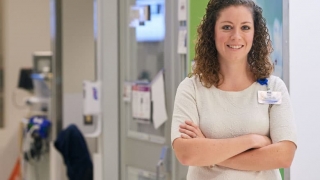 The doctors’ faces were grave. As Aliya and David McCullough sat nervously in their son’s hospital room at Children’s Hospital of Philadelphia (CHOP), they were told that he might not survive. And if he did, there was a chance of brain damage.

Just days earlier, 3-year-old Austin had been active and playing. Now he lay sedated and connected to a breathing tube in CHOP’s Pediatric Intensive Care Unit (PICU). How had it come to this?

It was early spring when previously healthy Austin developed flu symptoms. He was feverish and lethargic, and despite rest and care at home, his condition worsened. He began having seizures. His concerned parents decided to take him to the local emergency room.

There, the seizures continued. Unable to stabilize Austin, the ER team recommended he be transported to CHOP by ambulance. He was admitted to the hospital’s PICU.

A CT scan revealed swelling in Austin’s brain, and the CHOP team was concerned that it might herniate, a potentially fatal complication. To allow the brain to recover, Austin was sedated and placed on a ventilator to assist his breathing. It was in the midst of this urgent activity and a jumble of emotions that the McCulloughs met the nurse who would provide the bulk of Austin’s bedside care: Laura Douglas, RN, BSN.

‘Whenever We Saw Her, We Exhaled.’ 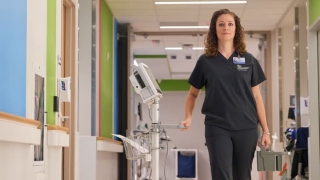 Nurses in the PICU are typically assigned to one patient for their shifts. This allows the closest monitoring of very sick children and, equally important, allows a relationship to form between nurse, patient and family.

In the days and nights that followed, Douglas would become what the McCulloughs called their “rock in the PICU,” not only providing expert nursing care to Austin, but also serving as teacher, advocate and emotional support for his fearful parents.

“She understood the medicine, but she also understood us as a family,” says Aliya.

‘She Advocated for Us’

The approximately 300 nurses who staff CHOP’s PICU are highly trained in the most advanced patient care. They are also gifted with an intuitive ability to connect with the children and families in their care.

Austin’s care was rigorous. He had neurological checks every hour, 24 hours a day. He received antibiotics and medication to combat inflammation, as well as sodium chloride infusions to reduce fluid in the brain. His temperature was controlled to prevent fever and possible additional brain injury.

Throughout what Aliya describes as “a time when we thought we might lose Austin,” Douglas was there for the McCulloughs. In lighter moments, they joked and laughed together. When the situation seemed less hopeful, Douglas was both an ear and a voice for the family. “She didn’t sugar coat — but she was really good at helping us manage our emotions,“ says David.

One afternoon, the medical team arrived to explain the results of Austin’s latest MRI. With emotions running high, something was lost in translation and the McCulloughs were left confused and anxious. Douglas quickly interceded, clarifying certain points and arranging for a physician to return and provide a fuller explanation.

“She didn’t just advocate for Austin, she advocated for us,” says Aliya.

Within a week, Austin was gradually weaned from sedation and his breathing tube. Scans of his brain showed that the swelling had diminished, although the CHOP team cautioned that residual damage might mean Austin would have to re-learn the most basic skills, like walking and talking.

Happily, that never came to be. With each day, Austin grew stronger. His parents and care team were surprised and thrilled with his recovery. He could walk and talk, and he most definitely wanted to go home.

Upon discharge from CHOP, he was referred to CHOP’s Center for Rehabilitation for follow-up, but after just one visit, it was determined that no further rehabilitation was needed.

Today, his parents describe Austin, now 4, as “a fireball.” He loves school and playing with his big sister, and is constantly on the move. It is possible he will experience some late effects of his brain swelling, but so far, he has shown none. His pediatrician calls Austin’s recovery “a miracle.”

The McCulloughs are warm in their praise of the entire CHOP team that cared for their son. “If Austin wasn’t at CHOP, I think things might have been different,” says Aliya. “They were so good.”

But when they think of their dramatic journey, they always come back to one person: “We are so grateful to Laura — we can never repay her.”