When Anthony meets someone new, his response is always the same. He looks them in the eye, thrusts out his right hand and says, "Hi. I'm Anthony Martinez Jr. Pleased to meet you." 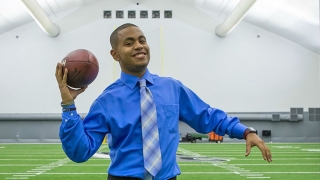 His formal greeting is just one of the reasons he’s been nicknamed “the mayor” at his high school. “Anthony wants to meet everybody,” says his mom, Sandra Martinez. “And he remembers everyone; he never forgets a face.”

Anthony wasn’t always so outgoing. As a baby, he was slow to talk and rarely made eye contact. His family was worried, so Anthony’s pediatrician referred them to Children’s Hospital of Philadelphia (CHOP).

Anthony’s family was initially stunned, but quickly leapt into action mode: What services could help him right away? What long-term support could help Anthony live as normal a life as possible?

Dr. Burgess, along with CHOP’s Division of Developmental and Behavioral Pediatrics and Autism Integrated Care Program helped the family navigate the daily challenges, connecting them with assessment and early intervention services near the family’s home in South Jersey.

Adjusting to the challenges of autism

Early on, there were challenges as Anthony and his family struggled to connect and understand each other. With limited language skills, Anthony quickly became frustrated and sometimes acted out.

“I remember one year, I was getting called to school every day,” says Anthony’s mom, Sandra. “He didn’t have the communication skills to express what he wanted or needed.”

But with intense therapy and medication, Anthony flourished. By second grade, he no longer needed medication to control his behavior. He attended classes with his peers and received extra help when needed.

Now 19, Anthony is doing well. He is attending an extended educational program at his local high school where he gets work experience and continues academic classes. He works part-time at the school’s bagel shop, learning how to prep food, cook sandwiches, use the cash register and interact with customers — which he enjoys the most.

In his free time, Anthony loves playing, watching and talking about sports. He plays on basketball and baseball teams with other teens with disabilities. His mom says, “he’s got great hand/eye coordination,” while Anthony says, “I’m a good shooter — especially three-pointers.”

Anthony also loves video games and hanging out with friends. Sports, however, is where his heart is.

“I love the 76ers, Eagles, Flyers, Phillies — all the Philly teams,” Anthony says. His favorite team to watch is the recently crowned Super Bowl champion, the Philadelphia Eagles. “I really like Carson Wentz,” Anthony says. 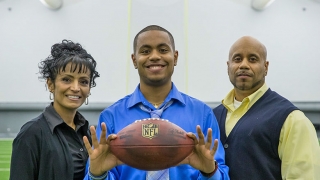 Anthony and his family have been die-hard Eagles fans for years. Thanks to the Eagles partnership with CHOP, his family has had the opportunity to meet a number of Eagles players and participate in fundraisers to support autism research at CHOP.

“Last year, we were one of the top fundraisers for Huddle Up for Autism and we won tickets to any Eagles game we wanted,” Sandra says. “We were able to go early and watch the team practice and Anthony went on the field and ran through the tunnel where the players come out at the beginning of the game. He was so excited.”

Anthony’s family regularly participates in the Eagles Autism Challenge, a one-day bike ride and 5k run/walk to raise funds to support a coalition of Philadelphia institutions — including CHOP — that are working together to advance autism research.

“We really want to understand this disease, why it happens, and how to better treat it,” Sandra says. “Dr. Burgess helped us so much when Anthony was younger. Fundraising to support autism research at CHOP is one way we can give back and help other families like ours.”

Anthony and his family are hopeful about his future. He’s taking driver’s education classes now and hopes to be able to earn his license soon. He wants to work and eventually have his own apartment.

“Anthony is very smart and very determined,” Sandra says. “With the right support, I don’t think there’s anything he can’t accomplish.” 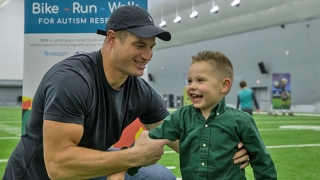 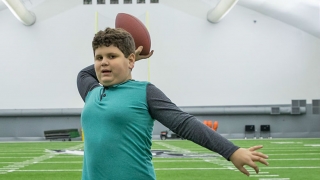