After Lexi was diagnosed with lymphoma, she underwent two and a half years of chemotherapy and radiation. “Lexi had a very rough time with her therapy,” says her mother, Janine. But Lexi had something else: the determination of a superhero. “She said she was going to fight just like Wonder Woman,” says Janine, who calls her daughter “awesome.”

When Lexi was 10, she began losing her hearing. At the time, there was some family upheaval, and Lexi’s pediatrician considered the possibility that Lexi was looking for attention. Everything else about her health, including bloodwork, appeared normal. Over several weeks, Lexi underwent various hearing tests with Children's Hospital of Philadelphia (CHOP) audiologists. Then she was seen by a CHOP ear/nose/throat specialist who felt something was not right and scheduled an immediate brain MRI. The next day, the diagnosis came: stage 4 B-cell lymphoblastic lymphoma.

“Her lymphoma was wrapped around the nerves that affected her hearing,” explains Susan Rheingold, MD, Medical Director of CHOP’s Oncology Outpatient Clinic and Lexi’s oncologist.

While undergoing treatment, Lexi missed a lot of school, which made her sad. She also had to give up the dance classes that she loved. But she always tried to keep up her superhero spirit. “Lexi got very well known on the oncology floor as Wonder Woman,” says Janine. “The nurses and staff, especially child life, would call her Wonder Woman.”

As therapy reduced the cancer, Lexi’s hearing recovered. Sadly, though, as one of her senses returned, another was devastatingly taken away: “Lexi lost her vision,” says Janine. “Her optic nerves are damaged and cannot be repaired. She will never be able to drive a car or do things she used to do, like hit a ball with a bat.”

“The loss of vision related to the fact that her lymphoma had also wrapped around her optic nerve and she needed emergent radiation,” explains Rheingold. “It’s very rare to lose vision like that with radiation, but she did.”

Then came another blow. As Lexi was ending treatment in November 2018 and was receiving her last spinal tap, the results showed something suspicious and she was monitored closely. In January 2019, doctors determined that Lexi’s cancer had relapsed in her spinal fluid. 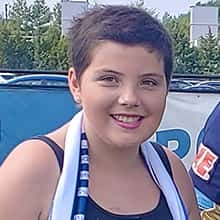 Because she had a great deal of toxic side effects from her therapy, with her first relapse she was eligible for CAR-T therapy, which harnesses a patient’s own immune system to help destroy cancer. Lexi’s T cells, a type of white blood cell, were collected, reprogrammed in a lab so they could recognize the cancer cells, and infused back into her. “She was infused now over a year ago,” says Rheingold, “and has no evidence of disease since.”

It’s been a tumultuous journey for Lexi and her family. “We all had to make adjustments,” says Janine. Lexi, now 13, is constantly figuring out ways to navigate her home and school environments. It’s an ongoing process, says Janine, but one that Wonder Woman can conquer.