James is all about sports: football, basketball, soccer, you name it. His goal is to become a sports broadcaster. But a cancer diagnosis has put him on the sidelines soon after beginning his junior year of high school. 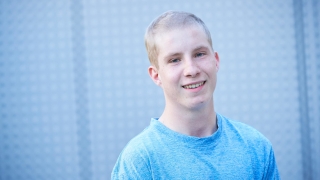 James is all about sports: football, basketball, soccer, you name it. His goal is to become a sports broadcaster. But a cancer diagnosis has put him on the sidelines soon after beginning his junior year of high school.

It started suddenly in October 2015 when James, now 17, experienced excruciating pain in the upper-right side of his back. His mother, Laurie, took him to an urgent care facility, where a heart murmur was detected. It was suggested that he go to a cardiologist, so Laurie took him to the CHOP Care Network Specialty Care and Surgery Center in King of Prussia. There, an echocardiogram showed a mass pressing up against his heart. “We were told to pack a bag and head to CHOP’s Main Campus,” says Laurie.

The diagnosis of B-cell lymphoma “didn’t faze me a bit,” says James, although at first losing his hair “was devastating to me. I was really mad about that.” Eventually, he decided to just make jokes about his remaining tufts of hair, comparing himself to Pebbles from “The Flintstones.” After six rounds of chemotherapy, in early March 2016 his Children’s Hospital doctors declared him to be in remission. James will be entering his senior year healthy and full of optimism.

Through it all, “Everyone from the environmental services people to the physicians always showed sincere support,” says Laurie. “The nursing staff were fantastic. They became our friends. They were always upbeat. That’s what helped me get through it.” Despite a cancer diagnosis, she was grateful for one thing: “There was always a lot of laughter.”

James is a Patient Ambassador for the Parkway Run & Walk, and his team is called the Bald Eagles — a name that combines his cancer treatment hair loss and his passion for the Eagles. The event is CHOP’s largest fundraiser for pediatric cancer research and care, and its goal is to create a future where no kid is sidelined by a cancer diagnosis.