It’s difficult to get any sleep when your child has hyperinsulinism. Elizabeth Thimme knows this all too well.

For the first 18 months of her son Cooper’s life, she or her husband, Brian, checked his blood sugar levels every two or three hours during the day and every three or four hours throughout the night.

Cooper was born with Beckwith-Wiedemann syndrome (BWS), a genetic condition that occurs in approximately one in 15,000 births. BWS is characterized by a larger size at birth and during childhood, hemihypertrophy (when one side of the body is larger than the other), macroglossia (larger-than-normal tongue), and an elevated risk of developing several types of cancerous and noncancerous tumors, especially during childhood. 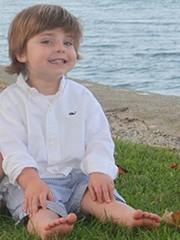 “He told us, ‘If we can’t get it under control here, I’m sending you to CHOP,’ and that’s what happened,” Elizabeth says.

Going to CHOP for HI expertise

Quintos had referred several previous patients, so he was familiar with the Congenital Hyperinsulinism Center at The Children’s Hospital of Philadelphia, home of the largest HI program in the United States. Sixty percent of all U.S. children born with HI each year are treated at Children’s Hospital. After a med-flight to Philadelphia, 4-week-old Cooper was under the care of CHOP’s HI experts, with Andrew Palladino, MD, as his inpatient endocrinologist.

Diazoxide, the first medication doctors usually try, didn’t stabilize Cooper’s HI. But injections of another drug, octreotide, four times a day — along with continuous dextrose — kept his blood sugar levels in the acceptable range. He had a gastrostomy tube inserted, and after four weeks at CHOP, Cooper went home.

“Dr. Palladino told us that it was possible he would outgrow his HI, but that it would take approximately 18 to 24 months,” Elizabeth says. “The first year I didn’t see much progress. Then that fall, at around 15 or 16 months, he started having high spikes, so we were able to decrease the dextrose and lower the dose of octreotide.”

His parents continued to wean him off both dextrose and octreotide over the next few months.

At 20 months old, Cooper returned to CHOP’s HI Center for evaluation. He successfully fasted for eight hours, with his blood sugars staying above 70 mg/dL. His HI was indeed transient — he had outgrown it. And Elizabeth could finally start getting a good night’s sleep, although she still tests his blood in the morning, keeps a close eye on him and gives him a snack if he “looks a little funny,” signaling his sugar may be on the low side.

Cooper is still carefully followed back home for other potential problems as a result of having BWS. He had tongue reduction surgery at 6 months old, and now at 2½, his speech is coming along.

“His speech is really starting to blossom,” Elizabeth says. “He’s had a lot of speech therapy, and we’re lucky that here in Rhode Island the state provides it. The therapist comes to the house.”

To watch for tumors, he has blood tests every six weeks and a stomach ultrasound every three months. Children with BWS are at especially high risk for hepatoblastoma (cancer of the liver), so doctors monitor their alpha-fetoprotein (AFP) levels, as high levels can be a symptom of hepatoblastoma.

Cooper’s AFP level was extremely high at birth, dropped significantly when he was first at CHOP, and now is well within the normal range. Because Cooper has uniparental disomy (UPD) type BWS — when both members of a chromosome 11 pair are inherited from one parent and the other parent’s chromosome for that pair is partially missing — he also will be checked for Wilms’ tumor (cancer of the kidney) until he’s 10 or 11.

Tumors develop in about 10 percent of people with BWS and almost always appear in childhood.

“Every day that goes by and he’s OK, we breathe a little bit easier,” Elizabeth says.

Gone is the pudgy face and chubby body from when Cooper was on medication and dextrose. His hemihypertrophy on his right side is slight.

“He’s highly energetic — like a little monkey. He’s fearless. He runs, he jumps, he loves any kind of ball. Intellectually, he’s right on target,” Elizabeth says. He plays with his big brother Max and baby brother Finnley, like any other 2 ½-year-old would.

For patients with complicated conditions like HI and BWS, Children’s Hospital has the breadth of expertise across specialties to ensure the best care.

“We’re so grateful for everyone on CHOP’s HI team,” says Elizabeth. “Everything they said would happen did happen. Because they see so many of these babies, they know what to expect. And that means we knew what to expect.”