When Mya was an infant, her parents, Lissa and Jeff, learned she had biliary atresia and would eventually need a liver transplant. Here, Lissa shares the story of her daughter’s journey to a transplant at CHOP.

As told by Mya’s mom, Lissa 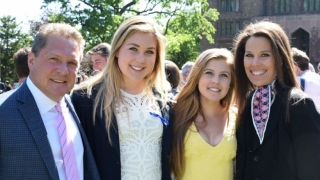 Mya (second from right) Mya was born perfectly normal. When she was 5 weeks old, though, we noticed that the whites of her eyes were yellow. We went to the pediatrician, had some bloodwork done, and when we got the results, the pediatrician said, "We can't help you, and nobody in Reading can. You need to go to The Children's Hospital of Philadelphia."

So we came to CHOP, where Mya was diagnosed with a choledochal cyst. We learned she needed to have surgery. It was during that surgery that her doctors discovered Mya had biliary atresia, which is a progressive, destructive disease of the liver. They performed a Kasai procedure at that time and hoped Mya's liver would drain bile for some period of time, which it did.

Mya was very lucky. We were told at the time of Mya's Kasai that in one-third of the children who receive the procedure, it’s unsuccessful almost immediately, and they need to be transplanted right away. Another third of the children will drain bile for some period of time, and one-third of children maybe make it a longer period of time. But I think we always knew that sometime in her teenage years, it would be likely she would need a liver transplant.

Mya spent the next number of years living a mostly normal life. She had complications from her liver disease including an extremely distended belly from her liver and spleen, so she had to wear a protective guard around her abdomen for any activity like gym class or riding a bike.

One of the biggest challenges was making sure that Mya had enough calories. With liver disease, she only absorbed about 70 percent of the calories she ate. We were always concerned that she had more than the normal calories and correct nutrients — more concerned than we were with our other daughter — so she would grow and develop normally. Two different times in her life she needed to have a feeding tube to help her. The second time we used a feeding tube was while she was waiting for her transplant. This also meant that she would need to stay home and attend school via teleconference, because she didn't go into her school with a feeding tube.

And we spent a lot of time in and out of the Hospital with various infections. Mya has never known a time in her life where she didn't take meds twice a day. But the people in the liver program at CHOP are amazing. They just give you a sense that you can have a normal life. Everyone in the Liver Transplant Program has a very calming effect, because they have such confidence. At no time do you ever feel like you can't get help, or you can't get an answer, or you can't get somebody on the phone. And they're very good at saying, "You know what? You're fine. Go to the pediatrician. Call me when you get to the pediatrician," or, "I think you better drive to CHOP now."

Throughout everything, regardless of what else is going on with the disease, Mya has never used her disease as a crutch. We just try to get past that, because everybody wants to be normal.

Time for a transplant

I think Mya was 12, maybe 12 and a half, when things really started to go downhill. She had a lot of trouble with GI issues that she just couldn't recover from very quickly. She was tired. She was having issues with her spleen. She was so unbelievably thin. We knew a transplant would probably be necessary soon.

The best thing we did at the Hospital was ask to have another patient who had been through transplant, who was about her same age, connect with her. They met and this teenage boy stayed connected to Mya via email and text until she was transplanted. To know that someone else had done it, and talk to that person about what really scares you about it, was just what Mya needed.

Mya's waiting period for a liver transplant was pretty long. I think it was depressing for all of us. You can't really play with your friends because you might get an infection. If you go out in public, you wear gloves and a mask. We didn’t have any calls where we ran to the Hospital and got sent home, but we waited, and waited, and waited, and waited.

She waited close to 18 months for a transplant. In the spring of 2013, Mya was transplanted. When we got the call that there was a liver available, I wasn’t nervous. I was so confident in the liver team, and the transplant team. They eat, sleep and breathe liver transplants.

One of the things that the liver transplant team does is prepare you exceedingly well as a parent, and as a family, for what you will see when your child comes out of surgery. There are so many lines and tubes and you need to be prepared to see all of those things.

Since her transplant, Mya has had a whole new life. She wasn’t able to play sports before, particularly contact sports, because of the risk of a splenic rupture. Now, Mya's been invited to try out for the varsity tennis team at her school. She ran track. She was the MVP of her softball team this year. She’s really gotten right into life and everything it has to offer.

Mya has always been an incredible child. She's independent, she's confident, and she's just amazing. I always tell her she's the strongest person I know.