A terrible car accident when he was 5 left Sam with a serious brain injury. With therapy and surgery, including an innovative procedure to restore the nerve connections in his right eye, Sam has rebounded wonderfully. Now 8, he recently represented his school in a district speech competition, where he recited a poem he had memorized. 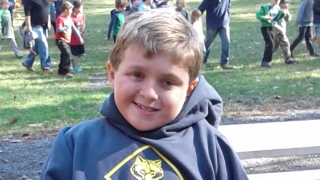 On Nov. 5, 2014, Sam was in the back seat when the family car was rear-ended; he was rushed by ambulance to Children’s Hospital of Philadelphia (CHOP).

Sam had suffered a severe and potentially fatal traumatic brain injury. He was taken into emergency surgery, where Phillip B. Storm, MD, Chief of the Division of Neurosurgery, removed the right side of his skull to relieve the enormous pressure on his brain.

Later that night came a small miracle: Sam moved his hand. The family rejoiced. At the end of the week, an MRI revealed more good news: The left side of Sam’s brain, which controls language, math, and the right side of the body, had largely escaped injury; so had the front of Sam’s brain, the part that controls personality. 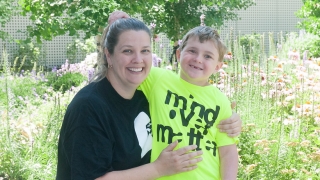 After his surgery, Sam spent three weeks in the Pediatric Intensive Care Unit (PICU) in an induced coma. After he was brought out, he couldn’t sit up, lift his head or move any part of his body at first. He couldn’t even talk or see.

A huge turning point came when the pressure in Sam’s brain had normalized enough to close the opening in his skull. Six weeks after the accident, pediatric plastic surgeons and neurosurgeons performed a cranioplasty, attaching a customized prosthetic shaped to match the left side of his skull.

Sam faced significant obstacles. The damage to the right side of his brain resulted in many lingering problems, including paralysis on the left side of his body, eye damage, facial nerve paralysis and feeding and speech difficulties.

“It seemed like baby steps, followed by times when he’d progress rapidly,” says his father, Bob. “He’d plateau and then take off again.”

The family celebrated every small step, like when Sam finally pushed a button with his right hand, and when he swallowed a bit of a popsicle. Both breakthroughs came after weeks of trying.

As a result of Sam’s brain injuries, he lost peripheral vision in his left eye. In the beginning, it appeared he couldn’t see out of his right eye at all. But one day his occupational therapist noticed Sam’s reaction to a movement in the mirror, a sign of vision in the eye.

In February 2015, Sam suffered a setback when a scratch on his cornea didn’t heal. Doctors discovered a serious corneal problem behind the stalled healing, called an insensate cornea.

Insensate cornea means the cornea lacks nerve sensation, so it can’t “feel” a scratch or the irritation from debris in the eye. Normally, the brain sends signals to the eyes in reaction to irritation, which cause them to blink and produce tears. This cleans the eyes and protects them from further damage. But in Sam’s case, his brain injury had interrupted those messages that needed to pass between his brain, nerves and eyes.

Treatment options for insensate cornea are limited. Sam’s eye was sewn shut to protect the cornea from further damage, but even if it healed, it wasn’t a long-term solution. Without the ability to respond to sensations of irritation and infection, Sam was at risk for going blind in his right eye.

It was around that time when Phuong Nguyen, MD, a new CHOP  surgeon, joined Sam’s medical team. Dr. Nguyen had specialized training and experience in a breakthrough corneal reinnervation surgery known as corneal neurotization. This procedure is shown to restore nerve function to the eye in cases like Sam’s.

In corneal neurotization, a nerve would be taken from Sam’s leg and transplanted above his left eye, which still had feeling. The surgical team would then feed the nerve beneath the skin on his forehead and connect it to the damaged cornea. The new nerve connections would grow together over a period of weeks to months, gradually restoring sensation to the eye.

The family was on board, and Sam’s surgery was scheduled for January 2016. It would be the first corneal neurotization surgery performed on the East Coast in the U.S. Dr. Nguyen worked closely with William Katowitz, MD, an oculoplastic surgeon at CHOP, to perform the delicate procedure.

By early spring, once the nerves had time to rebuild and reconnect, it was clear that the procedure had been a success. When his damaged eye was reopened, Sam responded with blinks and tears to protect it, indicating he now had sensation in the eye. Confocal microscopy at the Scheie Eye Institute at Penn Medicine confirmed that there was new nerve growth and improved corneal health.

“We were overjoyed,” says Sam’s mother, Robin. “The success of the surgery means that his vision will be preserved in the future.” 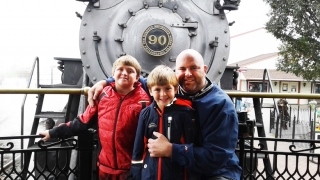 Now 8 years old and in the second grade, Sam continues to break through barriers with his determination. He can walk with a walker and has regained some movement in his left arm. He loves to ride a recumbent bike, built specially for him, that allows him to pedal with his left leg. Sam participates in a baseball league for kids with mobility challenges — the Challenger League. He joined the Boy Scouts this year and went on an overnight camp-out with his troop.

Sam loves to sing and to make rhymes, often combining the two passions in made-up songs that delight his family.

Cognitive exercises continue to help rebuild the functions damaged in the accident. An impressive sign of Sam’s progress came when placed into a district speech competition, reciting a poem that he had memorized.

“He was very proud,” says Robin. “We were all very proud. We never thought we’d be there. After his accident, it wasn’t clear that he would ever be able to speak again.”

When Sam returns for follow-up appointments at CHOP, he likes to visit his old friends at Children’s Seashore House and show his therapists his new skills. He proudly demonstrates his dance moves and high-fives with his left hand.

And then there is a hallway at CHOP that originally seemed miles long to Sam — it would take a team of therapists and a full hourlong session to get from one end to the other. Now, Sam takes off with the help of only a walker, leaving everyone in awe at just how far he’s come.