Diagnosed with leukemia at age 2, Austin was treated with chemotherapy, radiation and a bone marrow transplant, but relapsed twice. Finally, an experimental treatment at Children’s Hospital of Philadelphia (CHOP) turned his own immune system on the disease and eradicated it from his body.

Austin enjoys being outside with his friends, riding his bike, having Nerf gun fights and, when the weather is warm, playing in the pool. At 9, he’s a happy, energetic boy. Thanks to an innovative treatment at Children’s Hospital, he’s been free of cancer for almost four years. 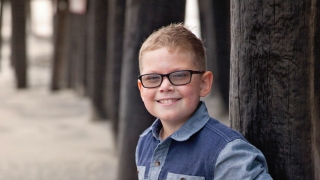 Austin’s medical problems began when he was 2, in May 2011. During a weekend family visit, his mother, Kim, and grandfather noticed lumps on the side of his neck. He didn’t look or act sick. He had no fever and was very active. Austin was sleeping well and eating normally, but Kim, who works as an oncology nurse for adults, was worried.

She took Austin to his pediatrician Monday morning. Because he looked so healthy, the doctor wasn’t alarmed. He diagnosed him with an ear infection and prescribed antibiotics. By Thursday, the medicine had done nothing to reduce the lumps in his neck, so Kim brought him back to the pediatrician. This time, a different pediatrician saw him and she sent them to the emergency room at their local hospital in Madison, Wisconsin.

Blood tests revealed a troubling sign: Austin had a higher than normal proportion of immature white blood cells, which can be an indicator of leukemia.

Austin was taken from his local emergency room by ambulance to a children’s hospital in Wisconsin, where a bone marrow biopsy confirmed the diagnosis. He was diagnosed with a form of acute lymphoblastic leukemia (ALL) containing an alteration in a gene called MLL (mixed-lineage leukemia). He began an intensive 3 ½-year chemotherapy treatment that day, which was followed by cranial radiation then daily maintenance medication.

He finished the maintenance phase of his treatment a year later, in April 2012, and appeared to be doing well. He looked healthy, enjoyed going to preschool, and had the energy of a normal 3-year-old. But, as when he was first diagnosed, appearances were deceiving.

At a monthly follow-up that fall, tests showed that the leukemia was back. Austin’s doctors now moved to the next step in treatment. They pursued a bone marrow donor and started chemotherapy again in preparation for a transplant in February 2013.

Austin responded well to the transplant. After five weeks, he was able to go home with tight restrictions on exposure to potential sources of infection. But again, the initial good news didn’t last. At his two-month checkup, tests showed that the leukemia had relapsed for a second time.

Austin’s outlook was bad — the doctor made it clear that they had run out of options for conventional treatment. He suggested they pursue an experimental immunotherapy treatment at Children’s Hospital of Philadelphia (CHOP).

A new option for Austin

The treatment involves removing T cells (a type of immune cell) from the patient, altering them so that they can recognize and attack leukemia cells, and placing them back in the patient’s bloodstream to go to work.

Kim, as an oncology nurse and the mother of a child with leukemia, had followed news of progress in cancer treatment and had seen the news of Emily Whitehead’s successful treatment at CHOP a year earlier as the first pediatric patient in this trial. So she and her husband, Jeff, were open to consideration.

“We had no other choice at that point,” Kim says. “Without treatment, Austin had about six months to live. This was our only hope.”

They submitted Austin’s medical records and test results to see if he was eligible, and travelled to CHOP to meet with Stephan Grupp, MD, PhD, the pediatric oncologist leading the T-cell therapy study through CHOP’s Cancer Immunotherapy Program. The medical team at home in Madison prepared Austin for the procedure and resumed chemotherapy to get his disease under control by the time CHOP was ready to treat him.

Kim and Jeff flew with Austin to Philadelphia in October 2013 for an extended six-week stay. Austin received his altered T cells at CHOP in two injections a day apart.

After all of the rounds of treatment Austin had gone through, some of it debilitating and uncomfortable, this therapy was incredibly simple. He didn’t even need to stay overnight at the hospital for the treatment. He simply came in for the two injections, stayed for an hour each time to be monitored for reactions, then the family was free to go back to their hotel room. They needed to stay nearby for periodic check-ins and in case Austin had a bad reaction as his altered T cells started to clear out the leukemia, which is a risk of this therapy, but were otherwise free to enjoy Philadelphia as tourists.

“His only reaction to the treatment came about five days in, when he got a bad headache and a low-grade fever,” says Kim. “He was admitted for two nights. He needed pain relief medication for his headaches. Except for that, we spent the time as an extended vacation. We went to the zoo and saw the Liberty Bell and Reading Terminal Market.”

After one month in Philadelphia, tests showed that Austin had no evidence of disease. His altered T cells had expanded in his body and attacked the leukemia, just as they were designed to do. The family returned to Wisconsin, optimistic about Austin’s future and hoping that this time, the good news would last.

For the first year following his treatment, they came back to CHOP for follow-up appointments every three months.

For Kim, the breakthrough moment came a month after Austin’s immunotherapy procedure. On Halloween, which is her birthday, she was out trick-or-treating with him in the neighborhood when she got a call from CHOP. “He was at someone’s door in his costume when the phone rang. They were calling to let me know that his tests still showed no sign of the leukemia. He was cancer free. I broke down sobbing. It was the best birthday present I could ever have.”

Almost four years on, Austin remains cancer free. He returns to CHOP once a year for a checkup.

Austin looks forward to those trips. He thinks of Philadelphia and CHOP as his home away from home. And he has made a unique friend, who he always spends time with on those trips: Doug, his 56-year-old bone marrow donor, who identified himself to the family a year after the transplant. “The relationship that Doug and Austin have is really special,” Kim says. “From the moment they met they were best friends.”

Today, Austin is a normal 9-year-old. He loves to go fishing and camping with his father. He enjoys playing with his friends and riding his bike. He is an active Cub Scout, and he loves school.

But to his parents, watching him grow over these last few years has been a miracle. They are forever thankful for the innovative treatment that gave him a second chance.