If ever a child exemplified the quote “Be the change you want to see in the world,” it’s Emma. At 9 years old Emma has become one of the youngest advocates for celiac disease information and education. The slight redhead recently received a proclamation from her state representative for her awareness efforts – and had her name read aloud in the chambers of the Pennsylvania House of Representatives. 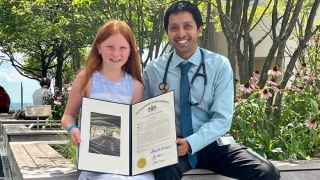 Emma proudly shows Arunjot Singh, MD, MPH, the proclamation she received from the Pennsylvania House of Representatives, recognizing her for her celiac awareness efforts. Emma was just 7 years old when her chronic stomach pain began. The “spikeys” – as she called them – made her miss school and dance class. Her mom suspected celiac disease because it runs in their family, and turned to Children’s Hospital of Philadelphia (CHOP) for confirmation or to figure out what else might be causing Emma’s symptoms.

In March 2020 – days before the world seemingly shut down due to the COVID-19 pandemic – Emma came to CHOP for blood work, an endoscopy and an examination by Arunjot Singh, MD, MPH, Pediatric Gastroenterologist and Co-Director of CHOP’s Center for Celiac Disease. Tests revealed Emma’s small intestine was severely inflamed and a biopsy confirmed she had celiac disease.

Celiac disease is one of the most common genetic conditions in the world, causing the body’s immune system reacts negatively to the protein gluten, found in wheat, rye and barley.

“Roughly one out of 100 people has celiac today and the number is continuing to rise,” Dr. Singh says. “Left untreated, celiac disease can cause chronic damage to the intestine and an increased risk of other nutritional and autoimmune disorders.”

In Emma’s case, the condition was caught before her immune system had suffered irreversible damage, but not before intestinal inflammation had at least temporarily affected her nutritional levels. Because her body could not properly digest foods containing gluten, she quickly passed many nutrients – proteins, vitamins, minerals, carbs and fats – from her food before they could be absorbed. This left Emma weak and malnourished until dietary changes could be made.

The pandemic provided a mixed blessing for Emma and her family, says her mom, Jennifer. “We were all at home together – Emma was attending school online and I was working virtually – so we could spend quality time together experimenting with gluten-free foods to see what she liked, and what gave her the energy she needed to learn and grow,” Jennifer says.

Celiac disease forced a substantial change in Emma’s diet. White, wheat and rye bread were out for sandwiches, along with many traditional sandwich fixings. “We had to create a whole new food plan for Emma,” Jennifer says. “And that took some time.”

Emma’s health fluctuated for months after her diagnosis as she struggled to find new favorite foods that did not contain gluten. Her family and clinical team at the Center for Celiac Disease supported her. In some cases, tasty alternatives were easily found and incorporated into her diet. Others were a bit more elusive – like crispy, deep-dish pizza, one of Emma’s favorites.

With help from her family, doctors and nutritionists Emma’s condition stabilized. She began to grow and gain weight, and slowly regained her energy levels. When her school reopened for in-person instruction, she was ready.

“Most of my teachers know I have celiac, and so do a lot of my friends, but parties at school can be hard sometimes,” says Emma, now a fourth grader. When classmates bring in treats for holidays and birthdays, their parents are not always thinking about whether a fellow classmate may have an allergy or food restriction.

In situations where food isn’t packaged or labeled – like cupcakes from home, Emma must avoid them. “If I don’t know if there’s gluten or not, I can’t eat it – even if I want to,” Emma says. “It makes me sad sometimes.”

Jennifer makes sure to send a stash of gluten-free alternatives to school, so Emma won’t feel left out.

Identifying a need to speak out

As Emma and her mom researched foods she could safely eat, they discovered a lack of standardized labeling for many products in their local grocery store and many specialty stores. While the U.S. Food & Drug Association requires food products to list wheat as a major food allergen, it does not require labeling for rye or barley. Instead, companies may voluntarily include labeling such as “may contain wheat” or “made in a facility with wheat” which would provide potentially life-saving information to patients with celiac disease or a wheat allergy.

“We want government leaders to pass laws to change food and drug labeling to identify if an item contains gluten or was made on the same machinery as other foods or medications that do contain gluten,” Jennifer says. “Even trace amounts from cross contamination can be harmful to kids like Emma.”

With Jennifer’s urging and support, Emma is dedicated to raising awareness of celiac disease and the challenges kids like her face. 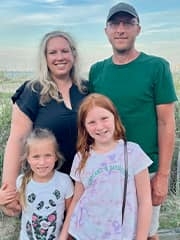 When Emma (front, right) was diagnosed with celiac disease, her family stepped up to help her deal with dietary and medical changes. With her are her sister Madison, 6, and parents Jennifer and James. In February, Emma wrote a letter to Pennsylvania State Rep. Sheryl M. Delozier (R-Camp Hill), telling her about celiac disease and sharing her experience as a young person with the disease. She asked Delozier to help her raise awareness about celiac disease by turning the lights of the State Capitol Building green for Celiac Awareness Month in May.

In April, Delozier responded with a handwritten note thanking Emma for her advocacy and applauding her efforts. Delozier said she couldn’t turn the lights green this year but sent Emma an official proclamation from the Pennsylvania House of Representatives, lauding her for her courage, compassion and championing of celiac education and acceptance. Emma’s name was also read aloud on the House floor during session.

The power of youth advocacy

“It’s incredibly powerful to have someone like Emma speak out,” Dr. Singh says. “The work she is doing spreading awareness about celiac disease sheds light on the challenges our children face and importance of the gluten-free diet to stay healthy. Clearly, it’s never too early to advocate. With persistence and by working together, we will see the changes Emma is rallying for.” 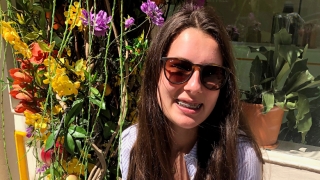 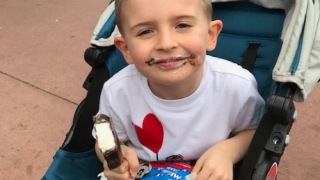 From homemade recipes to bakery cupcakes, this 5-year-old celiac patient is eating his way to wellness. Find out how. 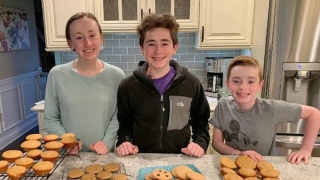 When Celiac Runs in the Family

CJ's slow growth prompted his family to seek answers; eventually leading to a diagnosis for him, his sister and his dad.