A year ago, brothers Shane and Grant seemed like polar opposites. Shane was a voracious reader; while Grant refused to sit still long enough to read one book. Shane was a hearty eater, while Grant often refused to eat. But a health scare for Grant led to an unexpected discovery for both boys: they had celiac disease and would need long-term care and monitoring. 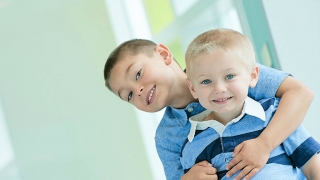 Last fall, when Grant was 3, he suffered rectal prolapse after excessive straining to take a bowel movement. His mom, Amanda, brought him to a local emergency department where a physician diagnosed the condition, prescribed fluids, and encouraged the family to see a gastrointestinal (GI) specialist if it occurred again.

Amanda didn't want to wait. Grant had experienced GI symptoms on and off since he was an infant, including belly pain, diarrhea and constipation; they needed answers now. She called Children's Hospital of Philadelphia (CHOP) and scheduled an appointment with pediatric gastroenterologist Lisa Fahey, MD, at CHOP's Specialty Care and Surgery Center in King of Prussia, PA.

At Grant's first appointment, Dr. Fahey examined the preschooler, ordered blood work, and prescribed a stool softener to treat his constipation. The blood test revealed that Grant had celiac disease, a genetic condition in which the body's immune system reacts negatively to gluten, a protein found in wheat, rye and barley. Celiac can damage the small intestine, prevent the body from effectively absorbing and digesting nutrients, and affect a child's growth.

Dr. Fahey and a team of experts from CHOP's Center for Celiac Disease and the Division of Gastroenterology, Hepatology and Nutrition met with Grant and his family to determine next steps. Celiac is a chronic condition and must be managed throughout a patient's lifetime.

"We met with a nutritionist [Kara Feigenbaum, RD, CDE, LDN] and she had so many different suggestions: What Grant could eat, how to look for gluten on food labels, where gluten hides, and how exposure to gluten — even if he doesn't eat it — can hurt him," Amanda says.

The family also learned about gluten-free alternatives to food and common everyday items. For example, Reese's® peanut butter cups are gluten-free, but the holiday varieties shaped like trees, pumpkins and eggs contain gluten.

"Navigating those first few weeks were challenging, but I created gluten-free sections and gluten-free drawers at home to keep gluten away from Grant," Amanda says.

By avoiding gluten, Grant's condition began to improve. His belly pain subsided, he no longer see-sawed between constipation and diarrhea, and he wasn't as moody.

Brother has celiac, too

Dr. Fahey reminded the family that celiac disease is often genetic. At CHOP, when one family member is diagnosed with celiac disease, clinicians encourage all family members to also be tested, even if they do not show any symptoms of the disorder.

Grant's mom Amanda, dad Shawn, and brother Shane had blood drawn for the test. Both parents tested negative for celiac disease. However, then-5-year-old Shane wasn't so lucky. His blood test showed elevated levels of the gluten protein. An endoscopy and biopsy confirmed the diagnosis.

"Shane was devastated," Amanda says. His biggest concern was not being able to eat the food he loved like strombolis, donuts and fast food.

"It was so tough for him because he was older and understood how things would change for him," Amanda says. "I promised him we'd find a gluten-free version of everything he loved and, for the most part, I have."

After Shane's last weekend of eating all his favorite gluten foods, Amanda says the family went to a "100-percent gluten-free kitchen."

They bought all new pots and pans, a toaster and air fryer; did a deep cleaning of every cupboard, pantry and utensil area; and bought a second refrigerator so they could cook in bulk and freeze gluten-free meals. 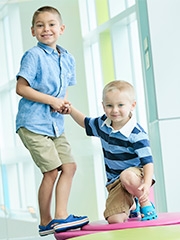 A year after Grant's diagnosis and six months after Shane's, things have settled down at home. Life for the family is still busy; the boys are both in school, the parents are working, and there are lots of activities to fill their nights and weekends.

"Sunday is my cooking day," Amanda says. "I have to know what we're going to eat and when. I'm constantly cutting up fresh fruits and vegetables for the boys to eat."

The family rarely eats out because they can't control if gluten is in or even touches the boys' food. When the boys are invited to birthday parties, they leave when the cake comes out. Amanda says that's the boys' choice: "They just don't feel comfortable eating grapes and carrots when the other kids are eating cake and pizza."

Grant, 4, is attending preschool. He's a bubbly, happy kid who enjoys reading, playing, bugging his brother, and making his parents look at his poop. (If it's yellow Amanda knows he's ingested gluten.) By removing gluten from his diet, Grant no longer has belly pain and can better focus on learning with his peers.

Shane, 6, is in first grade, where he has a 504-plan detailing his reaction to gluten and what staff must do to protect him. For example, staff need to clean the tables after lunch and Shane can't be offered any food. Now that Shane is eating gluten-free, his muscles are growing, his stamina is increasing, and his ice hockey skill are improving.

"They are both much better eaters today," Amanda says.

Both boys remain under Dr. Fahey's care at King of Prussia, where they also regularly see a pediatric pulmonologist to monitor their asthma. In many cases, doctors' appointments can be coordinated to minimize school and work interruptions.

Shane is also undergoing additional testing for food allergies. He has exhibited some symptoms of eosinophilic esophagitis (EoE), a chronic allergic inflammatory disease of the esophagus.

"I can't believe how much our lives have changed in the past year," Amanda says. "Learning one son — and then the other — had celiac disease was intimidating at first, but we received amazing support from Dr. Fahey and the team at CHOP."

“Not only did they diagnose the boys quickly, they've given us so many resources to help us navigate our way and put this disease in perspective.”

"At the end of the day, we've learned celiac disease isn't a death sentence — it's just a different way of eating," says Amanda.