For the first 10 years of his life, Lucas had limited use of his right hand. A brain bleed discovered a week after his birth injured parts of his brain that control movement on the right side of his body, and though Lucas regained mobility over the years, he was never able to rotate that wrist or fully extend his thumb. 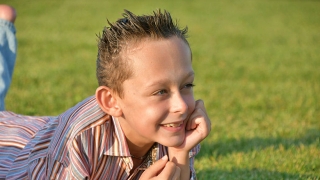 Lucas desperately wanted his hand “fixed,” his mother, Victoria, remembers. But that didn’t seem like a possibility until he came under the care of Apurva Shah, MD, MBA, a pediatric orthopaedic surgeon at Children's Hospital of Philadelphia (CHOP) who specializes in hand and upper extremity disorders. Dr. Shah evaluated Lucas and told him about a surgery that could give him fuller use of his hand.

“I turned to Lucas and asked, ‘What do you think?’” Victoria remembers. “He started crying and said, ‘Absolutely!’”

An early birth and years of therapy

Lucas was delivered by emergency c-section at just 27 weeks of gestation on Christmas Eve 2006. He was in the neonatal intensive care unit in a Philadelphia hospital where he was born when doctors discovered bleeding in his brain. It caused cerebral palsy with right hemiplegia — paralysis on the right side of his body.

Four brain surgeries and ongoing physical and occupational therapy helped him to strengthen and regain functionality in his right side. Lucas also wore a leg brace to help his mobility. As he grew, his mother encouraged him to be physically active, enrolling him in swimming lessons, horseback riding and sled hockey.

Lucas continued to improve, but his right thumb stayed tucked into his palm and his right wrist and forearm remained in a pronated position, palm down. This caused difficulty using the arm to feed or groom himself and he wasn’t able to use it to pick up or carry objects. He was also self-conscious about the way his hand looked, his mother says.

Lucas was just shy of his 10th birthday when his mother brought him to CHOP’s Specialty Care Center at Virtua in Voorhees, NJ, to be fitted for a new custom hand and wrist splint. Meagan Pehnke, MS, OTR/L, evaluated Lucas, then asked if the family had considered surgery to correct his forearm and thumb position so he could use the arm more easily with everyday tasks.

When Victoria said she was told by other medical professionals that Lucas wasn’t a candidate for surgery, Meagan recommended the family get a second opinion from Dr. Shah.

Dr. Shah evaluated Lucas at CHOP’s Voorhees location, and described a surgery in which he would reroute the pronator teres tendon in Lucas’ right forearm. In its usual position, the tendon rotates the palm down. Rerouted, it would act as a muscle to help him rotate his palm up. He also recommended deepening the space between Lucas’s thumb and index finger and rerouting a muscle in his thumb. This would allow Lucas to extend his thumb and more easily pick up and hold objects.

The surgery was scheduled for April — nine weeks before the family was due to leave for a long-planned African safari. Dr. Shah assured Victoria that Lucas would be cleared in time for international travel.

The surgery was successful and Lucas wore a cast for five weeks. Once the cast was removed, he started intensive occupational therapy with Meagan and was fitted for a custom splint. The splint came off just before the family left for their trip.

“They managed to get us into surgery in time, get the cast off, get him in therapy, and be able to leave the country,” Victoria says. “I can’t say enough about the teamwork that went on with this group.” 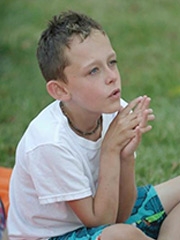 Lucas is still learning to use his right hand. It takes daily practice and exercise to build its strength, he has found. But his mom noticed that her son has gained confidence since the surgery. He’s no longer afraid to fall while skating and his hand looks like everybody else’s now. His mom has noticed something else about her son: He sits with his hands folded, something that wasn’t possible before the surgery.

“That’s his natural sitting position now. He has his hands folded at all times,” she says. “Little things like that are earth shattering for a parent — that he can look like everyone else.”