The pregnancy was going well for Lorraine Kelly and her husband Sean, of Collegeville, PA. Then happiness turned to shock when they received the results of Lorraine's routine five-month ultrasound.

"My obstetrician noticed a lump on the baby's neck. He sent us to a local hospital and they quickly referred us to the Center for Fetal Diagnosis and Treatment at Children's Hospital of Philadelphia (CHOP) for further testing," says Lorraine.

The Kellys headed to Philadelphia for an evaluation, where their unborn baby girl was diagnosed with a cervical teratoma, a type of giant neck mass, on her trachea.

"I was shocked and upset," Lorraine recalls. "We had never heard of anything like it. All my friends and family members were having normal pregnancies. It was so hard to understand what went wrong." 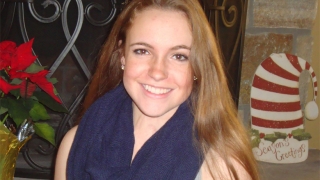 Emily at Christmas 2013, age 15. Scientists don't yet understand why giant neck masses develop on a fetus' airway, but the masses are not considered to be genetic. They are, however, serious conditions that can result in complications ranging from breathing or eating difficulties after birth to polyhydramnios, a buildup of amniotic fluid in the womb.

In addition to obstructing the airway, giant neck masses can compress the esophagus, preventing the fetus from normally swallowing amniotic fluid in the womb. This can result in a dangerous buildup of fluid and early labor. The giant neck mass also can compress the trachea, making it soft. A temporary tracheostomy — a surgical opening in the trachea — is sometimes necessary to allow the baby to breathe normally until the trachea hardens.

"Despite all our fears, the people at CHOP gave us hope," says Lorraine. "They were so supportive and walked us through everything that would happen, from the birth to caring for her afterward."

On June 1, 1998, baby Emily was born via EXIT procedure to help stabilize her airway during the birth. EXIT, which stands for "ex utero intrapartum therapy," allows the baby to be partially delivered through a C-section while still attached to the placenta via the umbilical cord. The surgeon then works to establish an airway to permit the baby to breathe.

After the tumor on Emily's airway was removed and a tracheostomy was performed to allow her to breathe, she was taken to the Newborn/Infant Intensive Care Unit (N/IICU). She remained there for four months — through Mother's Day and Father's Day — until she was transferred to Children's Seashore House. She stayed there for four weeks, where the medical team taught her parents how to take care of her when she went home

"The staff at CHOP was great," says Lorraine. "In the circumstances, I wouldn't want to be anywhere else. They took such good care of us — it's where you want to be if there is a serious medical problem."

Caring for Emily at home

Home care was overwhelming at first, Lorraine recalls. Emily needed help with both breathing and eating.

"She was used to being fed by a tube in her belly and had the tracheostomy. We did have around-the-clock home nursing, but it was scary at first."

When the tumor was removed, Emily's thyroid also was removed. "She will have to be on meds her whole life," adds Lorraine.

Emily couldn't speak because of the tracheostomy, which was finally removed when she was 4 years old. But speech and occupational therapy went well for her.

"To Emily, it was all normal," explains Lorraine. "There is some paralysis of the vocal cords, but she speaks well. Her voice is just a little deeper."

"The main thing I remember from CHOP is that everyone is so nice and welcoming," adds Emily. "They make you feel like you’re at home and in the best care."

"I never let this define me"

Now a junior in the College of Public Health at Temple University, Emily is busy pursuing a degree in Health Information Management, and says CHOP would be her dream place to work. In her free time, she enjoys hanging out with family and friends and taking day trips to the beach every chance she gets.

"I never really let this 'define' me or set me back from anything," she says. "I barely even remember that I have a big scar on my neck. Kids would ask what was wrong when I was younger but no one even says anything about it anymore. You can see my feeding tube scar and I joke that it’s a second belly button, but I still forget that it’s even there. It’s just a part of me and don’t let it bother me at all."

Lorraine counsels others who may have a similar diagnosis to never give up hope. "The team at The Children's Hospital of Philadelphia is the reason my husband was able to hold Emily for the first time — on Father's Day." 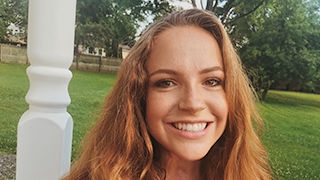 Emily rarely needs to return to the hospital for follow-up visits anymore, but she stays connected by volunteering and attending the Fetal Family Reunion. After doing so well for so long, she no longer needs to see Howard Panitch, MD, her pulmonologist. Because she has no thyroid, Emily continues to see Vaneeta Bamba, MD, for endocrinology appointments at CHOP's Specialty Care & Surgery Center in King of Prussia to monitor her thyroid hormone levels replaced by medication.

Otherwise, the active young woman is enjoying every moment of her college years in Philadelphia (especially her beloved Eagles Super Bowl win!) and thinking about summer internships.

"I want to show kids that you can still have a normal life and you can do anything you set your mind to!"