Published on Jun 04, 2018 in Neonatology Update

From the moment he was born and doctors jump-started his life with chest compressions, Charlie has needed help breathing. During his first two months of life, doctors treated him with breathing tubes, specialty ventilators, steroids and blood transfusions, but despite their efforts, the tiny baby did not get better.

Looking for answers, Charlie’s parents, Kristen and Paul, turned to the Newborn and Infant Chronic Lung Disease Program at Children’s Hospital of Philadelphia (CHOP). With the program’s specialized care and coordinated approach to treatment of babies with lung disease, Charlie got stronger. At 6 months, he was able to go home for the very first time.

Kristen was 25 weeks pregnant when her water broke. She was admitted to her local hospital on Long Island, NY, and seven weeks later, delivered Charlie via cesarean section. He was immediately intubated and transferred to the hospital’s neonatal intensive care unit (NICU).

Despite the wonderful care the nurses and doctors provided to Charlie at his local hospital, Charlie developed chronic lung disease (CLD) and pulmonary hypertension. Over time, it became apparent to Kristen and Paul that their son’s health was not going to get better in a short period of time.

The couple investigated hospitals with expertise in treating babies with chronic lung disease like Charlie, including CHOP. They traveled three hours to Philadelphia to meet with Huayan Zhang, MD, Director of CHOP’s Newborn and Infant Chronic Lung Disease Program (NeoCLD Program), one of the largest programs of its kind. There, they learned more about the multidisciplinary team who would care for Charlie, as well as the program’s ongoing research efforts seeking to improve outcomes and treatments for children with CLD.

They started the paperwork to transfer their son to Dr. Zhang’s care the moment they returned to New York.

“We felt she had the best handle on how to help Charlie and how to get him whatever he needed so we could move him home and onto the next phase of the journey,” Kristen remembers.

Expert medical care for Charlie, support for the whole family 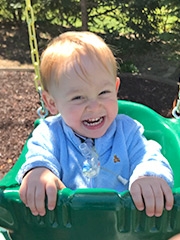 After being transferred to CHOP’s Newborn/Infant Intensive Care Unit (N/IICU), a detailed evaluation revealed that Charlie’s body and his lungs were failing to grow. He was diagnosed with severe chronic lung disease, also called bronchopulmonary dysplasia (BPD), gastroesophageal reflux and airway malacia.

“He was falling behind in terms of weight, length and head circumference,” says Zhang. “Overall his whole body wasn’t growing. He didn’t have energy for anything but breathing.”

Charlie’s care team recommended a tracheostomy for long-term ventilator support, a gastrostomy tube (g-tube) to deliver adequate nutrition into his stomach, and a Nissen fundoplication, which is a surgical procedure to address reflux.

“This is a multisystem problem,” says Zhang. “Therefore, you really need a wide range of specialists to help treat this condition. It’s the experience of the team and subspecialty consultants and the comprehensive management that makes the difference.”

Kristen and Charlie’s then 2 1/2 -year-old sister, Abery, temporarily relocated to Philadelphia. Children weren’t allowed in the NICU back home, so Abery got to meet her baby brother for the first time while at CHOP. The team’s social worker and child life specialist helped make the relocation easier and worked with Abery to make sure she was comfortable with the Hospital setting. And just to make things a little easier for Abery, her grandfather outfitted one of her dolls with a tiny trach, just like Charlie’s.

“Our program is unique in that we have the resources to support not only the medical needs of the baby, but also the psychological needs of the baby and the family,” says Kathleen A. Gibbs, MD, Medical Director of the NeoCLD Program. “It’s just an incredibly cohesive multidisciplinary team that approaches the care of these infants.”

Charlie’s surgeries at 3 months old were a turning point, his mother says. With the trach, g-tube and Nissen fundoplication, Charlie steadily put on weight and grew stronger.

A month later, he was transferred from the N/IICU to the Progressive Care Unit (PCU). There, Kristen and Paul were trained in trach and vent care. Finally, at 6 months old, Charlie went home.

That was over a year ago. Today, Charlie is an active 21-month-old. He has made so much progress that he now only needs his ventilator during the day while napping, and at night while sleeping. Although he still has nighttime feedings through the g-tube to prevent weight loss in the event he gets sick, he eats by mouth very well. At 23 pounds, Charlie’s weight is average for his age.

During the day, Charlie is often on the go. “The second he opens his eyes he wants to play,” Kristen says. 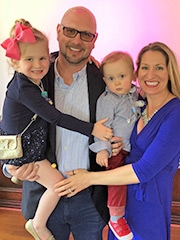 He loves to climb stairs and has just mastered walking. He practices his new skill by taking laps around the house and playing outside on the playground.

The next chapter for Charlie

Charlie returns to CHOP for specialty follow-up appointments with pulmonary and ENT. Right now, the hope is that he will be liberated from tracheostomy by next spring.

“The good news about most babies with BPD is with time, growth, and support of their physiologic needs, they can outgrow it,” says Gibbs. “They can run on the playground. They can play on the baseball team. They can go swimming in the ocean. They might get sicker with coughs and colds, particularly in the first few years, but by and large they actually are going to be OK.”

Throughout their journey, the family has adopted a slogan that Kristen had hanging in the Hospital room: “Every day in every way, I get better, better, and better.”

When reflecting back on how far Charlie has come, Kristen has this to say: “We are 100 percent confident that bringing Charlie to CHOP was the best decision for not only him but also our family. He didn’t just receive the medical care needed at the moment, but Dr. Zhang and the team helped guide us in the care befitting Charlie and our family’s future. They go above and beyond to lead each family onto their own path of success.”