After having surgery at 5 months to repair several heart defects, Paisley developed leaks in her lymphatic system and was on a ventilator for weeks. An innovative interventional procedure at the Center for Lymphatic Imaging and Interventions stopped the leaks and restored her health.

In the weeks leading up to Paisley’s birth, several physicians told her parents, Shauna and Jay, that her chances of surviving were very low. A prenatal ultrasound had shown that her heart had a single upper chamber, where there should be two, and the arteries feeding into the heart were in the wrong places. The images also showed other anatomical anomalies, the most worrisome of which was an unusually small chest cavity. Paisley was diagnosed with a complete atrioventricular canal (CAVC) defect.

A poor outlook before birth

Shauna and Jay traveled from their home in southeastern Alabama for multiple second opinions. “None of the doctors were optimistic,” remembers Shauna. “They didn’t expect her lungs to develop in such a small area. They used language like ‘if she makes it.’”

Shauna took the images and information to a doctor who is a good friend. “I asked him to explain the reports to us in language we could understand,” says Shauna. “He told us, ‘These are unsurvivable conditions.’”

Shauna made plans to deliver at a hospital in Birmingham where pediatric heart and lung specialists would be on hand to provide emergency care for her baby. She and Jay prepared for the worst.

“She was totally fine”

Paisley surprised everyone. “She appeared to be totally fine,” says Shauna. “She didn’t need oxygen or any type of assistance. They put her in the intensive care unit and people would ask us, ‘Why are you in here?’ We took her home after six days.”

Paisley was relatively healthy during her first few weeks at home. Her parents were told she would eventually need heart surgery, but that it could wait. The chances of the surgery’s success would improve as her heart grew bigger. Shauna and Jay monitored the oxygen levels in Paisley’s blood and brought her to see her pediatrician for regular checkups. They were watching for signs that the surgery was needed.

Those signs began to emerge when Paisley was 4 months old. She stopped gaining weight, and her oxygen levels, which has been in the high 80s, dropped into the 70s.

Paisley returned to Birmingham for heart surgery when she was 5 months old. The procedure seemed to go well. But when the medical team tried to wean her from her ventilator, she crashed. Paisley ended up needing ventilator support for six weeks, and was fed through a nasogastric (NG) tube. “She was sedated,” says Shauna. “She would look at you and hold your hand, but she didn’t smile.”

Tests showed that Paisley’s problem was fluid build-up in her chest cavity, which was preventing her lungs from fully inflating. She had chylothorax, a condition in which fluid leaks from the lymphatic system and collects in the chest.

“Doctors recommended that we go to Children’s Hospital of Philadelphia.”

The Jill and Mark Fishman Center for Lymphatic Disorders has unique expertise in treating lymphatic leaks. The center’s team has treated hundreds of children and adults with lymphatic leaks and lymphatic flow disorders, making it the largest and most active treatment program of its kind in the world. The center is led by Yoav Dori, MD, PhD, a pediatric cardiologist at CHOP, who has pioneered a procedure to locate and plug the leaks in the lymphatic system.

The center uses dynamic contrast MR lymphangiography (DCMRL), an advanced imaging test, to confirm the location of the leaks. Doctors then perform a minimally invasive procedure to embolize the leaks — essentially sealing them with a special glue. With the leaks closed, the lymphatic system responds by opening up new or preexisting dormant pathways.

Shauna and Paisley flew from Birmingham to Philadelphia with a medical transport team on a Saturday. The following Monday, Dr. Dori did the lymphatic imaging and was able to stop the abnormal lymphatic flow that he identified on the MR lymphangiogram. 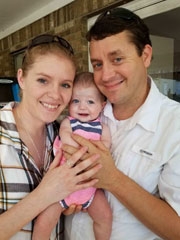 “She was smiling at us two days later,” says Shauna. When she saw that smile, Shauna knew they had turned the corner.

With the lymphatic leaks sealed and the fluids off her lungs, the medical team was able to finally successfully wean Paisley from the ventilator. She received supplemental oxygen through a nasal cannula for the next month. During the weeks she was sedated and ventilated, Paisley lost some motor skills, which she has had to relearn. She also needed to relearn how to swallow.

Now 11 months old, Paisley can hold her head up again, sit without support and eat baby food. She has grown into an active, busy child.

“She’s nothing but a miracle and answered prayers.”