Elise Miller loves to dance. At 6 years old, she has learned ballet, jazz and is now stepping and spinning her way through hip-hop classes. If her parents seem especially proud of their daughter, they can be forgiven; Elise spent the first eight months of her life in leg harnesses and casts.

Elise was born with developmental dysplasia of the left hip, a condition in which the femur slips easily out of the socket. Roughly 1 in 1,000 babies are born with hip dysplasia, with the condition more likely to occur in infants who, like Elise, were first-born females in a breech position.

The condition does not cause pain in childhood, but left untreated, may result in uneven leg lengths and pain in adulthood.

From harness to brace 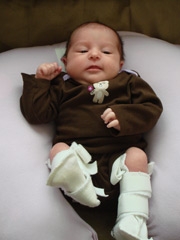 Elise was diagnosed through a simple roll of her hips during routine newborn screening. Her parents, Ashley and David, brought her to a local orthopedic specialist who fit the 4-day-old infant with a Pavlik harness, a device that gently positions the hips so they are securely in place. The harness is the most widely used initial treatment option for hip dysplasia throughout the world.

After three months in the Pavlik harness, Elise’s hip remained unstable. The orthopedist moved on to a second line of treatment — the more restrictive Rhino abduction brace.

Elise seemed uncomfortable in the abduction brace, her mother remembers. And after a month without improvement, the orthopedist recommended Elise be seen by Wudbhav N. Sankar, MD, of the Hip Disorders Program at Children’s Hospital in Philadelphia (CHOP).

An MRI at CHOP revealed the severity of the dysplasia. Dr. Sankar recommended a closed reduction procedure, in which he would manually manipulate the femoral head into the hip socket. Elise’s hip would then be immobilized with a custom molded body cast. Called a spica cast, it would be applied from her belly to her ankles. Elise would spend roughly 12 weeks in a cast.

Caring for an infant who wore a harness day and night was hard enough. The Millers didn’t know how they would manage with a cast that covered the lower half of their baby’s body. But they decided it was worth it to keep their daughter fully mobile and pain-free in adulthood.

“We were very worried about the procedure and the lifestyle change caring for her in that cast,” Ashley says. “But Dr. Sankar said if you don’t deal with it now she’ll be 30 or 40 and end up with hip problems and possibly need surgery. It would be harder for us to live through it now, but she won’t have a memory of it.”

From cast to cast 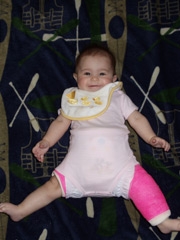 Elise was 5 months old at the time of the closed reduction. She emerged from the procedure with her usual cheerful disposition intact despite the bright purple cast that held her legs into a V-shape.

“She was so good. It didn’t really affect her. She didn’t cry, I didn’t notice her being any more cranky than any baby would be,” Ashley remembers.

Once home, Ashley and David found ways to adapt to the cast. Elise couldn’t sit up, so they propped her in a beanbag chair for play and interaction. She couldn’t fit into a highchair, so at mealtimes Elise straddled her mother who fed her while sitting on the couch with her legs propped up. Of all of the challenges the cast posed, keeping Elise clean during diaper changes was the most frustrating. In the beginning, Ashley and David would tuck a preemie-size diaper inside the cutout in the cast and wrap a larger diaper around the outside. Then they found it worked better for them to adhere an adult incontinence pad inside the cutout and sealing the area with waterproof tape.

After six weeks in the cast, Elise graduated to a version that covered only her left leg. The family had traveled back to the Hip Disorders Program at CHOP for the cast change, and when Elise woke up from anesthesia, she “had such joy” at being able to stretch her right leg, her mother remembers. “She had one leg free and she kept bending it back and forth, back and forth,” she says.

Another six weeks went by before the second cast was removed. By then, Elise was 8 months old. Her parents had been afraid she would need physical therapy to reach certain developmental milestones like crawling, but as soon as Elise had both legs free, she hit the ground and scooted away.

Elise had to wear a harness at bedtime and during naps to protect her hip, but only until she decided herself that she no longer needed it, Dr. Sankar told the Millers. That time came one morning shortly before Elise turned 2; Ashley walked into her daughter’s bedroom and found the harness lying on the floor next to the crib.

“She undid the Velcro and threw it out of the crib,” Ashley remembers. 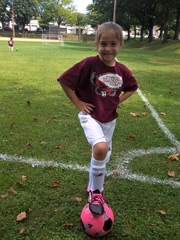 Today, Elise plays soccer and baseball and, of course, dances. It was at a checkup the month before Elise’s fourth birthday that the Millers got the good news. Dr. Sankar told them that Elise’s hip had stabilized so completely that he had to consult his notes to be sure which one had been displaced. The family celebrated with ice cream in the CHOP cafeteria, drove home and fulfilled their promise to Elise: They signed her up for dance lessons.