Lamont, 13, was born hard of hearing and has lost hearing in one ear as he’s grown. That hasn’t stopped him from doing anything he wants — including building a nascent career as an actor and model. 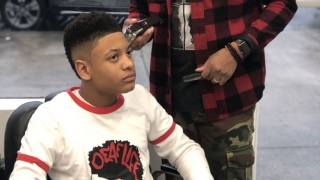 Things didn’t always look so rosy. Lamont’s mother, Michele, had experienced miscarriages in the past, and her pregnancy with Lamont was difficult. She was put on bed rest. In her 27th week of pregnancy, Lamont was born.

Remarkably, for being born so early, he was completely healthy. But the newborn hearing screen indicated he had some hearing loss, and he was referred for additional testing. He and Michele would soon face another blow: The day Lamont turned 3 months old, his father died unexpectedly.

“I felt so lost,” Michele recalls. “We don’t have any deaf people in our family. I’m a young mother and I just lost my husband. I didn’t know what to do. But I had the best NICU nurses and they told me: ‘Just make all the appointments at CHOP. They’ll take care of you.’ And they did.”

Testing showed that Lamont had moderate hearing loss in one ear and severe in the other — likely a result of prematurity. He began wearing hearing aids soon after. With the hearing aids, he could hear voices and background noise.

He received early intervention services through the Pennsylvania School for the Deaf (PSD) as well as audiology and speech therapy at CHOP’s Center for Childhood Communication. Lamont is fluent in American Sign Language and can speech read (commonly known as lip reading), but he communicates verbally and has been going to a mainstream school starting in kindergarten.

“His language is so clear. People are amazed he’s deaf,” Michele says.

For the next several years, Lamont progressed like any other child: making friends, going to school, enjoying music and sports. Being hard of hearing never held him back. He even did some local modeling, as well as appearing in some commercials and Sprout Network’s The Chica Show.

“I tell my son all the time, ‘You don’t even realize what you’ve been through and how awesome you are,’” Michele says with obvious pride. “These deaf kids are amazing. I walk through the Buerger Center and see how well they are all doing, and I am blown away.”

Last summer, Lamont told Michele there was something wrong with one of his hearing aids. They made an appointment with Audiology and soon, Michele realized there was a bigger problem.

“I was in the booth with him, and I could hear the chimes, and he was not,” she says. “They stopped the session, and I was already crying because I knew what was coming next.” The audiologist confirmed that the hearing in one of Lamont’s ears had lessened. He was now a candidate for a cochlear implant (CI).

CHOP was able to quickly schedule Lamont for implantation with John A. Germiller, MD, PhD. It was not a decision either Michele or Lamont struggled with. “I didn’t want him to miss out on anything. It was his decision, though,” Michele says.

For his part, Lamont had normal concerns about surgery, but knew the benefits would be worth it. “I felt sad at first when I lost the hearing in that ear,” he says. “I worried a little about the surgery. But I told my mom that I wanted a CI to hear better.” He opted to go bimodal — using one hearing aid and one cochlear implant.

Lamont’s surgery went well, and he recovered quickly. As is often the case, he said some sounds were slightly robotic at first and his mom’s voice sounded “like an alien.” But with time to adjust to the new device, he says the cochlear implant has given him improved access to sound compared to his hearing aid.

“The hearing aid helped, but the CI was clearer,” he explains, adding that it is particularly helpful when he’s listening to music.

Michele also noticed the improvement. She says that not long after the cochlear implant surgery, Lamont’s hearing aid malfunctioned and he was able to successfully rely solely on the new cochlear implant while the aid was replaced. “He can hear much more than he used to,” she says. “Now he hears higher and lower frequencies that he was never able to access before.”

Lamont has a great support system and is thriving. He wanted to make sure other deaf and hard-of-hearing kids felt equally supported. So about two years ago, he and his extended family designed and produced a series of shirts celebrating what he calls “Deaf Life.”

The idea started small. Michele wanted to do something to celebrate how far Lamont had come and was toying around with some ideas for a shirt for him; Lamont had a slightly different idea. “He has always been the person who will go over to another child and help them,” Michele says. “He told me: ‘I want my deaf friends to be proud of who they are.’”

Soon, the single shirt had become a family project, and the designs expanded to include ASL graphics. “It was important to me to inspire other deaf kids and support them,” Lamont says. “I wanted to make sure they know they are important and we’re all the same no matter what challenges we’re dealing with.”

The shirts were sold through friends and local businesses. It was a true community effort, including his neighborhood’s landmark barbershop featuring Lamont wearing one of his designs on their Instagram page. All told, the shirts brought in about $700, some of which Michele donated to PSD. Down the road, they plan to produce more shirts and possibly add other clothing and accessories to the line.

Clearly, Lamont and his supportive family get a lot of credit for how well he’s doing, but Michele also cites the importance of his team at the Center for Childhood Communication, especially Dr. Germiller, and his audiologists, Carmen Hayman, AuD, CCC-A, who monitors his cochlear implant, and Rebecca Miller, AuD, CCC-A, whom he sees for his hearing aid.

“When he was diagnosed, I never expected this outcome at all,” Michele says. “I didn’t even understand the levels of deafness. I thought it would be a lot harder honestly. It’s been a work in progress, but I am so grateful for everyone who has been so hands-on involved with my son. Given all the stuff I’ve dealt with, I can’t imagine where I’d be if I didn’t have them to help.”