Kellie and Michael Feehan have a parenting philosophy for their 6-year-old son Connor, who has Cornelia de Lange Syndrome. “We don’t put him in a box,” says Kellie. “We expect him to do everything a typical kid would do, and if he has trouble, we adjust.”

Connor has Cornelia de Lange syndrome (CdLS), a genetic condition that affects multiple organ systems. He is treated by Ian Krantz, MD, medical director of the Center for Cornelia de Lange Syndrome and Related Diagnoses at The Children’s Hospital of Philadelphia. 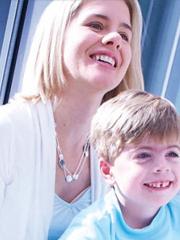 “He has needs that aren’t typical of other kids, and we get him the help he needs,” Kellie says. “He’ll discover his limitations at some point. But because he’s pretty mildly affected, we’d be foolish to limit his potential. We don’t know any other way to parent.”

Three days a week, Connor attends First Step Preschool at The Arc of Chester County. On the two other weekdays he attends a mainstream preschool near his home in Chester Springs, PA.

“He loves school now, but it has been a struggle because he has started to show some social anxiety,” Kellie says. “He’s doing pretty well, which is awesome.”

His parents plan to send him to kindergarten — and beyond — in their local school district.

“Our hope is for him to be in the typical classroom and have him pulled out [for special education] as needed,” Kellie says.

Because Connor doesn’t have the more classic CdLS physical features, his diagnosis was late in coming. He had severe feeding issues as an infant. He was finally diagnosed with gastroesophageal reflux disease (GERD) at 6 months old, but he still wasn’t eating well or growing. At 11 months, his pediatrician referred the family to CHOP for a genetic workup.

“When they told us he had Cornelia de Lange syndrome, we had never heard of it,” Kellie says.

His GERD is controlled with daily doses of Prevacid. “While he’s been a terrible eater most of his life, in the last year he’s begun to eat better,” Kellie says. “We still deal with some behavioral issues at mealtime.”

To further complicate eating, Connor is allergic to milk, eggs, cashews and mustard, and would be happy to exist on his favorite foods — meatloaf and Oreos.

After years of therapy, Connor’s speech has improved greatly, although his articulation decreases when he talks faster. Like many children with CdLS, he has behavioral issues.

“It can be tough at times. He has a hard time focusing, and he can get really frustrated,” Kellie says. “We’re working on it; there’s progress.”

With help from Dr. Krantz, the CdLS team and other CHOP specialists, the Feehans are optimistic about Connor’s future.

“We feel very lucky to live so close to CHOP; we’ve met people who come to the clinic from states away,” Kellie says. “We would have a hard time making a move away from this area.”