In Dec. 2020, Johanna and Alexander received news all parents fear. Their two-year-old son Elias had suffered a syncope caused by his severe pulmonary hypertension — high blood pressure in the arteries of the lungs — and had been rushed to the nearest New York emergency room. With standard treatments failing and Elias rapidly deteriorating, doctors placed the toddler on ECMO (extracorporeal membrane oxygenation), an advanced life support technique, which can support heart and lung function while doctors treat a patient’s underlying condition. Elias was so sick, however, that he could not be taken off ECMO. Elias’ doctors told his parents they were out of options. 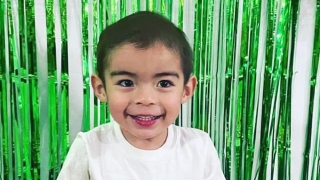 In Philadelphia, the Cardiac Center at Children’s Hospital of Philadelphia (CHOP) received a call from Elias’ New York doctors. Elias had been followed by CHOP since shortly after birth, when he was diagnosed with and treated for generalized arterial calcification of infancy (GACI), a rare disease that blocks arteries throughout the body, impairing blood flow to the heart and brain. Knowing the team at CHOP was already familiar with Elias’ case, the New York medical team requested Elias be transferred to CHOP for care.

“They told us CHOP was the best place we could take our son,” remembers Johanna.

Upon receiving this request, Katsuhide Maeda, MD, PhD, Director of Mechanical Circulatory Support and ECMO at CHOP, consulted with the ICU and pulmonary hypertension teams to review Elias’ case. Though Elias’ prognosis appeared bleak and transport on ECMO would be dangerous, Dr. Maeda agreed to the transfer. “The patient was going to die if he couldn’t come off ECMO,” says Dr. Maeda. “The last thing I could offer was a risky and challenging procedure called Potts shunt.”

An old procedure with new promise

Potts shunt is an older surgical procedure recently revitalized in the treatment of severe pulmonary hypertension (PH). In patients with PH, the pulmonary arteries shrink, making the right side of the heart work harder as it makes the higher pressure needed to force blood through narrowed arteries. This can lead to right heart failure. By connecting the pulmonary artery to the descending aorta, the Potts shunt creates a “pop-off valve,” relieving pressure for the right ventricle and protecting its function.

In patients like Elias, who have failed PH medical therapy and have limited treatment options, a successful Potts shunt can delay or eliminate the need for a future lung transplant. According to the most widely available medical literature, however, Potts shunt is too risky to perform on patients on ECMO, who are considered too sick for surgery and far less likely to survive.

Despite these risks, Dr. Maeda knew the Potts shunt was Elias’ best chance. For Johanna, Dr. Maeda’s confidence inspired hope she and her husband desperately needed. “He explained the procedure to us, how long it would take and why he felt it would work,” Johanna recalls. “He was very humble and down-to-earth; he put himself in our shoes. It was like God sending us an angel to tell us everything was going to be alright.”

On ECMO, Elias was transferred to CHOP for the procedure. Johanna, her husband and family at home waited anxiously throughout what Johanna would call “the longest five hours of [their] lives.”

Though a Potts shunt is typically performed by first creating an incision in the left side of the chest (left thoracotomy), Dr. Maeda felt entering through the midline (median sternotomy) might result in a better outcome. “It is very important to keep the lung conditions healthy, and left chest entry always causes some damage to the lungs,” he says. Because he was on ECMO, Elias’ lungs were already vulnerable. While a median sternotomy would technically be more challenging, a midline entry would avoid further compromising Elias’s fragile lungs.

Elias was able to come off ECMO after surgery, but Dr. Maeda chose to keep the cannula (a large plastic tube that provides access into the heart) in. In the event of an emergency, Elias could swiftly be placed back on ECMO.

“He came out of surgery not on the ECMO machine,” says Johanna. “Nothing that could have gone wrong did.” 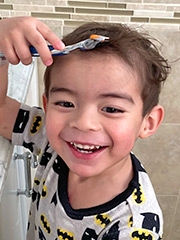 It took some time to stabilize Elias post-surgery, and he spent nearly six weeks in CHOP’s ICU, where he was slowly weaned off of the heavy sedation necessary while on ECMO, and his body began to function on its own. In the Cardiac Care Unit where Elias continued to heal, he also received occupational and physical therapies from the team Johanna says he loved spending time with. In Feb. 2021, after over two months at CHOP, Elias was finally able to return home, making his one of the very rare cases of a successful Potts shunt while on ECMO.

Now 3, Elias is a happy, rambunctious child who keeps his parents on their toes by scaling the couch and chasing the family’s dogs. He remains on PH medication and will return to CHOP for regular follow-ups. For Johanna and Alexander, this transformation is nothing short of miraculous. Johanna says:

“Dr. Maeda was an angel sent to heal our son.” 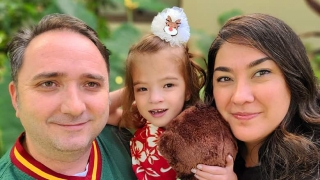 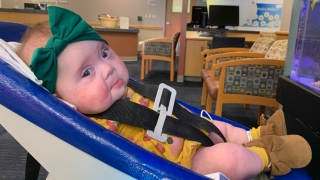 In the middle of the COVID-19 pandemic, one Va. family chose CHOP’s Cardiac Center for their daughter’s heart repair. Find out why. 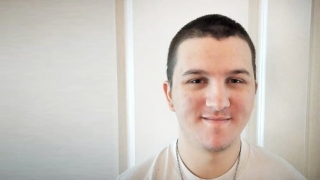