Wendy and Gavin Lindberg had seven years with their son Evan. He was their only child. For four of those years, Evan fought an incredibly brave battle with a highly aggressive cancer of the nerve tissue called neuroblastoma. When Evan was diagnosed, the cancer had already spread throughout his body. 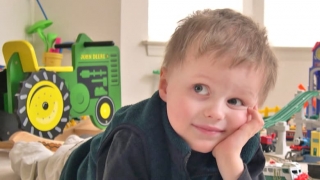 “Evan was pure joy,” says Wendy. “He was wise beyond his years, funny, compassionate and destined to do great things.” Evan endured multiple surgeries, more than 35 rounds of high-dose chemotherapy, multiple rounds of incredibly painful immunotherapy, weeks of intense radiation treatment to his brain, spine, abdomen and hip, and much, much more. Evan endured it all with quiet resolve that defined courage.

During their treatment journey, the Lindbergs came to Children's Hospital of Philadelphia (CHOP), where they met John M. Maris, MD, and Yael P. Mossé, MD, pediatric oncologists at the Cancer Center and leading neuroblastoma clinicians and researchers. Dr. Mosse had recently discovered that the growth of certain neuroblastoma tumors is fueled by a mutation in a gene called ALK. Evan’s tumor tested positive for the mutation. In early 2010, Evan was one of the first participants in a clinical trial launched by Dr. Mossé using a drug that targets ALK. It was the fifth experimental therapy Evan had received. Sadly, the therapy was not effective for Evan, and he passed away in October 2010.

Dr. Mossé's lab has remained committed to understanding why and under what circumstance the therapy works so other parents don’t experience the anguish of losing a child to neuroblastoma. And the Lindbergs became fiercely committed to funding such work, particularly in the face of limited grant opportunities from industry or government sources for a rare pediatric cancer like neuroblastoma.

To channel their efforts, the Lindbergs founded the Evan’s Victory Against Neuroblastoma Foundation (the EVAN Foundation) in 2011. Since its establishment, the foundation has funded more than $600,000 in neuroblastoma research at CHOP and other institutions. “We prioritize meritorious projects that are in need of a little extra support either to get started or continue,” explains Gavin.

In addition, the foundation has made a multi-year commitment to CHOP to help cultivate the next generation of neuroblastoma investigators. The Evan Lindberg Neuroblastoma Research Scholars Program supports exceptional early-career scientists in the Maris/Mosse lab who are dedicated to finding a cure for neuroblastoma.

Kristopher Bosse, MD, the second Evan Lindberg Neuroblastoma Research Scholar, has identified a new protein called GPC2 on the surface of neuroblastoma cells. GPC2 is a highly promising immunotherapeutic target, and CHOP has entered into partnerships to develop new therapies targeting this protein. “We are very excited about targeting GPC2 with both antibody-drug conjugates and CAR T cells, along with deciphering the important role of GPC2 in the growth of neuroblastomas,” says Dr. Bosse.

The other promising area the Lindbergs point to is Dr. Mossé's ongoing work using ALK inhibitors. “This breakthrough has given hope to families who otherwise would have none,” says Gavin. “We have proudly supported Yael’s work for several years, and we are excited about the promise that next-generation ALK inhibitors hold for the treatment of neuroblastoma.”

In addition to research at CHOP, Evan’s memory lives on through the EVAN Foundation Treats & Treasures Cart program on the inpatient oncology floor. Once a week, Child Life staff visit all 50 rooms with a customized cart packed full of toys, games, stuffed animals, books, candy and other fun items. Patients and families get to choose what they want at no cost. This program is nearing its two-year anniversary at CHOP and the feedback from families has been remarkable. “This is his favorite day of the week” and “this is the first time she has gotten out of bed all day” are two reactions from parents when asked about the cart.

Wendy and Gavin have dedicated the rest of their lives to honoring the memory of their son’s life.