When Rachel and Rob brought their 7-month-old baby boy to Children’s Hospital of Philadelphia (CHOP) for feeding issues and difficulty gaining weight, they had no idea it would launch a diagnostic odyssey that would take years to identify, wind up involving all three of their children and lead to the discovery of a gene not previously associated with a human genetic disease.

Today, the family is among just seven in the world to be diagnosed with ER Degradation Enhancing Alpha-Mannosidase Like Protein 3 congenital disorder of glycosylation (EDEM3-CDG), a newly recognized genetic condition. 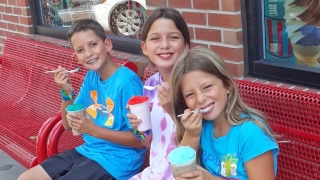 The family’s story began with the birth of their first child, Austin. As a baby, Austin experienced slow-but-steady growth in his first few months of life, but that quickly changed when he started solid foods. Instead of digesting the nutrients – particularly protein – Austin’s body quickly passed many of the nutrients directly into his waste.

A gastroenterologist suggested a feeding tube to ensure Austin received enough nutrients to grow, but the family managed to support his growth without tube feeds by working with a nutritionist and CHOP doctors. When Austin was 12 months old, the family met with Kevin J. Kelly, MD, a pediatric gastroenterologist at CHOP Specialty Care, Abington, part of Children’s Hospital of Philadelphia’s (CHOP) Care Network.

With support from Dr. Kelly and a nutritionist, Austin was receiving three times the typical amount of protein and calories needed for the average child – and he finally began to grow and develop once again. His parents, both in the medical field, worried their son would become dependent on a feeding tube long-term and worked hard to ensure he could continue eating by mouth. It took many months, but they were successful in helping Austin maintain growth.

By age 3, Austin was finally back on the typical growth chart for his age – albeit, still on the lower end for both height and weight. However, he continued to struggle with low motility – food was taking longer to process in his gastrointestinal (GI) system than normal – and he also had speech, language and learning delays.

When the couple’s second child, Savannah, was born, they worried she’d have the same feeding issues as her older brother. While she was also small compared to her peers, she did not struggle to grow and gain weight as her brother had. She did experience many of the same delays to her speech, language and learning.

Early intervention services began when Austin was a year old, and Savannah was 15 months old. Her needs were different than his – she ate well and her growth was progressing, but she struggled with learning. To help, she received physical, occupational and speech therapy. Dr. Kelly also recommended a genetics consult to determine if there was a genetic basis for the variety of symptoms the family described in their children.

““Dr. Kelly really listened to us and worked with us – year after year – to find new ways to support our children, even when we didn’t have many answers,” Rachel says. “He was the first to suggest the kids probably had a disorder we didn’t yet know about.””

The family also met with Elaine H. Zackai, MD, Director of Clinical Genetics at CHOP, who began genetic testing to see if the children had any genetic abnormalities associated with then-known disorders. When Austin was a year old, and again at age 5, clinicians found no disorders, but did not stop investigating.

When Rachel and Rob’s third child, Lillian, was born a few years later, the family and their doctors knew something was wrong right away. Lily struggled to breathe from her first night and needed to be constantly monitored while sleeping. Doctors determined she had sleep apnea, which stopped her breathing multiple times each night. By age 4, Lily outgrew this condition, but needed daily iron supplements to sustain storage levels of iron in her blood. Like her siblings, she also experienced speech, language and learning delays.

Without an identified disorder for their children’s symptoms, Rachel and Rob could only address individual issues as they occurred with each child. So, each child’s treatment was customized to what they needed and how their bodies reacted to certain interventions. For example, Austin needed more protein and calories because of his digestive challenges; while Savannah needed more social support, and Lily was identified with decreased iron and needed supplements to support her growth and development.

All three children have individualized educational plans (IEPs). Marianne M. Glanzman, MD, an attending physician in CHOP’s Division of Developmental and Behavioral Pediatrics, also supported the family by collaborating with health and education professionals to assist the children in meet their educational goals.

“We worked with the doctors to address each child’s individual needs,” Rob says. “We were fortunate to have the team at CHOP and locally that worked with us to help our kids.”

When Austin was 9 years old, the family got a call from Andrew C. Edmondson, MD, PhD, an attending physician with CHOP’s Division of Human Genetics, Metabolic Disease Program and the Congenital Disorders of Glycosylation (CDG) Clinic.

He asked them to consent to specialized biochemical testing for the entire family through CHOP’s Metabolic and Advanced Diagnostics lab, which is dedicated to the comprehensive diagnosis and disease management of patients with disorders resulting from inborn errors of metabolism. CHOP is a leader in the laboratory diagnosis of CDG worldwide. Dr. Edmondson helped connect the family with lab personnel to collect specimens for review and in-depth N-glycan analysis, a cutting-edge diagnostic tool to define novel defects in N-linked protein glycosylation.

Are you a provider shipping a sample to CHOP?

CDG is a very large group of rare and under-diagnosed conditions. The clinical phenotype ranges from severe multisystem disease to mild and variable presentations like those detailed in Austin, Savannah and Lily’s story. CDG should be screened in all patients with undiagnosed conditions. Review our specimen requirements and fill out a metabolic laboratory requisition form.

Excited, yet anxious, the parents met with Dr. Edmondson who explained researchers discovered all three children shared a common congenital disorder of glycosylation (CDG), attributed for the first time to two faulty copies of the ER Degradation Enhancing Alpha-Mannosidase Like Protein 3 (EDEM3) gene.

The discovery explained the variety of symptoms each child had experienced including developmental and speech delays, mild facial abnormalities, along with individual symptoms including hyperactivity, attention deficit disorder, failure to thrive and sleep apnea.

“Ultimately, our faith in God has given us peace about their future. But knowing what it is and why our children have been having these difficulties has been life-changing,” Rachel says. “Dr. Edmondson has been caring and supportive throughout this process and really gave us a sense of what our kids needed to be successful – thankfully, we were already doing many of the things that were right for them, like getting extra help when needed.”

The family is also happy to be able to access the many resources of CHOP’s Congenital Disorders of Glycosylation Clinic, one of the few programs in the country dedicated to caring for children with CDG, close to their home in Montgomery County, PA.

The CDG Clinic is available to any patient – child or adult – who has been diagnosed with CDG or is suspected of having any form of the condition. If you believe your child may benefit from the CDG Clinic, talk to your physician about a referral, call us at 215-590-3376 or contact us online. 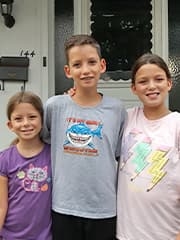 The EDEM3-CDG diagnosis has been comforting to the family.

“Knowledge is power and now we feel confident that while our children may learn differently than other children, they can learn and grow and be successful in their own ways,” Rachel says.

While the three siblings share a diagnosis, they are all unique individuals, their parents say.

Austin, now 12, loves video games, is an active Boy Scout, wrestles on a club team, and has a strong sense of justice and fairness. Savannah, 10, is the artist and performer of the group, always seeking to sing, dance or draw. Austin and Savannah are both active in CrossFit. Lily, 7, is strong-willed and determined; she loves to laugh and is always trying to do what her siblings are doing. The siblings share a love of playing the piano, doing puzzles together, going to church and playing games as a family.

“Our kids are amazing, and we let them know that all the time,” says Rob. “If they put their mind to it, they can do anything: have friends, do well in school, have careers they enjoy and become contributing members of society. We’re teaching them how to advocate for themselves – as we have and the team at CHOP has – so they can get what they need to be successful.”