When Leo was born prematurely in 2010, he had several medical complications, including a hole in his heart and an issue with the development of his urinary tract. His parents, Danielle and Tom, focused on the most pressing concern: the heart defect. 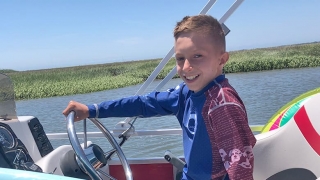 For three months, they worked tirelessly to avoid surgery. They took shifts every night feeding their son through an NG tube in the hopes he would gain weight. “It was such a difficult experience,” Tom recalls. But they eventually faced the fact that Leo wasn’t growing. “His heart was working so hard — it was as if he was riding a bike 24/7,” says Tom.

They considered different hospitals, but at Children's Hospital of Philadelphia (CHOP), “We were so impressed by the team approach,” explains Tom. When it came time for the procedure, cardiac surgeon J. William Gaynor, MD, also made an impression: “He met with us immediately before and immediately after the surgery,” says Tom. “I appreciated that more than I can say. It conveyed to me how important it was to him.” The surgery was successful, and Leo’s heart rate, which had been 120, became a normal 80.

Danielle and Tom then turned their attention to Leo’s other issues — in particular, the condition called hypospadias, in which the opening through which a boy urinates is not in the normal location. “It’s been such a complicated situation,” says Tom.

To relocate the urethra, Leo underwent two surgeries performed by Douglas Canning, MD, Chief of the Division of Urology, one of the top-ranked pediatric urology programs in the nation according to U.S. News & World Report. “Dr. Canning is the model of professionalism,” Tom says. “He holds himself to an exceptionally high standards, and he communicates clearly and with empathy.”

There were, however, complications. Every few months, Leo experienced extreme abdominal pain, possibly caused by urinary tract infections, and so was on antibiotics for several years. Last year, Dr. Canning performed a procedure to relocate the urethra to where it was at Leo’s birth, and as a result, the painful episodes have gone away.

“Our odyssey is not done,” explains Tom. Dr. Canning will next perform a diagnostic procedure to discern a different way to reconstruct the urinary tract and decide what steps to take. Tom points out that 10-year-old Leo “is now old enough to have a say and participates in our discussions about treatment.”

The family is extremely appreciative of the team approach at CHOP that initially impressed them: In conjunction with the urology procedure, Lisa M. Elden, MD, MSc, an attending surgeon in the Division of Otolaryngology (ear/nose/throat), will replace the ear tube Leo needs for his narrow right ear canal, meaning Leo will need to go under anesthesia only once.

Those procedures will take place at CHOP’s Specialty Care & Surgery Center in King of Prussia, “Which we’re thrilled about, because it’s just 10 minutes down the road,” says Tom. When CHOP’s new hospital in King of Prussia is completed, it will feature multiple advanced operating suites that will be configurable and flexible to meet the clinical needs of our expert surgeons. This hospital will greatly increase the number of families like Leo’s who will benefit from CHOP’s unparalleled, coordinated care.