Aliya, 36, spent three decades of her life managing her beta thalassemia, an inherited blood disorder. Then she learned that an experimental gene therapy for the condition was being tested, with Children's Hospital of Philadelphia (CHOP) as one of the trial sites. While she weighed the risks and logistics of being away from her family in Virginia for weeks, “So many things pointed me in this direction,” she says. She received the gene therapy in 2015, and its success, she says, “transformed my life.” 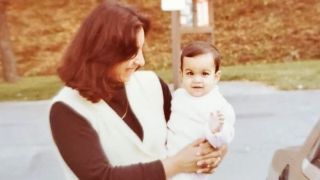 Aliya was eight months old when she was diagnosed with beta thalassemia, a disorder that affects the production of normal hemoglobin, a type of protein in red blood cells that carries oxygen to the tissues of the body. The condition is inherited when both parents are carriers. People with beta thalassemia require lifelong blood transfusions, which eventually cause iron to accumulate in the liver, spleen, heart and other organs. This iron build-up must be treated with medication.

Aliya’s early memories begin with the iron-reduction infusion therapy she had to undergo. “I remember being maybe 6 or 7 and the nightly infusions,” Aliya says. While there are now oral medications that reduce the amount of iron in a person’s body, at the time, “My parents had to stick a needle in my stomach.” Likewise, her monthly blood transfusions were just a regular fact of life. “I don’t remember crying or getting upset about them,” she says. “I had to do it, I got a day out of school, and I felt better afterward.”

As she got older, however, the treatments became more of a nuisance. “As a teen, I just wanted to hang out with my friends. In college, I wanted to do anything other than spend a day in the hospital,” she admits. “It wasn’t a priority, and it should have been, and it affected my health.”

When she was in college, the oral medication for iron reduction became available, freeing her from the pump she needed to be attached to all night long. She began being more mindful of her treatments, and after graduating and becoming a marketing professional, “All my employers were very understanding.” One day a month she would sit in a hospital and work while getting a blood transfusion.

After marrying her husband, Justin, in 2008, they settled in northern Virginia and had two kids, Kyran, now 9, and Ariana, 8. Every three-and-a-half weeks she went to a hematology outpatient clinic a mile from her house. “I loved the nurse who ran the clinic,” she explains. “But the doctor there was awful!”

Discovering that a curative therapy was being tested 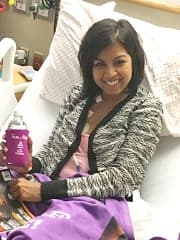 That awful doctor, however, in a way was the reason that Aliya learned of the experimental treatment that would cure her. In January 2015, the doctor called to say Aliya’s transfusion orders were expiring. He insisted on seeing her in person, but a snowstorm caused her to miss the appointment. She couldn’t get in to see the doctor, and therefore get her blood transfusion, for a week. Normal hemoglobin level is 12 to 15 grams per deciliter. The delay caused hers to drop to 5.5.

Furious, she logged onto a Facebook group for beta thalassemia in order to vent — but instead saw a link to an article about the first person to receive an experimental gene therapy for beta thalassemia. Her first thought was about the doctor: “I will never have to see this guy again!” she recalls thinking, with a laugh.

CHOP was the nearest site conducting the trial. She sent an email, and then began considering if she should go through with it. The treatment required first undergoing chemotherapy. “Who chooses to have chemotherapy?” she wondered. And the logistics of being away from her family for three months seemed daunting. 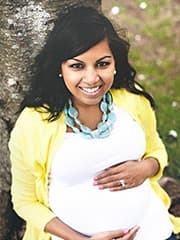 But there were many signs that she should go through with it. She was 30, the oldest cut-off age for the trial. Justin’s family was in Philadelphia, so she would have support and visitors. She thought about her children’s futures and the importance of staying healthy for them as she grew older. And then, in a made-for-TV moment, she opened a fortune cookie and saw this message: Your dearest wish will come true. “I always wanted to be cured,” she says, her voice cracking. So she enrolled in the trial and headed to CHOP.

“I love CHOP so much,” she says of her experience. “I’m a pro at going to the doctor — I’ve met so many doctors and nurses throughout my lifetime. I’ve never seen the quality of care, the knowledge and expertise — they’d have answers before I even finished the question.” She calls hematologist Janet Kwiatkowski, MD, MSCE, Director of CHOP’s Thalassemia Center, “one of the smartest people I’ve ever met.”

Five years after receiving the therapy, she thinks about how, when she was a baby, her parents were told she might not live to her 20s. No one could have predicted that, at 30, she’d have the option of a curative gene therapy.

“There aren’t words to adequately describe how it changed my life.”