Kadin and his twin brother Dhiren celebrated their first birthday with small smash cakes. While cake and icing were soon smeared across their happy faces, Kadin didn’t seem as interested in actually eating the cake as his brother was. 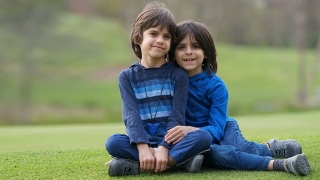 Dhiren (L) and Kadin (R) A month later, their mom, Staci, gave the boys English muffins with peanut butter for lunch. Within 15 minutes, Kadin's face became red and blotchy and he soon had a rash across his entire body.

Staci immediately called the family's pediatrician who told her to refrain from feeding Kadin peanut butter and give to the toddler Benadryl® (diphenhydramine). If his symptoms became worse – such as trouble breathing – she should immediately take him to the hospital. Some allergies can cause anaphylaxis, a severe and life-threatening reaction.

Thankfully, the Benadryl worked and Kadin's symptoms soon resolved. But the incident scared the family enough to get Kadin tested for possible food allergies. Their pediatrician referred them to the Food Allergy Center at Children's Hospital of Philadelphia (CHOP).

Kadin and his family met with an allergist at CHOP Specialty Care, Exton, where Kadin underwent skin and blood tests that revealed he was allergic to peanuts. The doctor said Kadin should avoid all contact with peanuts – at least for the time being. There was a chance Kadin could outgrow his allergy, or that treatment could become available.

Looking back at pictures from the twins’ first birthday, parents Staci and Gaurang could see Kadin’s face was slightly red and swollen. It now made sense why Kadin didn’t seem to enjoy eating the cake as much as his brother did.

As time went on, Kadin's IgE-mediated food allergies grew to include cashews, hazelnuts and almonds, as well as peanuts. To ensure Kadin wouldn't be accidently exposed, his parents removed all nuts and nut-containing products from their home.

"I was pretty neurotic about it," Staci says. "Kadin could have a reaction from almost any nut he was exposed to – not just eaten – and we didn’t want to take that risk."

As time passed and the family grew used to their new normal, Kadin continued regular allergy visits at CHOP. "Every time we visited, we asked what else we could do to protect him," says Gaurang.

The family was referred to the Oral Immunotherapy Program, a new clinical program at CHOP that offers innovative treatment options for children with one or more food allergies. CHOP had participated in multiple clinical trials and found oral immunotherapy was successful in 60 to 80 percent of participants. Kadin's parents were intrigued. 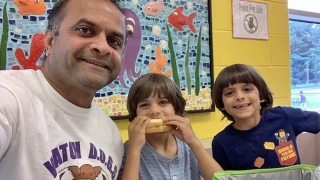 Oral immunotherapy, or OIT, helps desensitize children to the foods they are allergic to by giving them small quantities of the allergen every day, and gradually increasing the amount under medical supervision at the hospital. In many cases, daily ingestion of the allergen helps reduce the child's sensitivity to the food.

The goal of CHOP’s program is to help increase safety and reduce the risk of accidental exposures. The OIT team personalizes treatment to each family’s goals and interests (e.g. safe from cross-contamination or the ability to eat larger quantities of the allergen without a negative reaction).

“OIT offered the hope of a more normal life for Kadin. We knew we wanted to try.”

In the fall of 2019, when Kadin was 6 years old, he was evaluated by the OIT Program for possible treatment. After tests confirmed his current allergens – including peanut, cashew and hazelnut – the clinical team determined he could benefit from OIT.

In January 2020, Kadin began oral immunotherapy at CHOP's Buerger Center for Advanced Pediatric Care. Kadin ate a very small dose of peanut protein – mixed with apple sauce – under the supervision of medical personnel who could step in immediately if he had a bad reaction. Kadin was able to ingest the baseline dose without incident, and then ate the same amount at home for the next two weeks, under his parents' supervision.

Kadin was able to "up-dose" – increase the amount of peanut protein he consumed – twice before the COVID-19 pandemic hit, crippling the Philadelphia region in mid-March.

Kadin's family wondered if he'd be able to continue oral immunotherapy or if he'd have to stop and begin again when the pandemic was over. The clinical team in the OIT Program were also concerned about how the pandemic would affect Kadin and other children like him who'd begun OIT but had not yet built enough tolerance to successfully eat the food they were allergic to without triggering a negative reaction.

The OIT clinical team discussed options with Kadin's family. Together, they decided to continue oral immunotherapy at his current level – a ½ teaspoon of peanut protein daily – until he could safely increase the dosage under supervision at the hospital.

CHOP provided the family with supplies like protein powder used for OIT so his family could continue dosing and add it to his food each day. "I liked it in applesauce best, but yogurt was OK too," Kadin says.

From January to June, Kadin received OIT for peanuts only. In June, when the hospital resumed more normal activities, Kadin was able to safely increase his OIT for peanuts to 1 teaspoon of peanut protein each day, and begin OIT for cashew. In July, he began OIT for hazelnuts. Like with the peanut protein, the new oral immunotherapies were mixed in with foods Kadin already liked, and first administered at the hospital under medical supervision.

In September, Kadin successfully completed OIT for peanuts. In October, he completed OIT for cashew. He now eats one chocolate-covered cashew and one peanut M&M every day at breakfast – to maintain his desensitization. His family anticipates completing OIT for hazelnuts by the end of November. Then, Kadin will eat one peanut, cashew and hazelnut each day to reduce the chance of having a severe allergic reaction if he is accidently exposed to these nuts. “It’ll be his breakfast of champions,” Gaurang says. 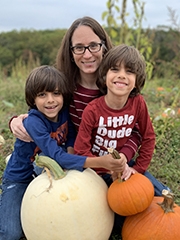 Staci, Gaurang and Kadin are already making plans for the successful completion of OIT.

"I'm looking forward to not worrying about every single thing around him," Gaurang says. Adds Staci: "He'll be able to enjoy more things – like eating in the cafeteria at school or playing team sports – and do it without as much anxiety."

Kadin has a different idea: "Maybe we can get the baker to make a huge cake in the shape of a giant peanut for my birthday!"

"We'll see," both parents respond. The family continues to be careful about what foods Kadin eats – especially at restaurants – and continues to carry epinephrine in case of an allergic reaction.

For now, 7-year-old Kadin is enjoying 2nd grade with his twin brother, playing Roblox and building with Legos. His favorite parts about school are recess and lunch, but admits to enjoying math. He hopes one day to become an engineer to help his dad "build stuff."

Talk with your allergist to see if your child may be a candidate for the Oral Immunotherapy Program at CHOP.

Breakthrough oral immunotherapy changed what Grace could safely eat and improved her life.

When Food Allergies Run in the Family