A painful and mysterious stomach ailment turned Madison’s life upside down, leaving the active, athletic 9-year-old so drained she couldn’t even take a shower without help. Today, thanks to expert testing and innovative treatment at Children's Hospital of Philadelphia (CHOP), Madison has successfully competed in a long-distance relay race. 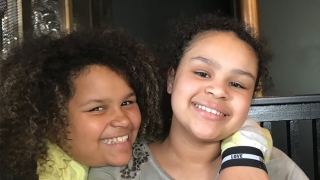 Melissa took Madison to the local emergency department, where doctors initially suspected a "bladder infection and sent her home with an antibiotic,” Melissa says.

When Madison's condition didn't improve after a few days, Melissa took her to a different emergency department, and then to a local gastroenterologist.

For the next six months, Melissa took Madison to numerous doctors trying to understand what was causing the pain and how to treat it. A series of mixed diagnoses and prescriptions failed to produce any improvement.

“My stomach was hurting,” Madison says. “It was frustrating that nobody could tell me why I was feeling that way.”

Chronic pain and anxiety took a toll on Madison. She was given medication for depression and anxiety. Unable to attend school, she was sent to a day program aimed at coping with these conditions.

“She declined to the point that I had to stand with her in the shower and remind her how to use the soap and shampoo,” says Melissa. “Her quality of life had just plummeted.”

Out of local options near their home in Washington DC, the family researched GI motility disorders and discovered the Suzi and Scott Lustgarten Center for GI Motility at CHOP.

The family scheduled an appointment for Madison to be evaluated at CHOP's GI Motility Center. David A. Piccoli, MD, and Bridget C. Godwin, MD, examined Madison and reviewed her medical history and previous test results. Then, they ordered a specialized test not widely available at pediatric facilities — a gastric emptying exam. For the test, Madison had to eat a small amount of scrambled eggs and bread. The food was marked with a substance that could be seen by the scanner as the food progressed through her digestive system.

The test was conclusive: Madison had gastroparesis, a condition in which the stomach empties very slowly, although there is no physical blockage, inflammatory disease or active infection causing the problem.

“She had a lot of pain,” notes Dr. Godwin. “At CHOP, gastroparesis is always on the list of differential diagnoses when a patient has that kind of pain, and the gastric emptying scan allows us to make the diagnosis. Madison had undergone a lot of tests elsewhere, but she’d never had that one.”

Melissa felt as if she and her daughter had finally been heard and taken seriously.

“They really listened during the examination,” Melissa says. “I think they were able to understand Madison’s answers to questions better than previous physicians had."

“I feel like the doctors at CHOP were more determined to figure out what was going on,” Madison agrees. “They did more tests, and they asked more questions.”

The road to healing

Treatment for gastroparesis varies from patient to patient. While some children can be successfully treated with diet and medication to stimulate the stomach muscles, this approach doesn’t work for all. It didn't work for Madison.

Madison's doctors decided she would benefit from a nasojejunal (NJ) tube, a type of feeding tube that goes in through the nose and is guided by interventional radiology to the digestive system. With an NJ tube, nutrients go directly to the small intestine — bypassing the stomach, where Madison's pain and symptoms were centered.

“I got stronger after that. I could run around again. ”

The NJ tube is often a temporary stopgap for gastroparesis treatment because the tube can easily become dislodged.

When Madison resumed her active lifestyle, which included playing with her dogs, Pearl and Chunky Brewster, the tube became dislodged repeatedly. After a few trips to the emergency department to reinsert her NJ tube, Madison and Melissa knew a longer-term solution was needed.

They discussed the possibility with Madison's care team at CHOP. Jennifer Webster, DO, suggested switching to a gastrojejunal (GJ) tube, which would allow nutrition to be delivered directly to Madison's small intestine, while also allowing gas and fluids in the stomach to be expelled. Because the tube is surgically implanted and anchored in the abdomen, it is more secure than a NJ tube.

Madison stayed at CHOP for about a week until surgery could be performed to implant the GJ tube. Melissa cites this time as one of several when the family appreciated CHOP’s multidisciplinary approach.

Child life specialists helped Madison establish a routine at the hospital and create a sense of normalcy during her stay, helping relieve pain and stress during an uncertain time. Madison remembers going to the Connelly Resource Center for Families, where CHOP maintains an extensive library of books and movies, and selected movies to watch with her mom.

Madison and her family also worked with a team of nutritionists, social workers, behavioral-health professionals and nurses to learn more about Madison’s condition, as well as how to properly use the new GJ tube and the tools associated with it.

The implantation of the GJ tube ushered in a sustained period of improvement in Madison’s health. With it, she was able to go horseback riding on her next birthday.

Recovering the pleasure of eating

Feeding through the GJ tube relieved Madison's symptoms, but she missed the taste of her favorite foods. When Dr. Webster asked her how she felt about trying to eat a little food by mouth again. Madison was happy to give it a try.

For the next several months, Madison began eating more food by mouth and received less nutrition through the GJ tube. Her gastroparesis symptoms did not resume. For some children with gastroparesis, a period of "gut rest" can reset their digestive track, allowing them to resume healthy eating habits without a repeat of painful symptoms.

When doctors felt confident Madison's gastroparesis symptoms had subsided and she could resume eating all her food by mouth, they removed the GJ tube.

Less than a year after the removal of her GJ tube, Madison learned her mother was recruiting friends for a long-distance relay race and decided she wanted to get involved. Madison spent months training for the race.

The Reebok Ragnar Great Midwest is a 204-mile trek though the Midwest. The route for the May 2019 event was divided into 36 legs and shared by teams of 12 people.

Madison, then 12, was the youngest of the thousands of competitors. She ran three legs of the race, completing a total of 17.8 miles.

After she joined her teammates for the last triumphant quarter-mile to the finish line, Madison and her mom enjoyed a celebratory “cake shake.”

“It's amazing — one year ago she had a feeding tube and now here she is today!” her mom wrote in an email to Dr. Webster.

“Without everyone's hard work and attention to detail who knows where she'd be?” 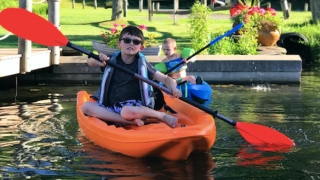 Care Evolved to Meet His Needs

After years of severe GI symptoms, Brayden found treatment and hope at CHOP.