When Nancy was pregnant with her first child, she and her husband Gary received frightening news: Their child was diagnosed with a rare congenital heart defect that could require immediate surgery after birth. But when baby Emily arrived, her parents were blindsided by something completely different: “The first introduction we got to Emily was, ‘What’s wrong with the baby’s face?’” 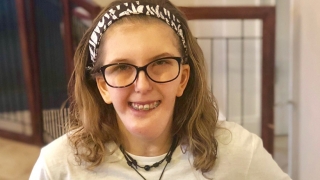 Emily was born with Goldenhar syndrome, a rare craniofacial condition with unknown cause. She was missing her entire lower jaw. She also had tetralogy of Fallot, a combination of four heart defects including a hole between the two bottom chambers.

The heart defect required one surgery. The craniofacial problems have required 30-plus surgeries — and counting — for Emily, who's now 14 years old. Through it all, she has tried to remain positive, keep fighting and teach kindness.

First, fixing the tetralogy of Fallot

When she was born, Emily was not able to swallow or suck. For feeding, she needed a nasogastric tube inserted through her nose to her stomach.

After three weeks in the New Jersey hospital where she was born, Emily was transferred to Children's Hospital of Philadelphia (CHOP). For the next six weeks, clinicians stabilized her until she was strong enough to go home. A week later, she returned to CHOP for open heart surgery.

“Heart surgery was one of the easiest things Emily has endured,” says Nancy. That’s the case even though the recovery process wasn’t easy. Months-old Emily needed to lie flat on her back for weeks to let her sternum heal. Afterward, she needed physical therapy to develop her core strength and muscle tone.

As Emily grew, clinicians determined she needed long-term nutritional support. That meant removing the nasogastric tube and replacing it with a gastrostomy tube, in which nutrients reach the stomach through a dedicated port in the abdomen.

During the next four years, Emily received feeding and speech therapy while her doctors and family developed a plan to create her jaw. It was a plan that would need many revisions.

Starting at age 5, Emily has had significant surgeries every year or two — most of which were performed at CHOP. Bilateral rib grafts were used to construct a jaw, but they grew crooked and became brittle. An attempt was made to salvage the jaw using a piece of hip bone, but that too failed and everything needed to be removed. Emily was back to square one.

Next, in two 12-hour procedures, pieces of the smaller bone in her lower legs were used to create a jaw. For months after surgery, Emily needed to crank extension rods to slowly expand the new jaw millimeters at a time.

The result? “She has a wonderful jaw,” says Nancy, “but then it became fused to her skull,” unable to open and close properly.

To address Emily's newest challenge, in 2014 surgeons operated through the top of her skull to reshape and unlock her jaw. The resulting 12-millimeter opening of her jaw is not wide enough to allow her to chew or speak well. While her parents floated the idea of leaving the jaw in this state, “Emily said, ‘No way,’” reports Nancy. “She wants to get it as good as possible.”

So, another major craniofacial surgery is on the horizon.

Beyond the extensive project of constructing her a jaw, Emily is also deaf in her right ear and received a cochlear implant. 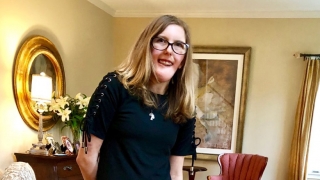 Understandably, this ordeal hasn’t been easy on a young girl. Emily has had periods of depression and panic attacks. But she’s rallied like a champion.

“She has such a fighting spirit,” says Nancy, with clear emotion in her voice. “No one’s going to tell her she can’t do anything.”

Emily’s biggest support? Her therapy dog, a labradoodle named Hank. “He is my best friend and helps me so much,” reports Emily. “Hank is the first thing I look for in the morning, and when I leave the house he is by my side for school, doctor appointments, therapies or anywhere else we go.”

Emily's father spent two years training Hank during the early-morning hours, and Emily’s role in the training process helped her feel more confident going into public places. “She would say, ‘I have to go to Trader Joe’s to train Hank to be in a store,’” notes Nancy.

“I have missed a lot of school with all the surgeries I have had,” Emily explains. “It is so hard to balance recovery, therapies and school at the same time.” But she has decided to help other kids learn to accept difference.

“My mission is to spread awareness about kindness and acceptance to kids of all ages by doing presentations live on-site, through video conferences and on social media," she says. "My favorite place to present is in elementary and middle schools, but I also do presentations to groups and clubs.”

Emily knows the secret to facing obstacles big and small: “My life has been full of challenges, but I have learned to just take it one day at a time.”