It was on the day of Mallory Weaver’s 20-week ultrasound that she and her husband, Jon, received news that would be devastating for any new parents to hear: Their son, Wade, might be born with holes in his heart. For children like Wade, this is one of the major symptoms present at birth indicating a rare, inherited genetic disease called Holt-Oram syndrome, estimated to affect 1 out of every 100,000 people. Wade was born with another telltale sign of the disease: hypoplasia, or underdevelopment, of the hands. It was this second condition that would become the main focus of Wade’s medical journey. 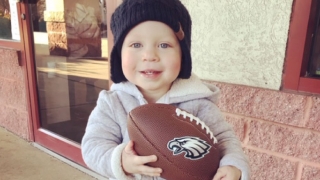 Holt-Oram syndrome typically results from a gene mutation that impacts embryonic development of the heart and upper extremities, often creating defects in the walls separating the chambers of the heart as well as abnormal formation of the bones in the wrist, arm or clavicle. Though Wade’s heart defects were detected in utero, it was not until the moments after his birth that his doctors observed the underdevelopment of his hands. Each thumb was protruding from the base of the index finger, and the left thumb in particular seemed to lack independent functionality. Genetic testing would later confirm Wade’s diagnosis of Holt-Oram.

At around 2 weeks old, Wade began experiencing respiratory problems and was admitted to Children's Hospital of Philadelphia (CHOP), breathing at nearly three times the normal rate, likely caused by his underlying heart issues. “It was a lot to deal with all at once, and more than we could manage at home, so I felt like we were just handling each day as it came,” says Mallory. Luckily, echocardiograms showed that Wade’s heart was gradually improving on its own, which is not always the case for children with Holt-Oram. Over time, the holes completely closed up without need for any medical intervention. “We really couldn’t believe it,” says Mallory. “We felt like it was a miracle that it happened the way it did, and that we didn’t have to deal with extended cardiac problems.”

Focusing on the left hand 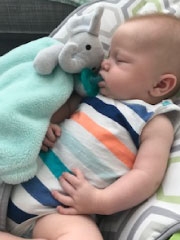 As Wade’s heart continued to improve, Mallory and Jon were able to turn their attention toward possible treatments for Wade’s hands, hoping to improve his dexterity and help him more easily engage with his physical environment. They began with a consultation with Benjamin Chang, MD, Co-director of the Hand Transplantation Program at CHOP and a specialist in reconstructive surgeries for the upper extremities.

It was quickly determined that Wade would likely benefit from successive pollicization surgeries — a technique in which a thumb can be crafted through materials from an existing digit, typically the index finger. As Jon recounts, “Dr. Chang walked in and was very confident and reassuring, explaining what would have to be done, what the recovery period would look like, and so on. We knew that Wade would likely need the surgery on his left hand for sure, but we were going to try and wait it out with his right hand, which wasn’t quite as bad. We were very pleased at how comforting Dr. Chang was and how confident he was in his ability to improve the functionality of Wade’s hands.”

At 1 year old, and with his heart condition fully under control, Wade underwent his first pollicization procedure. “It was just a lot of anxiety and uncertainty going into the whole thing — not knowing how it would go for us, how he would respond, and making sure that we were comfortable with the decision we had to make as parents,” says Mallory.

The four-hour procedure was followed by a single overnight stay in the hospital. Wade’s hand remained in a cast for two weeks, during which time three of Wade’s digits were exposed. A small hole in the cast above the thumb allowed for monitoring of movement and circulation. Dr. Chang explained to the Weavers that they were unlikely to see much functionality for at least six weeks, while Wade transitioned out of the cast and into a splint. “That was pretty much spot on, and I personally didn’t realize how long it would take for him to really start moving his fingers in that first month,” says Mallory. “After that we had follow-ups with Dr. Chang pretty much every month,” says Jon. “Not only for his left hand, but because we were also still watching his right hand, deciding if we wanted to do the same surgery.”

Surgery for the right hand

Happy with the positive results they were seeing from the first surgery, the Weavers decided that Wade would benefit from pollicization surgery on his right hand as well, which was scheduled for a few months later. Wade, now 2 years old, is several months out from his second surgery, and continues to see daily improvement in the functionality of both hands. “His left hand is pretty good at this point and he’s using his thumb more and more, but sometimes he doesn’t want to,” says Mallory, “He’s still learning, and it’s a long process for him to figure it all out and build up the strength he needs.”

Wade has proved to be an active and otherwise healthy little boy. “He’s so smart, and has a huge vocabulary,” says Jon, “and he is very much mobile. He loves to kick and throw any type of ball, and he’s now able to open his books and turn the pages. He also really enjoys carrying around golf clubs and baseball bats, which has been a really wonderful way to help his recovery and get him used to manipulating objects with hands. He’s as happy as can be.” 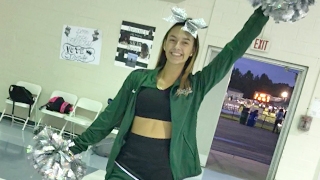 Pain-free and Back in Action

After surgery for a rare hand condition, Natasha is back to cheerleading and playing softball.