For the first few months of Amelia’s life, it seemed as if every week brought a new diagnosis. It wasn’t until she was close to her second birthday that her family received confirmation that Amelia had the rare genetic disorder Kabuki syndrome, which tied all her symptoms together. 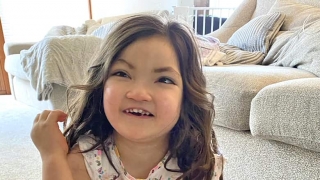 “It was bittersweet to find out,” says Amelia’s mother, Jessica, whose own Internet digging had led her to suspect Kabuki syndrome. “Luckily, we have Children’s Hospital of Philadelphia not too far away, and every element of her care was already being taken care of. We didn’t change directions at all; we just better understood what we’re facing.”

People with Kabuki syndrome have distinctive facial features, a wide range of symptoms and broad spectrum of severity. The name comes from a form of Japanese theater called kabuki because the facial features of many affected children resembled the makeup used by kabuki actors. Because Amelia’s father, Ray, is Filipino, her Asian-like features didn’t seem unusual.

Amelia, now 5, has many of the common Kabuki syndrome symptoms — hyperinsulinism, feeding difficulties, frequent infections, small stature, developmental delays, and heart, skeletal and gastrointestinal anomalies — but most are in the mild-to-moderate range and several have been fixed.

“When I told her pediatrician I thought Amelia might have Kabuki syndrome, she had never heard of it and referred us to Genetics,” Jessica says. That’s not too surprising given that, while the exact incidence of Kabuki syndrome is unknown, it is estimated to be about 1 in 32,000 to 86,000 live births.

“When we met with (geneticist) Dr. Elaine Zachai at CHOP, I didn’t mention Kabuki because I didn’t want to plant the seed,” Jessica says. “But she knew right away from examining Amelia and knowing her medical history.”

Genetic testing confirmed the diagnosis. Amelia had Kabuki syndrome (KS) type 2, caused by a mutation in the KDM6A gene, a rarer form affecting about 5% of those with KS.

It was an imperforate anus, when the normal opening that would allow stool to leave the body was too small to function, that brought Amelia to CHOP from her birth hospital in Lancaster. She had a temporary colostomy at 2 days old, and surgical repair at 1 year old.

During that first stay, Amelia was in the Harriet and Ronald Lassin Newborn and Infant Intensive Care Unit for two months. She had trouble feeding because she aspirated liquids, meaning some would go into her lungs, and she vomited frequently. To get enough nutrition, she needed a nasogastric (NG) tube, so formula could go directly into her stomach.

She had frequent low blood glucose, which was eventually diagnosed as congenital hyperinsulinism (HI). Her pancreas secreted too much insulin and that kept her blood sugars too low; low blood sugar (hypoglycemia) can cause seizures and brain damage. Luckily, Amelia’s HI is relatively mild and can be controlled with regular feedings and no medication. Approximately 1% of HI patients also have Kabuki syndrome, and a few years ago Kabuki syndrome screening was added to the HI genetic testing panel, so now children with this dual diagnosis will find out sooner.

Surgeries for Heart and Hip Defects

Early on, Amelia was diagnosed with an atrial septal defect (ASD), a hole in the wall between the two upper chambers of her heart. Doctors were hoping it would close on its own, as many do. But a six-week stay in the Pediatric Intensive Care Unit in early 2020 changed that plan. Amelia was admitted with two viruses, Adeno and Corona — not the COVID-19 variant — and needed to be intubated. Her cardiologist, Matthew Elias, MD, decided the ASD was making it harder for Amelia to reoxygenate her blood, and once recovered, the successful repair surgery was done a few months later in July.

At birth, her hips were discovered to be dislocated. “They formed out of the socket,” Jessica says. Orthopaedic surgeon Wudbhav N. Sankar, MD, who specializes in hip conditions, repaired them one side at a time. “Amelia is so much more comfortable now,” Jessica says. “Before, she didn’t like to sit, but now her hips are solidly in the sockets. It made such a big difference. We’re very lucky to have Dr. Sankar.” 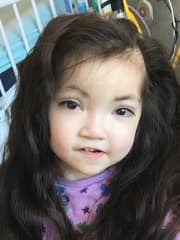 Most children with Kabuki syndrome have some degree of developmental delay and intellectual disability, and Amelia is in the moderate range. She’s had early intervention for speech, physical and occupational therapies, beginning at 3 months old. As a result of hypotonia (weak muscle tone) she’s not walking yet, but cruising and crawling everywhere. Her speech is improving, with a lot of babbling, and she has recently begun saying several new, unprompted words.

Amelia loves music and often requests her favorites to be sung by whoever is nearby. She likes to dance with her big sister, Eloise, and has giggling fits when they fall down. She checks on her 5-month-old brother Julian, mostly to make sure he isn’t playing with her toys.

Her favorite toy is a rattle-type ring she’s has since she was a baby. She likes to be outside, playing on the trampoline, or swinging on the swings. Her favorite place in the house is by our large windows looking at the backyard.

CHOP as a Steadfast Partner

With so many surgeries, hospitalizations and ongoing conditions to manage, Amelia’s family is glad to have a partner in CHOP.

She is a regular at the Kabuki Syndrome Clinic, a collaboration among the specialties many KS patients need. The core clinic team, led by clinical geneticist Kosuke Izumi, MD, PhD, also includes a pediatric endocrinologist from the Congenital Hyperinsulinism Center, a genetic counselor, molecular geneticist, gastroenterologist, immunologist and nutritionist. Additional pediatric specialists join the team as needed.

“Having a child with Kabuki was certainly unexpected,” Jessica says. “But if you’re going to have it, CHOP is the place to be, because they really understand what Amelia needs and have every specialist she needs. Everyone is amazing.”