Jennifer and Michael had a lot on their plate. Their son was born with a severe heart defect that required three surgeries in four years and put him at-risk for neurodevelopmental issues. The first-time parents were afraid they would miss signs that their son, also named Michael, was lagging behind other children his age. Fortunately, they had a team of experts to turn to. 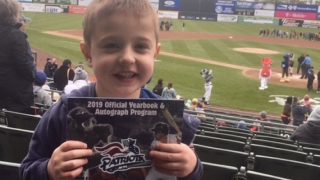 The couple enrolled their son in the Cardiac Kids Developmental Follow-up Program at Children’s Hospital of Philadelphia (CHOP). The program pulls together pediatricians, nurses, psychologists, social workers, and physical, speech and occupational therapists to identify problems early and coordinate intervention and treatment. The team consults with cardiology.

“I cried more at the CHOP (Cardiac Kids) developmental graduation than I did at his preschool graduation,” says Jennifer. “It was a relief to know that someone else was there.”

As it turned out, Michael, now 6, is not only thriving in all developmental areas, his social skills, personality and love of baseball has won him a spot as the unofficial mascot of a minor baseball league team in the region. He has thrown out the ceremonial first pitch at multiple games and can run the bases without stopping to catch his breath. 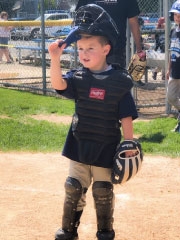 Jennifer and Michael live in New Jersey, nearly two hours from CHOP, but they knew CHOP was the best place to be after their baby was diagnosed prenatally with hypoplastic left heart syndrome (HLHS), a severe heart defect in which the left side of the heart is underdeveloped.

A month later, Michael went home with a feeding tube. Within two weeks he was strong enough to  breastfeed without supplementation, and the feeding tube was removed. Michael was closely monitored through CHOP’s Infant Single Ventricle Monitoring Program until his second staged surgery at 6 months old. He now sees pediatric cardiologist Sumekala Nadaraj, MBBS, FAAP.

The Cardiac Kids Developmental Follow-up Program at CHOP provided continued reassurance as Michael grew older. His parents were diligent about following the team members’ advice. They did exercises to help their son walk with his heels firmly planted on the ground, instead of on his tippy-toes. They did puzzles with him and read books together. They let their son turn the pages.

“If I didn’t have that, I would continuously question whether he was behind in development because I don’t know how to test it,” Jennifer says.

One of the first signs that Michael was keeping up with — and in some cases, surpassing — his typically-developing peers happened when he was just 8 months old. Michael scooted up to his father in his walker and cheerily called out his very first words: “Hi Dada!” 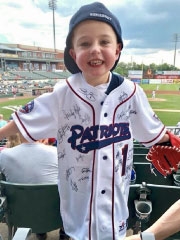 Michael was swinging a baseball bat by the time he was 18 months, and from there, his fascination with the sport grew. Neither of his parents are huge fans of baseball but nurtured their son’s interest by bringing him to high school games and watching their local minor league team, the Somerset Patriots. Before Michael’s third and final surgery at CHOP, his father asked the Patriots if his son could meet the team.

“Next thing you know, he’s running the bases and they’re teaching him how to throw the ball,” says Jennifer. Michael’s weak heart didn’t hold him back. He would stop at each base, catch his breath, then run to the next.

The effort earned him the team nickname, Warrior Mike. While Michael was recovering from his third surgery, each player recorded a get-well video. Three days after he was discharged from CHOP, Michael was back on the field, throwing out the first pitch at a high school all-star game. A few days later, the Patriots surprised him with a gift: A Patriots jersey emblazoned with the number 1 and his name, Warrior Mike.

“After his surgery, he was running the bases without stopping and telling the guys that they’re slow.” 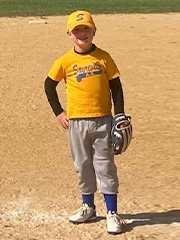 Michael’s still running the bases. He now plays on a Little League team. Even though he's only 6, he was asked to try out for the 8 and under travel baseball team.

Grateful and moving ahead

His parents look back over the last five years and are grateful for their son’s good health and for the support they receive from CHOP. As for Michael, he misses his monthly visits.

“Michael keeps asking me, when am I going back to play with my nurses?’” Jennifer laughs.