Tassos is an extraordinary child for many reasons: He’s an exceptional student, a talented artist and dancer, a loving son and brother.

He is also a hypoplastic left heart syndrome (HLHS) survivor. 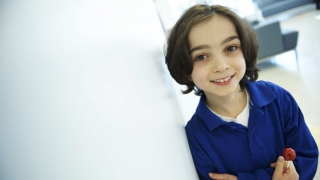 In 2001, when his mother, Kristen, was 18 weeks pregnant, an ultrasound showed a major heart defect.

When several doctors told her and her husband (also named Tassos) that their baby was unlikely to survive and faced a grim future if he did, they still didn’t give up hope.

The search for the best hospital to treat Tassos' HLHS

Kristen and her husband began a search for the very best hospital for their son — and soon found themselves at the Cardiac Center at The Children’s Hospital of Philadelphia (CHOP). They made the two-and-a-half hour drive and met with several doctors who told them there was plenty of hope.

Their son, still in the womb, became a patient of Jack Rychik, MD, attending cardiologist and medical director of the Fetal Heart Program at CHOP. This program specializes in the detection, evaluation and management of fetal heart defects prior to a baby's birth, and offers a team of leading experts in the diagnosis of fetal heart defects, such as HLHS.

Five months after their first visit, Kristen delivered Tassos in Philadelphia. He was immediately transported to CHOP.

Four days later, Thomas Spray, MD, chief of Cardiothoracic Surgery at CHOP and a world-renowned cardiothoracic surgeon, performed the stage I operation needed for HLHS, known as the Norwood procedure. Children with HLHS have three surgeries, known as staged reconstruction, to reroute the circulation of blood through the heart. After the surgeries, the heart functions as a one-sided, instead of two-sided, pump.

Tassos recovered quickly from his surgeries. He grew normally and was speaking in full sentences by a year-and-a-half. In June 2005, after his stage III operation, known as the Fontan procedure, to treat HLHS, all was well.

“He was absolutely perfect until July 2008,” his mother recalls. “For three years we hardly visited Philadelphia. Then our lives were shaken up again. I picked him up from camp in July and his legs were swollen.”

As the parents of a single ventricle survivor, they knew the cause might be a disease called protein-losing enteropathy (PLE).

Protein is one of the building blocks of the body. It is manufactured by cells and is abundant throughout the body. In some single ventricle survivors, protein begins to breach the lining of the blood vessels and leak into the intestines, where it is eliminated through the stool. The body can’t make enough protein to keep up. Symptoms include severe swelling and loss of calcium from the bones. PLE can be fatal.

Tassos’ parents immediately called Dr. Rychik. After several tests, he confirmed Tassos had PLE. Soon Tassos’ belly was also swollen. The family traveled to CHOP for cardiac catheterization, endoscopy of the gastrointestinal tract, bone scans and other tests. Dr. Rychik put Tassos on budesonide, a steroid his own research showed to be an effective treatment for PLE in single ventricle survivors.

“Tassos had a dramatic response,” Kristen recalls. “We saw his body come back.”

Tassos has recovered beautifully. PLE has affected his growth: Now 9, he is small for his age. Otherwise, “He is living a very normal life,” Kristen says.

Tassos is a gifted artist and talented dancer, studying ballet, tap and jazz. Now in third grade, he is studious and has many friends. In addition to a low dose of steroids, Tassos takes a blood thinner.

“It’s been nice to have him as a little boy who can sit and draw,” his mom says. “He’s not a rough-and-tumble kid.”

As “single ventricle survivors” get older, doctors are recognizing that, while some do fine, many experience complications, including lung, liver and gastrointestinal diseases. Dr. Rychik is an international leader in research, diagnosis and treatment of single ventricle heart defects with a focus on the challenges faced by survivors. For Tassos and many others his efforts have great meaning.

Tassos visits Philadelphia every six months as a patient of the Single Ventricle Survivorship Clinic, part of the Fontan Rehabilitation, Wellness, Activity and Resilience Development (FORWARD) Program, led by Dr. Rychik. The program brings together doctors from different specialties to care for single ventricle survivors. One of their goals is to develop protocols for screening and treatments. Tassos sees Dr. Rychik, and a gastroenterologist and an endocrinologist with special expertise in single ventricle survivors.

“It is something that sits with you every day and causes a lot of angst,” Kristen says. “But I remind myself that 20 years ago there wasn’t a lot of treatment at all for HLHS and now we have very good survival rates.”

The family takes heart in knowing Tassos is a patient of one of the world’s best medical teams; the experts pursuing the breakthroughs that will lead to new treatments for PLE and other diseases.

“Every night we say a little prayer for all the researchers and all the doctors,” Kristen says, “that they continue to make more progress.”

Breakthrough stories like Tassos' are made possible in part thanks to generous donations to the Cardiac Center. With your support, we can provide innovative care, pioneering treatments and lifesaving cures to more children — today, tomorrow, and for years to come. 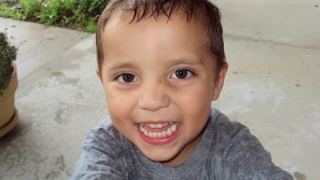 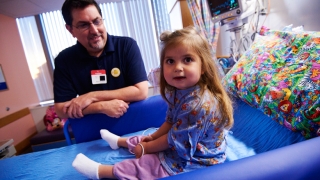 When it was time for Lilly to have her third surgery for HLHS, her parents made the decision to travel 2,300 miles from home to the Cardiac Center at CHOP.