People often think models are born looking perfect — wide eyes, high cheekbones, long legs and perfect posture. Jillian Payne was born with all of these features — except the straight posture. 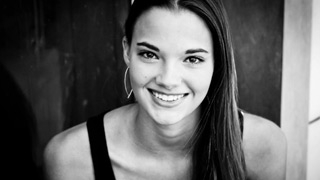 Jillian learned at age 15 that she had idiopathic scoliosis, a spine deformity that caused her spine to curve unnaturally. But thanks to spine surgery at The Children’s Hospital of Philadelphia, she’s now a successful model for some of the top brands in the fashion industry, and has even walked the runway during Fashion Week in New York City.

Growing up, Jillian was an active kid — running, biking and playing volleyball. One of triplets, Jillian kept up with her siblings most of the time. She only noticed a difference when the family would walk around the mall for long periods of time. Then, Jillian’s back would begin to ache a bit and she needed to rest more frequently than her brother and sister.

It was a friend’s observation in the summer of 2010, when Jillian was 15, that led to a startling discovery. “We were at the pool when she looked at me and said ‘your back is really curved,’” Jillian says. The friend’s mom has scoliosis and the teen recognized the familiar “s” curve of Jillian’s spine.

Jillian went home and talked to her mom. Together, they went to a local health clinic for an exam and X-ray. The doctors encouraged her to see an orthopaedic specialist. One of Jillian’s cousins — who happened to be a surgeon at a hospital in Miami, FL — recommended John M. Flynn, MD, a nationally recognized spine surgeon at The Children’s Hospital of Philadelphia.

A few weeks later, Jillian and her parents made the 2-hour drive from their home near Scranton, PA, to Philadelphia to meet with Dr. Flynn. He confirmed what they had suspected: Jillian had idiopathic scoliosis. This curvature of the spine can be rotated or twisted, creating a multidimensional curve, and the condition usually becomes apparent in adolescence.

The cause of idiopathic scoliosis remains a mystery, but physicians and scientists at CHOP are leading research into new treatment options for what is the most common spinal deformity in the world.

Some patients with idiopathic scoliosis can be successfully treated with bracing. But because the degree of the curve in Jillian’s back was 47 degrees, Dr. Flynn suggested spine fusion surgery.

“Dr. Flynn recommended surgery. He didn’t believe wearing a brace would help because my spine was already too curved,” Jillian said.

For Jillian and her family, it was a tough choice to make. Ultimately, they decided they felt comfortable with Dr. Flynn, who had more than 15 years of experience performing the spine surgery Jillian would receive.

“Dr. Flynn was awesome. He was friendly and approachable,” Jillian says. “I just felt like I could trust him.”

From surgery to photo sessions

On Dec. 6, 2010, Jillian had posterior spinal fusion surgery at The Children’s Hospital of Philadelphia. During the surgery, Dr. Flynn corrected the curve of Jillian’s spine, and then fused several vertebrae in her lower back together with steel instruments to ensure the correction would be permanent. After the surgery, she had a small scar on her lower back.

Jillian spent a week at the Hospital recovering from surgery before returning home to Dallas, PA, to continue her rehabilitation as an outpatient. After strengthening her core and regaining some of her flexibility, she returned to high school in late January 2011.

By June 2011, Jillian had finished her sophomore year of high school and completed her weekly rehab sessions. That summer, while Jillian was sunbathing and swimming with friends, one of them took a few candid photos to remember the day. When Jillian saw the photos, she noticed the difference that spine surgery had had on her 5’9” frame.

She liked the pictures so much she decided to submit them to a few modeling agencies. It was a shot in the dark — modeling wasn’t something she’d even considered the year before — but now she wanted to try.

“Two days later, I got an email saying ‘come to New York.’ I thought ‘this can’t be real’ but my mom called them and checked everything out,” Jillian said. “Within a week I was in New York with my mom, getting test shots taken and talking to an agency about representing me.”

Within months, the slim brunette was a fashion model in New York City.

The scar on her lower back from her surgery is very light, Jillian says. When she models something in which the scar is visible, a photographer may ask her about it, but it can always be removed with photo editing.

“I think a lot of girls who are considering surgery for scoliosis worry they’ll have this awful scar on their back afterwards,” Jillian says. “It’s really not like that. My scar is hardly noticeable.”

Jillian is now 19 and still modeling professionally, but not full time. The money she’s earned as a model is helping her pay for college. She’s in her second year of a 6-year pharmacy program at Duquesne University in Pittsburgh, PA.