For siblings PJ, 13, and Alana, 11, every day is filled with small but meaningful victories that hint at the breakthrough treatment they received at Children's Hospital of Philadelphia (CHOP). Sitting at a school lunch table with peers. Eating pizza. Touching anything with nuts. And best of all, no longer living in constant fear of a severe allergic reaction to certain foods. 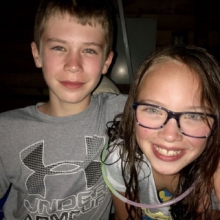 Both siblings have IgE-mediated food allergies and were successfully treated with oral immunotherapy (OIT), a novel treatment approach spearheaded at CHOP. In oral immunotherapy, children eat very small amounts of the food or foods they are allergic to, and gradually become desensitized to its effects.

Their mother, Shannon, could not be more grateful to CHOP and encourages other parents considering oral immunotherapy (OIT) to "go for it."

"I know it can be scary, but it was worth the risk because OIT can be so life-changing for your child," Shannon says. "It gave my kids a new lease on life and made them more resilient. The peace of mind it gave my family is priceless."

PJ's food allergy odyssey began when he was just a toddler and his family received a panicked call from daycare. PJ's skin had touched peanuts and he broke out in a rash.

Shannon gave PJ an antihistamine and took him to a local allergist who confirmed the toddler was allergic to peanuts, a condition that affects one in every 50 children. PJ was given a prescription for epinephrine and told to avoid peanuts.

Given PJ’s challenges, Shannon did all she could to try to help her newborn daughter Alana avoid developing food allergies. But when Alana broke out in raw eczema patches while nursing and later developed stomach issues, Shannon knew something was wrong.

Early blood tests revealed Alana was allergic to peanuts like her brother, but also other nuts, along with wheat, egg, dairy and soy. All the food allergies were IgE-mediated allergies and produced immediate adverse reactions when the children encountered the "trigger" food or foods. 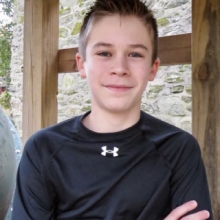 Shortly after Alana's diagnosis, Shannon sought help from CHOP's allergy team and was referred to Jonathan Spergel, MD, PhD, chief of the Allergy Program at CHOP. Dr. Spergel managed the children's care, but also shared news about promising new research and clinical trials related to food challenges in which CHOP was involved. He asked Shannon if her family would be interested in participating in the future. She was intrigued.

When PJ was 8 years old, he was selected for a double-blind, multifaceted study led by Dr. Spergel. The goal of the study was to determine if pretreatment with an anti-IgE therapy would allow for faster and safer desensitization with oral immunotherapy. The therapy is an injectable medication used for patients with moderate to severe allergic asthma and works by blocking the IgE that binds to allergens and causes the reaction.

“It was the first time we had hope that something might change,” recalls Shannon. Still, there were risks to the study medication and oral immunotherapy itself. PJ would have to ingest miniscule amounts of peanuts and he could have a severe adverse reaction. Shannon asked PJ what he wanted to do and he said he was willing to try.

PJ had severe reactions in the first study and his family later learned he was receiving a placebo instead of the study medication. Soon after, he was able to start OIT – this time with the pretreatment medication — and it was successful.

At first, PJ struggled to eat the daily dosage which included powder from about 1/50 of a peanut mixed with a food of his choice. He had to return to the hospital every two weeks for a gradual dosage increase under clinical monitoring.

By the end of two years, PJ could safely ingest 4 grams of peanut protein (equal to 17 whole peanuts) without severe adverse reactions. 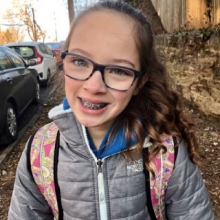 While PJ was undergoing OIT, clinical team members approached Shannon about the possibility of Alana, then 7, participating in a separate study for children with multiple food allergies.

"I had done all the research and knew without doubt that I wanted her to participate,” Shannon says. Alana, who was one of the first children in the new clinical trial, was also excited to participate.

All study participants received four shots of the pretreatment medication before oral immunotherapy began. Over the next 10 months, Alana was desensitized to milk, sesame, walnuts, cashews and hazelnuts. For Alana to remain desensitized, she needed to continue to eat small doses of her allergens regularly, which her mom baked in brownies and Alana enjoyed for years. For more than 2 years, Alana continued her daily dose and remained safe from adverse reactions.

A setback, then new support

That changed abruptly when Alana was 10 years old. Instead of easily eating her special brownie with allergens mixed in, she had a severe allergic reaction. Her throat burned. She had trouble breathing. She went into anaphylactic shock.

Quickly, her mom gave her Benadryl to calm the allergic reaction. Then, Alana vomited and her breathing became more labored. Shannon injected Alana with epinephrine (Auvi-Q®), and when symptoms did not subside quickly enough, gave her a second injection, and then called 911. Operators urged her to take Alana to the hospital immediately.

At the local hospital, doctors gave Alana additional medications to calm her body's allergic reaction and resume normal breathing. When Alana was feeling better, she was released home with the instructions to make an appointment with her regular allergist.

Shannon called CHOP's Food Allergy Program to alert them of the incident and discuss next steps. The following week, the family returned to CHOP. The clinical team discussed the possibility of Alana participating in food challenges to figure out what had caused her severe reaction.

Alana flatly refused. She was terrified to eat anything – even under hospital supervision – that might cause another severe reaction. "The experience was earth-shattering to Alana," her mother says. "Though she recovered physically from the attack, it was challenging for her to recover emotionally and psychologically from the event."

Alana was fearful of eating anything not made at home, going out with friends, and even leaving her mother's side. Shannon knew she needed help to support Alana and aid in her recovery. She asked the Food Allergy team for suggestions.

The team suggested Alana might benefit from a new, one-of-a-kind clinic at CHOP – the Food Allergy Bravery (FAB) Clinic. The family agreed.

The FAB Clinic, a cross-disciplinary team led by Katherine Dahlsgaard, PhD, ABPP, a psychologist, and Megan O. Lewis, MSN, CRNP, a pediatric nurse practitioner in Allergy, gave Alana tips and tools she could use to keep herself safer from her food allergies, such as: handwashing before and after eating, avoiding cross-contamination from serving utensils, and learning how to approach workers in public to ask if any prepared food she wanted to eat contained her allergens (and therefore, should avoid).

At the FAB Clinic, Alana also engaged in "bravery challenges" designed to remind her that she can be around her allergens and keep herself safe. She overcame her anxious over-avoidance by practicing sitting next to her allergy foods, smelling them, and even touching them (followed by washing her hands, of course). She also practiced eating new, allergen-free foods, as well as safe foods without her mother present.

"Alana thrived in the program," Shannon says. "Through repeated 'brave' practices, she slowly regained her self-confidence."

Alana now understands which foods and practices are "safe enough" – foods she can be near but not eat – without having an allergic reaction.

"Alana's anxiety and fear regarding food have been greatly reduced during her time with the FAB clinic," her mom says.

“She is more empowered and feels a sense of control over what's happening with her own body.”

Today, both PJ and Alana are doing well despite changes in their allergens and treatments. PJ no longer participates in oral immunotherapy, while Alana has begun again.

Shannon can’t say enough positive things about the Food Allergy team at CHOP, including Dr. Spergel; Megan O. Lewis, MSN, CRNP, nurse practitioner and program manager for Allergy Research; Courtney Rooney, BSN, RN, clinical research nurse coordinator with the Division of Allergy and the Food Allergy Center; and others who have become like extended family. She's also impressed by her two children who have battled extraordinary obstacles, learned more about themselves and become more resilient.

Thanks to CHOP, she says, PJ and Alana no longer self-conscious about what they can and can't eat. They don't have to sit at allergy-safe tables a school or pack special foods when they go out to eat as a family. They continue to carry epinephrine with them, in case an emergency should arise, but they are no longer letting fear run their lives.

"They've learned so much about themselves, and how resourceful they can be on their own," Shannon says. "It's hasn't exactly been smooth sailing, but they learn more with each wave they overcome."