Beyah has come a long way since having lifesaving open-heart surgery at Children’s Hospital of Philadelphia (CHOP) when she was just a few days old. Today, she is an energetic, happy toddler who loves singing and dancing, and her parents joke about how she enjoys “wreaking havoc” with her two older sisters.

Phoebe and Matt learned that something was wrong with their baby at a routine 20-week ultrasound in January 2015. “The doctor came in and said, ‘We have a major problem.’ My heart just sank,” remembers Phoebe.

The doctor diagnosed their unborn child with an interrupted aortic arch, a serious heart defect in which there is a break between the top part of the aortic arch and the lower, descending aorta. Children with interruption of the aortic arch almost always also have a large ventricular septal defect (VSD), or a hole in the wall between the two lower, pumping chambers of the heart. This was the case for their baby.

Phoebe and Matt were told that there was no guarantee their child would survive after delivery. But they weren’t prepared to give up.

A week later, the couple had an appointment at CHOP’s Richard D. Wood Jr. Center for Fetal Diagnosis and Treatment. Doctors confirmed their baby’s diagnosis — and gave Phoebe and Matt hope.

“They acknowledged that there was a serious issue with our child’s heart, but they told us that they could help,” says Phoebe.

“It was a breakthrough moment — life was put back into me. They gave us hope that our child could survive.”

For the next four months, Phoebe and Matt continued to come to CHOP for testing.

“It was a whole new world for us,” says Phoebe. “We would read about the families that have found success at CHOP. It would give us such great hope and confidence.”

“You never think that something like this could come into your life,” says Matt. “It can be a very scary situation. When you go through it, it changes you as a person. But we felt so fortunate to be at CHOP.”

Beyah was born in May 2015 in the Garbose Family Special Delivery Unit (SDU), the first birth facility in a pediatric hospital designed for healthy mothers carrying babies with known birth defects. Moms can stay close to their newborns, and babies receive the treatment they need immediately after birth.

Just a few days after Beyah was born, she had open-heart surgery. Thomas Spray, MD, Chief of the Division of Cardiothoracic Surgery, performed the procedure. Dr. Spray made the aorta into a continuous vessel by stitching the top part of the aortic arch and the descending aorta together. He tied off the ductus arteriosus and closed the ventricular septal defect by stitching a patch into the muscle of the heart. Beyah was discharged in the beginning of June.

“Three months after her surgery, her cardiologist characterized her heart as pristine,” says Matt.

“They remarked that her heart looked beautiful — it was such an amazing thing to experience..” 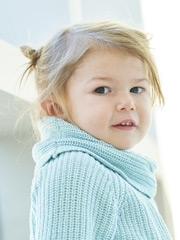 Now 2, Beyah loves dancing, singing, playing outside and learning, and her parents joke that she has enough energy to “wreak havoc” with her older sisters.

Since her surgery, Beyah hasn’t had any complications. She’s eating and growing normally, and she’s hit all of her developmental milestones.

Beyah comes back to CHOP for annual follow-up appointments with Anita Szwast, MD, an attending cardiologist with the Cardiac Center. She also sees therapists and a neuropsychologist as part of the Cardiac Kids Developmental Follow-up Program, which provides screening, evaluation and coordinated care for children with complex congenital heart disease (CHD) who have or are at risk for neurodevelopmental issues.

Reflecting on their journey, Phoebe and Matt appreciate CHOP’s multidisciplinary approach to care and all of the emotional support that they have received at CHOP.

“We are so grateful for all of the support and compassion we found at the time we were most vulnerable. From the doctors, nurses and psychologists to the child life team and the front desk staff, everyone we encounter is amazing.”