First came a summer asthma diagnosis for 12-year-old Jacob, an active Boy Scout and musician who loved jumping off the diving board into his neighborhood pool. Suddenly, Jacob was hospitalized for severe weight loss by early fall. 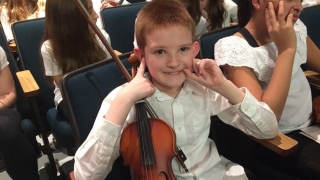 “He was this beautiful, healthy, physical specimen, and then he looked like skin and bones,” his father, John, says. Instead of gobbling a whole slice of his favorite Costco pepperoni pizza, he would eat just a few bites and push it away. Down to 60 pounds at four-and-half-feet tall, Jacob was so weak and short of breath, “he could barely walk down a flight of stairs.”

Today, Jacob breathes easier and has gained 30 pounds, thanks to the diagnosis of, and coordinated care for, an uncommon lung condition at Children’s Hospital of Philadelphia (CHOP).

As a child living with functional autism, Jacob rarely complains, his dad says. Instead, his father learned to recognize signs of struggle.

“He puts his hands on his hips and pushes his shoulders forward. I can see him sucking for air,” his father says.

“They told us whatever we are dealing with, it is bad news and super rare,” says John.

Jacob’s pulmonologist told the family he wanted to get help and contacted CHOP for assistance. After that hospital visit, Jacob needed a wheelchair and supplemental oxygen to help him get through the day and sleep through the night.

Soon after, Jacob traveled with his dad for a lung biopsy at the Interstitial and Diffuse Lung Disease Center at CHOP. Lisa R. Young, MD, Chief of the Division of Pulmonary and Sleep Medicine, shared images of Jacob’s lungs and his diagnosis. The “little white twigs,” Dr. Young explained to Jacob, represented damaged airways in his lungs, a condition known as children’s interstitial and diffuse lung disease (chILD). The cause remains unknown.

“We had an unusual situation and it seemed like we got the right people to help us,” John says.

ChILD is a broad term for a collection of rare lung disorders caused by scarring in the lungs. As lung tissue thickens, children lose their ability to breathe and oxygenate their blood. Diagnosis can be difficult, requiring a lung biopsy and/or CT scan. Symptoms like shortness of breath overlap with more common childhood conditions like asthma or other respiratory ailments. The ChILD Center is part of CHOP’s Rare Lung Diseases Center.

“Dr. Young showed us the images and helped us understand how much they don’t understand about what goes on in the lungs,” John says.

Working through a model of shared care between CHOP and Jacob’s medical specialists in Virginia, Dr. Young oversees his care. A regimen of steroid medications – both oral and inhaled – have helped calm lung inflammation and stoke Jacob’s appetite. When Jacob suffers a setback, such as a cold or cough that makes breathing harder, his home medical team consults with CHOP specialists. He makes regular quarterly visits to CHOP to track his progress. Comprehensive care back home includes, for example, a physical therapist. On Jacob’s most recent trip to Philadelphia, he met with a CHOP pediatric dietitian. Foods like apple-flavored Ensure boost his daily caloric intake.

“One of the things I have been happy about is the collaboration with our local pulmonologist and CHOP. They go back and forth. That has been amazing,” his dad says. 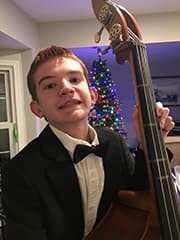 These days, his father says, Jacob’s pulse oxygenation registers at a robust 95 or above. On a recent trip to Bob Evans for his favorite hash browns and bacon, Jacob surprised the family by sprinting across the parking lot to the restaurant door. Today, the 15-year-old loves watching YouTube videos of school buses and trains (his favorites), singing Johnny Cash with his music teacher, playing his stand-up bass and swinging on the backyard swing.

And while Jacob’s prognosis remains uncertain, the family celebrates some return to normalcy. As pandemic isolation eased last fall, Jacob returned to school full time as a high school freshman without his wheelchair. On outings from home, the family keeps the wheelchair close by or Jacob asks for a piggyback ride from his dad. At 99 pounds, Jacob could gain a few more, his dad said.

“He looks like Jacob again. CHOP saved us,” John says. “Our pulmonologist knew his limitations and reached out to CHOP, and CHOP reached out to us. At CHOP, they were honest with us. His prognosis is uncertain but Jacob is better. He is gaining weight. He is moving around better. He doesn’t look like he is dying anymore, and he can eat full meals. All of those are signs that the collaboration is bearing fruit.”